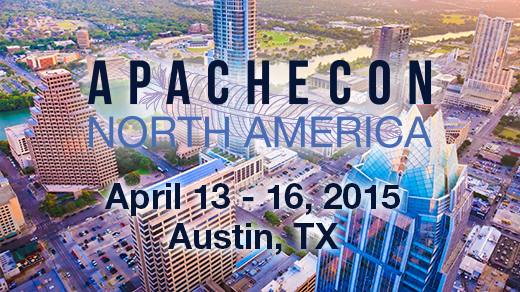 The Apache Software Foundation is excited to invite you to ApacheCon North America, which we'll be holding in Austin, Texas, April 13th - 16th.

This event marks a couple of important anniversaries for us. It's been 15 years since the first official ApacheCon, which we held in Orlando in march of 2000. (There was an earlier ApacheCon, but the Apache Software Foundation hadn't been incorporated at that point.) It's also been 20 years since the initial release of the Apache HTTP Server, the project that started it all, and one of the most influential projects in all of the open source landscape. We'll be celebrating that by having Brian Behlendorf, the instigator of Apache httpd, keynote. But although he might spend some time nostalgically looking back, he'll be setting the tone for the rest of the event by mostly looking forward.

The Apache Software Foundation is so much more than just the web server, with 161 top-level projects, as well as many other ongoing efforts.

Gina Likins, from the Open Source and Standards team at Red Hat, will be talking about "How to Thoroughly Insult and Offend People in Your Open Source Communities, or "Your #$%@ $%@&ing sucks and I $%@&ing hate it." Drawing from years of experience, this tongue-in-cheek talk will show you the many things that you're doing to drive away new participants in your project, and annoy the existing ones.

Jay Schmelzer, Director of Program Management at Microsoft, will give a talk entitled "20 Years of Valuable Lessons for the World", in which he'll discuss the recent open sourcing of Microsoft .NET, and the decisions made in the way that the .NET Foundation has been set up.

Andy Terrel, Chief Science Officer at Continuum Analytics, will be talking about the really cool stuff that he and his team are doing in the field of data science, and why Open Source is a critical component of that work.

Of course, that's just the start. ApacheCon features three days of content about our various project communities, with talks about big data, mobile, science and healthcare, community, and more.

On Thursday, we'll have CloudStack Days, the Traffic Server Summit, and a full day of Apache Spark content, as well as the always-popular Apache BarCamp, the Apache Unconference.

Register by March 21st to take advantage of the earlybird pricing, and come rub elbows with the people that make Apache software happen.

This article is part of the Apache Quill column coordinated by Rikki Endsley. Share your success stories and open source updates within projects at Apache Software Foundation by contacting us at open@opensource.com.

What to read next
Tags
Business
ApacheCon
Rich Bowen