Unschooling is the open source way 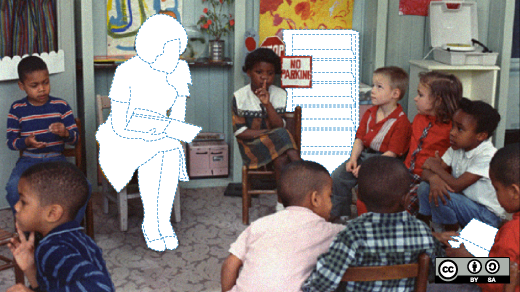 Unschooling is an approach to education that follows a child’s innate curiosity and desire to learn. It is not based on the direction of a teacher or a set curriculum. It is self-directed learning.
Unschoolers take a hands-on, community-based, real-world approach to education--everything and everywhere is a learning possibility. Unschoolers may use an open source textbook like those found at CK-12 Flexbooks, take classes online through a program like Carnegie Mellon’s Open Learning, or continue on to in-person coursework at a local college.

Unschooling lets the child decide what, when, where, how, and why they should learn. It treats education in a holistic manner where knowledge is naturally interconnected, not compartmentalized into subjects or separate classes. Parents of unschoolers recognize that learning is not always sequential or linear. This means that unschoolers may learn algebra from watching educational videos from Khan Academy at an earlier age than in a traditional school. They might learn multiplication before mastering subtraction. They could create their own interactive story, game, animation, or simulation with Scratch, a MIT programming language, or create their own 3D learning cube or collection of video, audio, images, or text using Museum Box.

Unschoolers are creating their own digital content, sharing it, and, in essence, taking an active part in the open source movement. They are creating communities based on sharing and providing resources open to everyone. It’s a way to learn at little to no cost. Parents and children are blogging or creating their own websites, and can join online or offline groups that share news, activities, and information. They’re organizing field trips, community gatherings, apprenticeships, internships, and even science or math projects. Critics of unschooling claim that children do not get the resources they need to build a knowledge-base or that unschoolers lack the social interaction they need to deal with the world at-large. These arguments fall flat with the increasingly global digital world, the amount of networking, and the open source resources being freely created and made widely available and accessible.

Unschooling is gaining momentum, attention, and acceptance in the United States. It is uncertain how many of the nation’s children are unschooled because they statistically fall under the category of homeschooling. The U.S. estimated that 1.5 million students were homeschooled–that’s 2.9% (of all students in the U.S.) for 2007[1]. This figure has increased 36% since the last study in 2003[1]. Each state has its own laws concerning homeschooling or unschooling and local school districts may set their own policies on home education. As a result, it is difficult to get a true sense of how many unschoolers exist. Some believe the unschool population represents 10% or more of homeschoolers. Local, state, and regional unschool networks abound in the United States. There are unschoolers from all population groups, walks of life, belief systems, and educational levels: African American, Chinese, Hispanic, Christian, Jewish, Muslim, special needs, gifted or accelerated learners, or from rich or poor families. Single parents and stay-at-home fathers unschool, as well as parents who work part-time or full-time.

As with the open source movement, unschooling is not exclusive to the United States and is becoming a global phenomenon. Unschoolers can be found in India, Israel, Canada, parts of Europe, Britain, Australia, New Zealand, South Africa, and Malaysia. In fact Sugata Mitra has shown that children from the slums in New Delhi, with little to no education or knowledge of English, can teach themselves and each other if they are motivated by curiosity and interest.

Yet, in many countries, unschooling or homeschooling is illegal or there are stiff restrictions. Some German or Swedish parents have faced imprisonment, heavy fines, loss of child custody, or forced asylum for homeschooling. As a result, homeschooling has become a global human rights issue as countries continue to ban it or impose sanctions on it.

It will be interesting to watch how the unschooling movement and open source unfold. Unschooling and open source challenge our definitions of resourcefulness, self-education, self-direction, and self-motivation. It goes against the concept of keeping knowledge in the hands of the few and the powerful. Seeing children bubble with a love of learning is infectious, but seeing them burst with open source is bliss--and hope for the future.