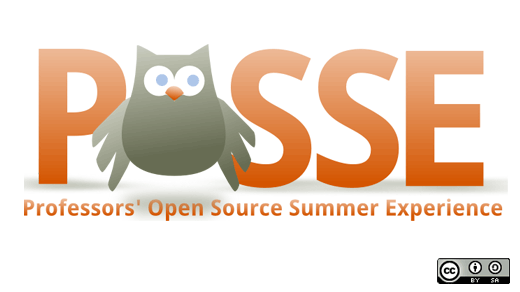 POSSE (Professors Open Source Summer Experience) is a week long introduction to the FOSS community and its tools, development and instruction that has been offered and sponsored by Red Hat since 2009. Over 70 participants (mostly faculty, but with a few staff and grad students at some iterations) have attended sessions in the U.S., Qatar, South Africa and Singapore.

The idea behind POSSE is to introduce traditional computing faculty and other interested members of academia to the open source way in order to grow the number of faculty teaching, and students contributing, to FOSS. While the bulk of participants have been computing faculty, there have been professors of electrical engineering, math, english, journalism and other disciplines who've attended the workshops. The curriculum was developed by the Teaching Open Source Community (TOS) and faculty came from both the TOS ranks and from Red Hat staff.

The general workshop flow is that the first two days are a mix of lecture and hands-on work that get the attendees familiar with the tools (blogs, wikis, git, repositories, bug trackers, etc) processes and communities of open source. The second two days focused more on actual development within community projects and the last day, a half day, focused specifically on methods for bringing FOSS to the classroom. That said, every POSSE session is different depending on the instructors and the students. A POSSE is generally led by one experienced computer prof and one FOSS community person. POSSE workshop leaders move up through the ranks from the attendee pool.

This year POSSE hit the five year mark, so it was decided that one POSSE session would run at RIT in June. After that, the time would be ripe to do some surveying of POSSE alumni, collect some metrics and assess the program to see what, if anything, needs to be tweaked or revamped.

This was the third time RIT had hosted a POSSE. This year it was taught by Remy Decausemaker and Dave Shein. Red Hat staffer and code ninja Ralph Bean stopped in for a masterly session on the uses of Git Hub as well. The leaders changed things up a little due to a bit of FOSS community synchronicity. Historically POSSE leaders involve students in FOSS community projects they are active in for the “deep dive” sessions—where folks get hands on development community experience. This time, however, Dave and Remy handed the reins over to a colleague from the University of Rochester.

The University of Rochester is the development and community lead for a FOSS web-based homework/study/drilling platform called WeBWorK. WeBWorK is used by 240 colleges and universities around the world and is supported by the Math Association of America and the National Science Foundation. It currently comes with a National Problem Library (NPL) of over 20,000 homework problems.

Professor Michael Gage, one of the WeBWorK community and developer leads, attended POSSE at RIT last year and decided to hold a dev camp for his community in Rochester in June, overlapping the RIT POSSE. So together the POSSE leaders and Gage decide to select WeBWorK as the deep dive project. Gage and one of his other dev leads, Professor Jason Aubrey from the University of Missouri, attended the first two days of RIT POSSE this year for two reasons. The first was to broaden and deepen their own understanding of FOSS processes and communities. While WeBWorK has been running for ten years, it has done so as an isolated effort, and their leaders are now looking to engage with, and function more like, the mainstream of the FOSS dev world.

The second goal was to introduce their platform to our profs for the deep dive. The two teams worked at their own workshop sites, even though they were only three miles away, and communicated via IRC during Wednesday's development session. They then met together socially Thursday night for dinner.

The joint effort was a mixed success (the development session, not the dinner) primarily due to challenges some attendees faced getting WeBWorK running locally; despite the fact that Michael and Jason had provided RAM sticks with WeBWorK on them for POSSE attendees. In hindsight, more time should have been put in up-front to ensure that the WeBWorK installs were solid enough for system newbies to engage with. And some time on Tuesday should have been designated for install so that there would have been a full day on Wednesday for development. In some ways, though as one student commented:

...even though the setting up of the environment for WebWorks was somewhat painful, that was an excellent experience as it truly reflected what may go on in an open source project.

Despite the occasional glitch, the attendees reported a successful experience in their exit surveys. The majority asserted that they planned to continue with FOSS participation and begin designing FOSS instruction for their students. Two expressed interest in becoming POSSE instructors one day and a third was interested in offering guest lectures in their field.

A POSSE alumin survey will soon be distributed to past participants. The goal of the survey is determine how they were able to move forward with teaching FOSS practices and processes and getting themselves and their students engaged in FOSS contribution. It is our hope to have the data collected by the end of August and have the data shared with Red Hat and TOS sometime in mid or late September to help us evaluate POSSE's design and its success. Stay tuned for further developments.

Stephen Jacobs - Stephen is the Director of the Lab for Technological Literacy at RIT. He has an MA in Media Studies, from the New School for Social Research. He teaches primarily graduate and undergraduate courses in Computer Game Development and On-Line Community as a member of the School of Interactive Games and Media. His strong communications background is combined with consulting and publication interests in the...
More about me