We are excited to announce the second round of the Open Humanities Awards, running from April 30 until June 6, 2014.  There are €20,000 worth of prizes on offer in two dedicated tracks:

Whether you're interested in patterns of allusion in Aristotle, networks of correspondence in the Jewish Enlightenment, or digitising public domain editions of Dante—we'd love to hear about the kinds of open projects that could support your interest!

Why are we running these Awards?

We want to make the most of this new opportunity by encouraging budding developers and humanities researchers to collaborate and start new projects that use this open content and data paving the way for a vibrant cultural and research commons to emerge.

In addition, the DM2E project has developed tools to support Digital Humanities research, such as Pundit (a semantic web annotation tool), and delivered several interesting datasets from various content providers around Europe. The project is now inviting all researchers to submit a project building on this DM2E research in a special DM2E track.

The Awards are open to any citizen of the EU.

Who is judging the Awards?

The Awards will be judged by a stellar cast of leading Digital Humanists:

What do we want to see? 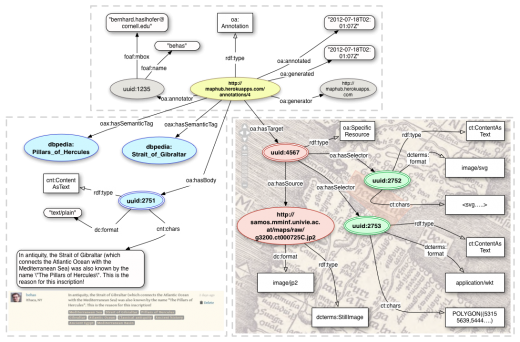 Maphub, an open source Web application for annotating digitized historical maps, was one of the winners of the first round of the Open Humanities awards

For the Open track, we are challenging humanities researchers, designers, and developers to create innovative projects open content, open data, or open source to further teaching or research in the humanities. For example you might want to:

You could start a project from scratch or build on an existing project. For inspiration you can have a look at the final results of our first round winners: Joined Up Early Modern Democracy and Maphub, or check out the open-source tools the Open Knowledge Foundation has developed for use with cultural resources.

As long as your project involves open content, open data or open source tools and makes a contribution to humanities research, the choice is yours!

For the DM2E track, we invite you to submit a project building on the DM2E research: information, code, and documentation on the DM2E tools is available through our DM2E wiki, the data is at http://data.dm2e.eu. Examples include:

Who is behind the awards?

The Awards are being coordinated by the Open Knowledge Foundation and are part of the DM2E project. They are also supported by the Digital Humanities Quarterly.

Applications are open from today (April 30, 2014). Go to openhumanitiesawards.org to apply. The application deadline is May 30, 2014, so get going and good luck!

For more information on the Awards including the rules and ideas for open datasets and tools to use visit openhumanitiesawards.org.

Open Knowledge - Open Knowledge is a worldwide non-profit network of people passionate about openness, using advocacy, technology and training to unlock information and enable people to work with it to create and share knowledge. Follow Open Knowledge on Twitter @OKFN
More about me