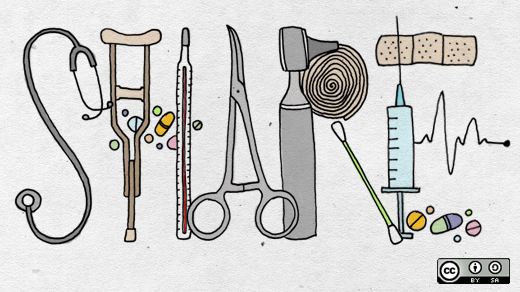 The concept is simple; invite geeks of varying backgrounds to a central location for a weekend, supply them with food, drink, and an interesting problem, and see what happens. Kind of like the 40 Hour Famine, but with more eating, and labour donations instead of money.

ThoughtWorks, an agile developement and design company, hosted and sponsored (among other sponsors, like Red Hat) the second annual Health Hack in Melbourne, bringing researchers together with technologists at their office in Melbourne’s central business district for 48 hours to create software that solved a problem in the health sciences. All the code developed at Health Hack would be released under an open source license, and in most cases, took advantage of some form of open data.

I walked from Red Hat’s office to Thoughtworks’ office in the late afternoon, excited about being part of Health Hack, even as an observer. Arriving before everyone else, I was able to meet and talk with Dr. Maia Sauren, the charismatic and efficient event organiser. I watched as her loyal army of volunteers turned a messy open plan office into a… slightly less messy open plan office. It wasn’t long before the participants started to arrive—and the provisions. 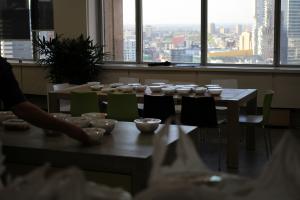 As a million dumplings and an impressive quantity and variety of alcohol were arrayed for consumption, a diverse group of individuals began filtering in from the elevator. Some clearly knew each other, but most didn’t. I asked why they wanted to participate, and they said things like "networking and getting involved in the hack and medical communities" and "to do something helpful" and "I'm a current user experience design student at General Assembly and was wondering how it could be applied to a hack problem."

Before meeting and eating, participants categorized themselves using coloured stickers on their nametags identifying their skill sets. Gold for developers, green for data specialists, blue for maps, and red for designers. 100,000 dumplings and conversations later, and it was time to get down to business.

The problems Health Hackers would be working on had been posted in advance, so many people came prepared with ideas about how and where they could contribute. Each problem-owner was given three minutes to present their problem and another three minutes for questions; all but two presentations went over the alloted time because the problem-owners had so much to say. It was obvious that these problems had been keeping their owners up at night: solving them would directly impact each researcher’s ability to make the world a better place.

I made predictions about the five problems that would attract the most attention, and got three right. One of the problems I thought people would want to work on was superbug analytics, and it didn’t have a problem owner to advocate for it. It showed how important pitching skills are for a problem and just how hard it is to communicate a complex idea in 180 seconds.

After the presentations, clusters formed around problem-owners seeking more information. The biggest groups had formed around the epilepsy research, the data pipeline, and the research funding landscape. By 9pm, six teams had been formed, with at least two hacking right then and there.

All of the problem-owners who had attracted a team seemed ecstatic to have attracted an army of volunteers who would, for the next 48 hours at least, care as much about their problem as they did. Ben Fulcher, co-owner of the addiction research problem, initially felt "relief and validation that our problem attracted so much interest from so many bright and motivated people," and was excited by the prospect of having "a working prototype for an app that can start to be deployed to collect data, as the first steps towards a revolution in monitoring and psychological assessment." 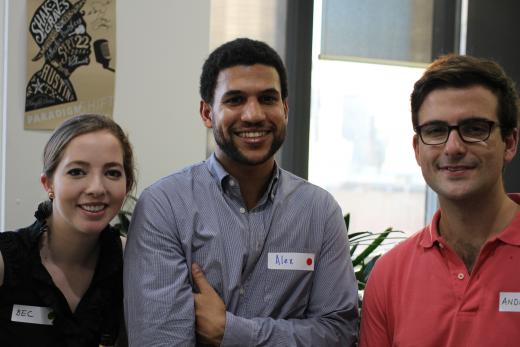 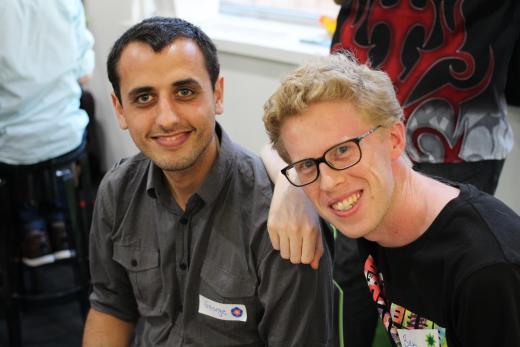 Twenty one hours later and solutions were starting to crystallize. Scopes had been changed: the funding landscape visualisation team VizMyGrant had realized they needed to create pictures that told a single, specific software as the basis of an app that will be expanded in the future. The mutation instability filter team had already solved most of the original problem and wanted to go further. The pipeline team had started to realize that their solution might be to reduce the possible future solutions by ruling a number of them out. 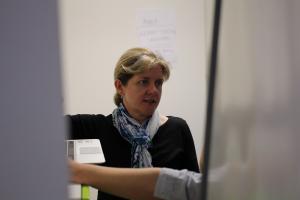 When the participants gathered on Saturday afternoon to discuss their progress and process, it was incredible to see how, given a problem and a deadline, a group of individuals became a community of contributors. Bec Martin, from the addiction app team, put it this way: "When I rocked up, I had my good friend Andreas with me, and we expected to be a team of just two. The problem we wanted to solve had also piqued the interest of a group of other people and so on the first day, when we got to meet the problem owners, we met all of these other interested people and decided to form a team... Because we had this amazing team we were able to bash out two functional apps."

Equally incredible was the speed at which participants understood and became invested in the problems. Kate Birch, co-owner of the epilepsy problem was pleasantly surprised "that the complexities of the clinical problem and rough dataset could be understood so quickly by those with no previous exposure to clinical research." Likely that understanding came from a combination of really clever people and the application of software development practice to research problems.

As the sun began to sink on that Sunday afternoon, the teams gathered with a quiet excitement. Each team presented their results and talked about how they achieved them. The judges went off to deliberate, and soon there would be winners and prizes, but participants were already proud of what they’d accomplished and happy that they’d done it with a group of people that used to be strangers. 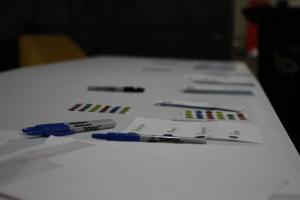 Before the Melbourne winners could be announced, we got an update from Sydney, which included the obligatory anti-Sydney smack talk. I’m a Brisbane guy, so either I don’t get it, or I felt left out and disappointed that no one cared enough about my city to call it out. The Sydney event had drawn an equally passionate, if smaller crowd, and come up with some really interesting health hacks, which is some consolation for living in a hole.

Back in Melbourne, an honourable mention was given to the This is not a pipe team, who had selected the least glamorous problem of making command line interface more usable. Pip Griffin, problem co-owner was "very pleased that our problem—which was challenging, and not the most exciting-looking one of the bunch—attracted a small team of really dedicated, persistent people who were prepared to put [in] a lot of time and effort."

Third place, also known as The Spirit of Health Hack, went to the mutation instability filter team. They’d started out with a well-defined problem, and using Ruby On Rails, delivered a complete solution that gave some of the researchers present goosebumps. For their efforts, they received a year of paid GitHub access and behinds the scenes access tour of Murdoch Childrens Research Institute (MCRI).

Second place went to Girror (a portmanteau of gambling and mirror), the addiction monitoring app. They managed to produce working Android and IOS apps, and the problem-owners felt confident that they could secure funding to take the app the rest of the way.

First place was granted to VisMyGrant, a visualisation app that rendered complicated funding data into consumable pictures to help advocates advance policy discussions and give PhD students a better idea of what they are getting themselves into. They received 10,000 compute hours on Trefid, Australia’s premier supercomputer.

There are challenges to openness in the health sciences. Ben noted that "because you’re often working in a space where your ideas have clinical and commercial viability, there is a tendency for researchers and universities to protect their ideas."

Maggie Evans-Galea, the VizMyGraph problem-owner, went further. "A significant challenge to 'openness' in the health sciences is the hyper-competitive nature of the scientific research 'system'. Investigators are constantly vying for the next grant or publication…  people tend to keep their best ideas and results to themselves. There is also the aspect of 'contribution' … It is important for one's track record ... to be recognised as [a primary contributor]."

At Health Hack 2014, eyes were opened to the power of open source, open data, and cross-disciplinary collaboration. Non-scientists got a taste of the struggles of people who had dedicated themselves to addressing a specific human need in the health sciences. 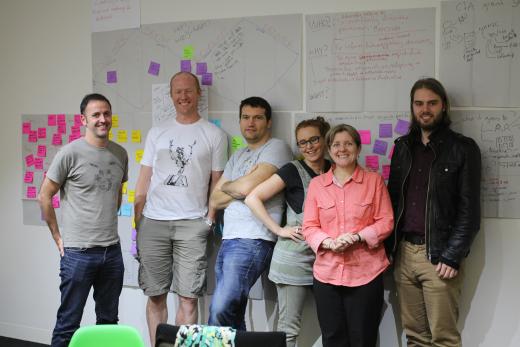 Maggie seemed confident that "if we could level the field and reduce the burden on researchers to constantly 'perform and produce' at an elite level, we would likely see greater sharing of knowledge and data." Ben seemed optimistic about the potential for a more open future in health, saying that "Health Hack demonstrates how much can be achieved when the spirit of openness is embraced and people work together to deliver an outcome." Kate Birch agreed: "Medicine is a slow beast to evolve... clinical research follows this trend... as more successful research is conducted using open techniques... then more science will start to utilise these techniques."

What to read next
Tags
Health
Tim Hildred 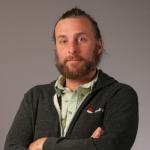