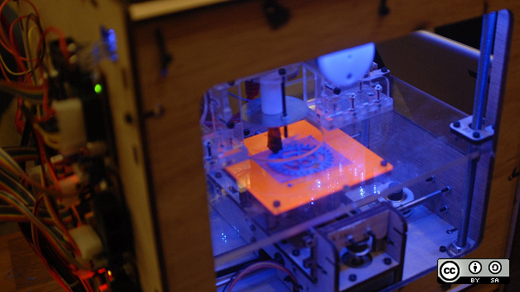 And at the center of the novel—the object of so much conflict and controversy—is the 3-D printer, a technology relatively obscure at the time of Doctorow's writing. Last week, NPR reported that 3-D printing is coming into its own. As Jon Kalish weaves a narrative about the potential for "digital fabrication machines" to democratize production, disrupt the traditional factory model, and create goods on smaller scales, he doesn't speak long before invoking open source.

Digital fabrication involves manufacturing, or "printing," three-dimensional objects from a variety of materials, including wood, metal, and plastic. So-called 3-D printers can read designs stored in digital files and translate them into solid matter on the spot.

For example, Kalish reports that a New Yorker needed to replace a broken piece of his Bugaboo baby stroller, a component that would have cost $250 if purchased from the manufacturer. But the part could instead be fabricated from a custom 3-D model—and forged from a stronger material, stainless steel—for $25. The plans for that design are now shared online, available at no cost to other Bugaboo owners who want to use them.

The story also features interviews with participants in the SketchChair Project, a collaborative effort to produce open source software for designing digitally fabricated furniture. The software can output files readable by 3-D printers and laser cutters.

One member of SketchChair, Tiago Rorke, says the project isn't "so much interested in trying to create a brand of furniture," but rather "more interested in taking the model of open source software development and apply that to product design":

You know, it's not just the SketchChair software which will be available for free but the designs themselves ... And so, it takes it away from being about the original sole authorship but more about people working collaboratively through a community and I guess sharing their ideas is a big part of it.