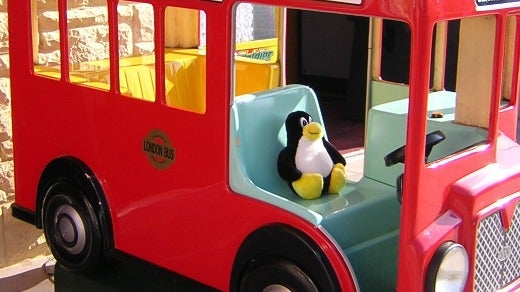 On Saturday, April 13, 2013, a free "mini maker faire" event will be taking place at the Cleveland Public Library, in downtown Cleveland, Ohio. Modeled on the legendary Maker Faire of San Mateo, California, the mini maker faire will be a celebration of ingenuity and the do-it-yourself (DIY) spirit.

I'll be one of the workshop presenters at this event and I'm expecting a large number of penguins will be attending. Note: "Penguins" are an affectionate name for open source enthusiasts—so named in honor of the Linux mascot, Tux.

Maker movement events like this one are a magnet for penguins because open source hardware and software are so integral a part of the maker movement. From Raspberry Pi's to Arduino microcontrollers to Inkscape-designed cutting patterns—open source shows up in some way or other at almost every booth at a maker event.

What makes this event particularly exciting is that the Cleveland Public Library has made a deep, long-term commitment to supporting the maker movement at the public library—with a 7,000 square foot maker space: TechCentral. Read more about it in MAKE magazine. Some of the computers at TechCentral run Ubuntu systems with OpenShot, Audacity, Inkscape, and GIMP installed on them.

I'll be teaching a workshop at the event on how to create your own Blu-Ray DVD disks. I'm deeply interested in the intersection between technology and human dignity. A question I've been asking myself is: "How do people's self-perception change when they see how easy it is to create high resolution representations of their own ideas and point of view?" I've created this thinking out loud YouTube video with some related wonderings, too.

I was hoping to incorporate more open source into my workshop, but the Linux burning application I like to use, K3b, can burn Blu-Ray video to Blu-Ray disks, but not to DVD disks. I don't own a Blu-Ray burner, so I've not been able to try out the features of this software yet. Perhaps some programmer will be able to figure out how to hack K3b so that it can burn Blu-Ray video to DVD disks—in the same way that Roxio Toast 11 can do so on Macs.

If you're a penguin and plan to attend my workshop, bring along your laptop with OpenShot video editor installed. I'm happy to give you some time and space for an OpenShot demonstration; it's an excellent video editing program that rounds out an open source media production suite and is able to export video to Blu-Ray format.

Want to explore some uncharted terrain? Create some Blu-Ray video storytelling using Inkscape graphics. To whet your appetite, see these three YouTube videos I recently made:

Open source enthusiast St. Francis of Assisi said it best when he said:

Start by doing what is necessary, then what is possible, and suddenly you are doing the impossible.

At the Cleveland Mini Maker Faire, lots of people will be sharing what's possible. What's impossible is just a short grab away from what is possible. In this situation, we encourage you to stick your arm out, because is there anything more thrilling than grabbing ahold of the impossible and dragging it into the circle of the possible? In the open source community, we do this as a matter of course.