Nick describes it as a sort of cross between Kickstarter and Humble Bundle, and like Humble Indie Bundle, the income is split between the developers themselves and charities (including Creative Commons). But there was one big twist: if the bundle reached its goal of $10,000 by July 15, all assets would become public domain under the CC0 public domain declaration.

Well, it did—raising $12,088 from 744 backers. That means you can now download all the packages in this bundle.

This is actually the third bundle Nick has put out under the brand Commonly. It’s the most ambitious bundle to date, but it’s really just the beginning. What Nick’s really interested in isn’t just about videogames; it’s about changing how people think about the public domain. I met up with him a few days ago to chat about videogames, public domain, and the open source movement.

We also talked about the increasing rift in the videogame world between the indie developers like himself and the high-budget, "Triple A" games of the big-name studios. There’s been a lot of talk recently about the videogame industry’s occasional tone-deafness to issues like race and gender. Nick told me that he sees a parallel conflict over issues like intellectual property and digital rights management (DRM). While many young developers like Nick share his opinions, some big-name developers are sticking to what he sees as a more old-fashioned view.

"The triple-A industry has to reach out to as massive an audience as possible," Nick said. "They close things off because they can’t afford the risk. You notice that indie games tend to be for a more open ecosystem. With the Humble Indie Bundle, 'DRM-free' is a part of their tag line. Indie games go with the more open ecosystems… while triple-A’s create their own walled gardens with game consoles." And, he was quick to add, "The iPhone counts as a [closed] console."

Nick recently moved to the San Francisco Bay Area—he’ll be here for the next two years as a part of the Thiel Fellowship. "You have to have a big vision [for the fellowship]," he told me, "and my big vision was a thriving public domain."

He originally applied for the fellowship with his project Craftyy, an open source game-development platform and social network. Although the Thiel judges liked Nick’s ideas, "It wasn’t clear to them how Craftyy would lead to a thriving public domain." That was when Nick started to shift to the idea of crowdfunding for public domain creative works. He told me that his plan for the next two years is to expand the Commonly concept beyond the world of videogame developers into the broader creative community. I can’t wait to see where Commonly goes next and what awesome stuff it brings into the public domain with it.

What to read next
Tags
Licensing
Gaming
Elliot Harmon 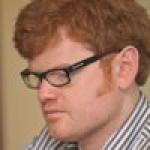 Elliot is a Communications Manager at Creative Commons and manages their various communications and social media channels. He’s worked in the non-profit sector for eight years, mostly in the arts and technology. He has a degree in English and theater from the University of South Dakota and a Master’s in writing from the California College of the Arts.
More about me