Afraid someone will steal your idea?

I'm a board game designer. It's a fun, creative, scary job and worlds away from my former career in corporate advertising. In both fields, there is a high value placed on ideas, especially "new" ideas. No one wants to get scooped. Be it an ad campaign or a board game, you want to be the first out the door with it.

So it may seem odd that I've spent ten years blogging my game design process. Every one of my harebrained concepts and fully-formed prototypes go up live, viewable by everyone.

The question I get most often is: "Aren't you afraid someone will steal your idea?"

To those who ask, the real thing I hear you saying is: "I'd be afraid of someone stealing my idea."

I get it! You're really proud of your new game mechanic or your original theme or some other thing about your precious IP that is gonna be worth bajillions. Pride in your work is good! It keeps you going in the dark times when you wonder whether you'd be better off with some other hobby, like tortilla golf.

But that pride can also give you some weird expectations, like that anyone else cares nearly as much about your idea as you do. That's not meant as an insult against your idea, it's just a necessity of the creative field. If anyone cares as much about your game idea as you do, they'd already be spending the late nights and long hours it takes to playtest, develop, cry, revise, cry, and playtest again until the idea is a proper game.

Here are a few things I've learned from years of designing games in public. I hope some of these observations are relevant in your own creative field.

The truth about ideas

Seriously, a cool idea isn't a game in and of itself. Antoine Bauza was recently awarded the Game of the Year award at the Essen game festival in Germany. He won it for the tiny cooperative card game Hanabit, in which players hold their cards backwards and rely on each other to get accurate information about their own hands. Now, he didn't just roll up and say, "Hey, I want to make a game where you hold your cards backwards and have to work together!" and get the Spiel de Jahres handed to him. No, there was a ton of work and two separate publications before Hanabi got recognized for its brilliance and became a commercial hit.

Even if your idea is 100% original, the idea alone isn't valuable, it's the work of revealing emergent properties that makes the idea valuable. Taking Bauza's Hanabi example again: For a game that elegant, you know there was a lot of time put into every design decision. With so few mechanics, everything becomes that much more important. How many suits should be in the deck? How many cards of each rank should be in the deck? What's an average score across one hundred games? How do people communicate with each other in play? None of these questions get answered unless the "idea" becomes a reality at the table. There are uncountable emergent properties that just don't reveal themselves until you playtest.

Your ideas are stolen... from someone else.

I've got a closet full of unfinished ideas that never made the final cut for whatever reason. Ideas everywhere! Seriously, here, have some, I have too many. We've all got them, and chances are that not one of them is at all original. Not mine, probably not yours. We can't escape the design milieu of our times, we can only respond to it, iterate it. We are adrift on the flow of style, whether we realize it or not. A simple example: Try thinking of a new chess piece. Go ahead, maybe it moves like a bishop, but limited to two spaces? Maybe it moves like a King, but two spaces if it moves forward, and can only capture diagonally? Okay, now take a look at the hundreds of chess pieces out there and see if you can find some empty space left to explore. Is this sobering? Yes. Is it discouraging? Hell no.

Your idea alone is not a game.

Let's get zen for a bit. If a game goes unplayed, is it still a game? Is it only a game while being played? These are the questions I have for you if you're more concerned about jealously guarding your precioussss instead of actually putting it in front of as many people as possible. Your idea is not a game. Only your game is a game. Even then, it's only a game if people are playing it. That means you have to actually make prototypes, write rules, and face the social awkwardness of asking strangers to play this thing with the added caveat that it may not even be fun. That is what will make your idea valuable. And guess what? When the game is fun, the victory will be so much sweeter.

Value takes a while. A long while.

All that to say... No, I'm not worried about someone stealing my ideas. Exactly the opposite, in fact. I wouldn't be here if I wasn't so open and public about my design process. I've been doing this in public for over a decade now. But when I started? Yeah, I was worried about it.

It started in 1999ish when I designed a fan-made World of Darkness RPG about sentient zombies, called Zombie: the Coil. There was a gap in the WoD mythos that I thought I could fill. And boy, did I fill it with every contrived faction, inconsistent mechanic, punk-rock posturing, and gothic whininess that I thought a proper RPG was supposed to have. I just copied the structures from existing White Wolf properties of the time and wrote within those constraints and posted the results on my crap website.

Then I got worried about White Wolf stealing my idea. I heard they were releasing Hunter: the Reckoning and that it featured zombies. Oh no, zombies in the World of Darkness? Crap! All my writing was for naught! Nevermind that I didn't even try properly pitching it to White Wolf in the first place. Can you imagine the naive audacity? I crib wholesale from White Wolf's books and then I get worried about them looking at my stuff? Get it together, teen Daniel. Zombie: the Coil sucks. But, keep at it, you'll find your design mode in about 15 years. (Also, teen Daniel, stop wearing a trench coat in Florida. You look like an idiot.) Needless to say, White Wolf did just fine for itself in the 90s without my tiny contribution. But working through that fear, just getting comfortable showing my work to other people and holding it up for critique: that was valuable. And, then I went on to design plenty more rubbish games.

No genius. No mystique. Only work.

Don't buy into the genius mystique. It is a mirage. Maybe there are geniuses out there, but you can't go assuming that you're one. That's like living as if you're going to win the lottery on a regular basis. No, the value comes from the work and no one's going to do more of it than you. Buy a pizza for your playtesters. Agonize over game terms. Completely scrap three prototypes in a row and start over again. That is the craft, the work, of game design. So get back to it!

What to read next
Tags
Art and design
Gaming
Daniel Solis 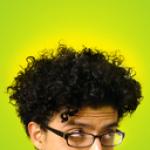 Art director by day. Game designer by night.http://www.danielsolis.com
More about me