What open source means to a young programmer

I’m a 15 year old programmer. I started at nine and by now have written a lot of code. To me, programming is creating, and I've created many projects—from a pure Java 3D projection engine to a web spider. Today, I'm sharing my story with you for Opensource.com's Youth in Open Source Week.

In the sometimes dark and mysterious world of computers, I see open source programming and community around it as a force of good. Open source sparks and kindles a connection between people that I think is hard to find elsewhere in programming. Working with open source, a programmer builds important and powerful collaboration skills. This is significant because many of us (programmers and self-proclaimed nerds) are rather antisocial. Open source programming helps us cultivate social behaviors like sharing, improved communication, and collaborating towards a common goal.

It was just a few years ago that I first heard the term "open source"—from my dad. I was new to programming then and though I understood the concept behind open source, I didn't understand why. Why would someone take their hard work, their masterpiece, and allow someone else to “scribble” on it? To me, it seemed equivalent to an artist inviting people to draw on their painting.

A year later, a friend of mine and I decided to create a platformer game. It was pretty basic, but we had a storyline. I did all of the code, and as I was creating this game, I realised that, like I said before, programming is creating, but more importantly: I have the ability to create something with soul in it. I had passed a certain kind of barrier and things that were difficult in coding had become easier. Now, I felt, I could create be more artistic with my code. I could start to use code as a form of self-expression.

As I coded, the why? of open source began to seem a little less ridiculous. I began to understand the appeal of distributing work that could help others. I found that programming is an art—but less like a painting and more like a novel. The majority of great novels have had a great editor. Even simple texts have an editor behind them, helping to shape and add and improve the content.

As a rather introverted person, being an open source programmer gives me access to a community that it feels really good to be a part of. My first polished and complete open source program is a simple vulnerability scanner. And though I have very few downloads and I’ve been the only one who’s contributed to the project on GitHub, doesn't mean I won't ever have a successful open source project. For now, my projects are small, but I hope that some time in the future my projects will help people across the globe.

For many of us, programming is about creating. In a sense, it's like dreaming. Coding is a way to make your dreams come to life. And, the world of open source programming, to me, is one of dreams, always changing, always moving, sometimes bizarre, with infinite opportunities.

What to read next
Tags
Education
Dylan Katz 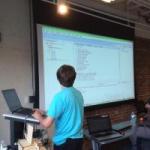