Creative Commons enables the return of the game Glitch

If you never had a chance to play the delightful Flash-based MMO game Glitch—soon to be rescued from the pit of dead games thanks to Creative Commons assets—I'll let its new tenders explain:

Once upon a time...11 giants accidentally created a beautiful little world. This world was equal parts beautiful, silly, strange and sometimes even sad. It was filled with tiny little creatures called Glitchen, who looked after the giant's creations, milking butterflies, petting piggies and talking to bubble trees, among many other things. But one day the giants awoke from their slumber, and the world seemed to disappear. But did it really? We think not. Project Eleven is plumbing the depths of the Giant's memories, trying to find a tiny glimmer of the world that once was, and set those little Glitchen back on their paths.

Glitch launched to the public in late 2011 after about two years of private play, but its parent company Tiny Speck quickly backpeddled the game into a long-term beta status until it was finally shut down altogether in December 2012, leaving sad Glitchens everywhere (it was played by more than 150,000 people) hoping that someone, somewhere might someday rescue the game and help the worlds and their little inhabitants live again.

Late last year, that dream came closer to possibility when all of the game's beautiful art and a portion of its source code were released under a CC0 license, the Creative Commons version of putting it all in the public domain.

Enter Project Eleven, a group of former players who took on the task of bringing it back. The key is that not all of the code was released. Project Eleven notes that they assume what's missing is what became #Slack, the new project of the former Tiny Speck team. They are, however collaborating with the old team using that new product, and hope to improve on the old version of Glitch by reducing dependence of Flash and writing new code using node.js.

When it was still playable, I used Glitch in talks as a way of describing the concepts of community and collaboration in gaming as representative of those concepts in open source communities. You could certainly play the game alone, but you would never be able to get as far as you could if you worked with other players, much like developing open source software.

Recently on their Facebook page, Eleven posted a new glimpse of the game with some faces from the old: 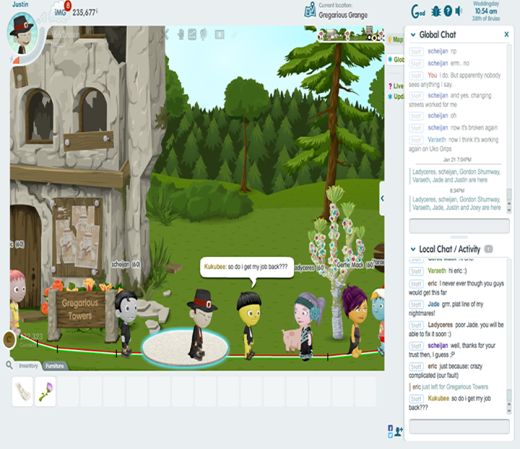 And that's all it takes for any old Glitchen to be ready to start bubble harvesting and smelting all over again.

What to read next
Tags
Licensing
Gaming
Ruth Suehle