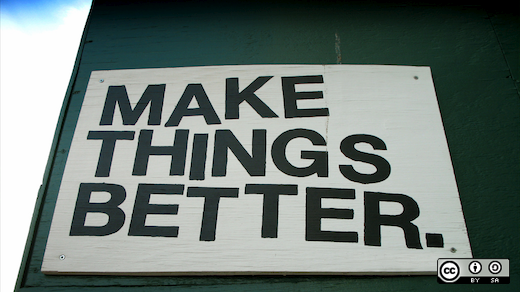 Kevin O'Brien likes to talk. Luckily for computer users everywhere, he likes to talk about free and open source software.

O'Brien is tech track lead for Penguicon and former publicity director for Ohio LinuxFest, but he's perhaps best known for his fortnightly podcasts on community-run podcast network Hacker Public Radio (where he goes by handle "Ahuka"). Here, O'Brien talks. He talks about free software. He talks about software licensing. He talks about hacker conferences.

And, he talks about using open source tools to enhance our lives.

An advocate for software freedom for more than a decade, O'Brien has written and recorded dozens of tutorial podcasts for people wanting to learn how they can make use of open source software. His long-running series on LibreOffice is quickly approaching a 40-episode milestone. Another series on privacy and security, which helps everyday computers users take advantage of encryption technologies, runs concurrently (one recent episode features O'Brien at a conference giving—what else?—a talk). Learning new software can make casual users feel lost in a sea of new procedures, techniques, icons, and settings. O'Brien's voice is the lighthouse that keeps them firmly and confidently on course.

Ahuka took a short break from writing at one of his three websites and recording his tutorials to do a bit more of what he does best—talk, with us.

When did you first begin recording your tutorials? What motivated you?

I think it goes back to when I was a teacher. I always wanted to help people learn things, and I flatter myself that I have some talent for it.

I created a set of tutorials for MS-DOS back in the 1990s, which may have been my first free offerings, and even today they still seem to help a lot people. Then I got involved with a training site called "Smartplanet." The site has completely changed its focus now, but back then it offered courses in different technology topics, and I created a set of tutorials on HTML. When I joined a Linux Users Group in my town, I created presentations, all of which I placed on SlideShare with Creative Commons licenses. I listened to Hacker Public Radio initially, but was encouraged to contribute, and I picked LibrreOffice because my previous background had given me a lot insight into how these kinds of programs work.

You see, when I was a professor at Concordia University, I was made the Faculty Development Officer, and specifically asked to train my colleagues in using the technology tools. To do this, I needed to do a deep dive into understanding the technology, and for me a big part is understanding the inherent reason for using any tool. In the case of Office suites (I started with Microsoft Office) I realized that they could do so much more than most people were capable of doing, but only if you approached them the right way. And as I started learning other Office suites, I realized they were fundamentally similar. So when I looked around for a topic that I could contribute to Hacker Public Radio, this seemed like a good choice.

The Security and Privacy series was something I started because I was asked to do it. I started out not really knowing anything about it, but part of what makes you a teacher is that you can learn, digest, and then teach something to others. In the wake of Edward Snowden I felt that I had to do something to contribute to redressing the balance against the overreach of the NSA and GCHQ.

Why choose podcasting as an instructional medium? What does it afford you and your listeners?

Podcasting is wonderful because it is open to pretty much anyone. My only investment specifically for doing these shows was about $90 for a decent microphone. Otherwise, I record on Linux using Audacity, so it is all free software. And Hacker Public Radio does a great service in providing the platform for me to reach people who are interested. I am a big fan of podcasting in general, and listen to quite a few of them on a regular basis. As for my listeners, all they need to do is point their podcatcher at the feed and get the free content delivered to them. I think podcasting really exemplifies the democratic possibilities of the Internet, which I hope we can manage to keep.

How do you select the applications and tools you'll explain in your episodes? And what's next?

For the LibreOffice series the subject matter pretty much defines everything. I started with Writer, spent about a year on that, and then moved on the Calc, which will also take about a year to cover. That leaves four other components (unless the developers surprise me), so I expect to be busy with this for a few more years on my first pass. There are also more advanced topics in LibreOffice that I will probably circle back to, so who knows how long this will be. But the feedback I get from my listeners is that they appreciate the work and want me to keep going, so I expect to be busy with that for a while.

For the Security and Privacy series, I started with GPG and e-mail encryption, but I am researching things like home hardware firewalls, password security, and two-factor authentication. And of course every day brings news in this area. My focus here is on the average home user. I have friends who are security professionals who do things way beyond anything I can cover, but I think there is room for something that explains how to be secure for someone who is just a computer user, checking e-mail and surfing the web, and does not want to become the roadkill of the Internet. I suppose if I ever run out of stuff I want to cover in these two series, I will probably start something else, quite possibly something on KDE, which is my favorite desktop environment.

You end each of your podcasts by asking listeners to support free software. Why are our software choices so imperative today?

I think free software is very important. Marc Andreessen has said that software is eating the world, and while that is somewhat exaggerated, there is just enough truth in that statement to make it vital that we control the software, not the other way around. And when I talk about supporting free software, it is in part a push-back against the idea that this stuff is just a free lunch. And we know there ain't no such thing as a free lunch, right?

Part of the problem revealed by the Heartbleed vulnerability was that everyone relied on this software, but almost no one supported it. I contribute regularly to the Open Document Foundation, of course, but also to other free software projects. I am a member of the Free Software Foundation, a monthly contributor to the Electronic Frontier Foundation, and I contribute to a number of projects, such as the Accessibility Foundation. And in addition to financial support, I hope that my tutorials and podcasting help to make free software accessible to more people.