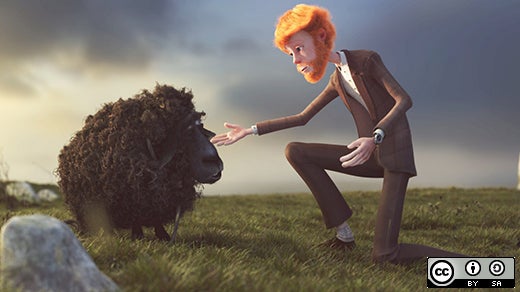 Artists and developers share raw layout animations, art in development, and the files they're using to make the film, and also host weekly Google Hangouts for fans and followers (every Friday at 6 p.m. Amsterdam time) to show their progress. However, to Blender founder and Gooseberry producer Ton Roosendaal—and to the wider filmmaking world—the open production is about a lot more than just sharing the project's developments. So what does being an "open production" mean, exactly? And what does it mean for the wider animation community? Not only is it an opportunity to improve Blender's software and educate animation fans and would-be animators around the world, but it's also a chance to show the movie-making powers that be that there's a fairer, better way to do business.

Gooseberry is the code name for animated pilot short (and planned feature film or series) "Cosmos Laundromat." The story follows a suicidal sheep named Franck, who gets the chance to live many different lives in many different worlds. Along the way, he meets two people who might just be able to save him (and themselves): Victor, a mysterious man with a magic timer, and Tara, an energetic and enigmatic female adventurer. The screenplay is a collaboration between screenwriter Esther Wouda, known to Blender fans as the screenwriter of Sintel, and director Mathieu Auvray, from the Parisian studio Autour de Minuit. The movie was initially planned as a feature film, with 12 different studios from around the world each creating one of the worlds Franck visits to reflect their studio's style and culture. The many-worlds concept was concocted to efficiently incorporate all these different styles into one film. However, as full-length animated films are very expensive to produce, "Cosmos Laundromat" will first be released this summer as a 10-minute pilot short covering Franck's first meeting with Victor and discovery of one of the new worlds.

Ton produced his first (and likely the world's first) open movie in 2006: "Elephants Dream." The idea was to not only show off the capabilities of the Blender open source 3D software, but also to push its capabilities. Each project since has focused on specific software improvements that complement the film being made. This time, the goals include an improved pipeline, a more interactive cloud, better internal rendering, and more realistic hair and cloth systems—so it's no surprise that developers are put in the spotlight in the Gooseberry production process. The other project heroes? The animators and artists.

For most Gooseberry fans, the open production means an open education—at all levels. Beginners and less knowledgeable animation enthusiasts are learning about all the different stages of animation, from storyboarding and modeling to rigging and sculpting to lip syncing, grooming, and editing. Those with some knowledge of and experience in the overall animation process, and Blender in particular, glean even more from the information shared, down to very technical tips and tricks to optimize their own projects and achieve specific effects. In addition to their work on the film, all the artists and developers are expected to contribute regular tips, demos, and how-tos to the blog and the cloud (more on that in a moment) and answer fans and followers' questions about their work, as in the the team of 10+ artists and developers expose their works in progress to the world through blog posts, YouTube videos, and weekly presentations. It can be uncomfortable for the artists especially to expose themselves by posting rough animations and other raw work, which will inevitably be compared with the very polished final images people are used to seeing from large studios like Pixar and DreamWorks; but, by sharing this unfinished content, they're showing everyone watching just how much work goes into each shot—much of it invisible in the final film.

There's no barrier between the actual film makers and the audience, and the makers become the stars of the production and owners of the final result, which is held in trust by the Blender Foundation for the public at large (under a Creative Commons license). This is definitely not how it works in Hollywood, but under the leadership of Ton the team is determined to prove that this is a feasible model for sustainable filmmaking. We want to show the world that a transparent/open production can actually cover its costs while allowing a wider fan base to both participate and learn.

Animation of the caliber the Blender Institute wants to achieve is not a cheap prospect. First of all, all these artists and developers deserve fair compensation for their computer wizardry. Unlike the armies of animators found at the major studios, the Blender Institute can only afford to hire a handful. More animators means more of the movie gets made better and faster. Also, unlike "regular" Blender software development, development that takes place as part of the animation project is done through the Blender Institute, Blender's business arm. That means the project does not receive any of the Blender Foundation's Development Fund and needs to find other ways to support itself.

So, how is the project funded? Aside from a few EU and local subsidies, financial support for the project comes a little via the Blender Store (which offers DVDs of previous open movies, tutorials, books, and some Blender gear), a little through one-off donations, and the rest through crowdfunding via the Blender Cloud. The Cloud supplements the blog with a lot more content: all the films, tutorials, and extras found on the DVDs, plus the script, animatics, rigs, models, textures, and other assets from the current project. All of it is freely licensed for use in other projects, of course. Loyal Cloud subscribers are also offered pilot and feature film credits. An entry-level three-month cloud subscription costs €45, and then €10/month thereafter. Eight or more months of support, or an equivalent donation, earns a credit in the pilot film, and 18 or more months earns a feature film credit. Improving the Cloud's offering and capabilities has been one of the major focuses for the software side of the project. During the making of Sintel, Blender collaborated with supporters in a massively successful "modeling sprint" that produced a wealth of assets to use in the film. The goal is to, like all the other open aspects of this production, take that concept a step further.

As Blender moves toward what will hopefully become its first feature-length production, Blender Cloud will become more and more collaborative. The goal is to eventually allow subscribers to post to the cloud as well, even submitting their own versions of designs and animations, which might actually end up being used in the film. For now, the pilot production is in progress, focusing first on the opening scene of the film, with any additional funding that comes in going toward more artists to make more of the film. A new trailer will premiere in May, and a version of the pilot should be ready to show at Siggraph, the LA-based computer graphics conference attended by all the big VFX names, in August.

Based on the reception of the pilot here and in the wider animation industry, the support for the project in the community, and feedback from the team, Ton will decide what the next step for Gooseberry is. Will it become a feature film? A series? Will it be sponsored by a big name? Will there be further crowdfunding? And what will the logistics be of coordinating 12 international teams?

Whatever the answers to those questions turn out to be, two things are certain: Blender Cloud will remain and continue to become more and more interactive, and Cosmos Laundromat aside, there will (also) be other projects—perhaps another sequel to an existing series and/or a commercial production based on a famous Dutch character. Stay tuned!

Whatever is next, it's certain the production will be "open" and supported by Blender Cloud!

What to read next
Tags
Art and design
Blender
Elysia Brenner 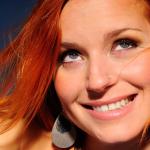 Elysia Brenner is an Amsterdam-based writer and editor who works with technology and tourism/lifestyle clients and publications. She is also the Reporter for the Blender Institute's Project Gooseberry, the code name for the animation studio's sixth production, a pilot short about a depressed sheep who gets a chance to live many lives and meet two people who might just be able to save him.
More about me