How I discovered Linux's true power

My Linux story begins like that of so many others—with an old computer and a desire to tinker.

It was the late 1990s when I read an article about a UNIX-like operating system, "Linux," I could download and install for free. When I was a computer science major in college, my classmates and I regularly used Solaris to learn computing with UNIX. But we never had complete control over that technology. I remember we couldn't explore it the way we would have liked.

This thing called "Linux" promised something different, a kind of openness and flexibility that seemed like the perfect prescription for my ailing laptop at the time. So I took the plunge, installed Slackware, and began using Linux.

That use and familiarity with Linux would prove incredibly valuable when I was treasurer at Delta Air Lines. Beyond my role, I was genuinely interested in how people flew, why they flew, why they made the connections they made, why they chose nonstop flights over other options, and how much they tended to pay for nonstop flights as opposed to others. I decided to review a year's worth of Delta's network data to gain some insight into passenger psychology. (A quick aside: Many people aren't aware that airlines must record data from every 10th ticket they sell—the U.S. Department of Transportation makes this data available to the public as a free download.)

But I encountered a problem: the data set I wanted to analyze was larger than 4GB, and back then Windows computers couldn't handle files of that size. So, I moved all my data to a Linux machine where I could work with it the way I wanted. Linux enabled work that would have been impossible on other platforms. It allowed me to glean insights I would never have been able to otherwise. It helped me provide value to the company (and that saw me promoted to chief operating officer).

Not only did Linux free my data, it also helped me advance my career. 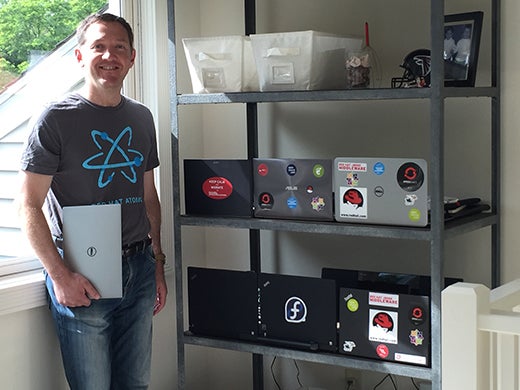 And yet even when I joined Red Hat in 2007, I continued to underestimate Linux's true power. I still considered "software freedom" principally a matter of price; I thought, as others have put it, that the "free" in "free software" meant "free as in beer" (in other words, that the value of free software was its extremely low cost for users). Eight years later, working at Red Hat has radically altered my perspective on multiple ideas (including the most effective way to run a company, as I detail in my new book!), and my views on software freedom are not least among these.

Only after spending time at Red Hat did I begin to truly understand the meaning of "free software"— that software should be "free as in speech," that it should be something we share, something on which we openly collaborate as we make the world a better place. At Red Hat, I quickly realized I was leading a company driven by something other than the profit motive. Like so many people attracted to Linux, I came for the technology, but stayed for the philosophy.

In my years at Red Hat, I've witnessed firsthand the kind of excitement Linux can generate. At an event in Brazil, for example, the Brazilian president wanted to meet with me to express his interest in open source technologies and principles. The same thing happened during a trip to Poland, when the Polish prime minister learned of my visit and asked to meet with me to discuss Linux. Something about the open source movement unites people across all kinds of boundaries, including political and geographic ones.

In the technology world today, Linux has become the platform around which innovative people are building the next generation of computing. People are building the most exciting applications, languages, and frameworks to run on Linux. It's the default platform for burgeoning technological ecosystems around problems like big data, mobile, and analytics. Without Linux, all this activity simply wouldn't exist.

As I sit and write this, I can glance around the room and spot five notebook computers all running different Linux distributions. And the computer I have in front of me is running Fedora 22. They'll all come in handy as I pursue my next Linux-related goal: acquiring my Red Hat Certified Systems Administrator certificate.

I guess you could say I'm still tinkering.