One man's trash is another man's Linux computer

The year was 2003. I was an underpaid accountant-turned-IT-professional, and father to two children under the age of four. The idea of using Linux was intriguing, but it wasn't until I had a chance to experience it while taking a class on Long Island for work that I was fired up enough to try it out.

The deed was done late in the night the Wednesday before Thanksgiving in 2003. Thankfully, it went off almost without a hitch! Since then it has been a steady slip deeper and deeper into the Linux abyss.

My kids had a hand in pushing me over the edge too. Many late nights were spent with a keyboard in my lap and a baby sleeping on my shoulder as I give my wife a much-needed break from nursing the little piranhas. Together we explored Red Hat then Gentoo Linux, and technologies that would otherwise have time limits or cost associated with them. We explored things like thin clients and 3D model building, and learning things like how long it takes to download and compile the KDE desktop environment on a Pentium 3 system and a dial-up connection (Hint: a really long time!).

It was at this stage while I was also learning what it meant to be in the IT department, and largely self-taught myself web and database technologies, when I gave myself the goal to "do what I do in Windows, in Linux." This was more challenging than it sounds, considering how daunting it was just setting up a printer.

It is only appropriate that since the kids were with me in the beginning of my Linux journey, that their first computer would be running Edubuntu on the same machine I started on, cutting their teeth on gCompris, ChildsPlay and TuxPaint. The only flaw in my vision of Linux nerd-vana was just how well they would figure out the system! My wife walked in on my son, who was acting rather guilty for his age, while he was logging into the computer. Taking a closer look at the failed login she noticed he wasn't logging into his account, he was trying to log in with the username of "daddy." He was five years old then, now he's thirteen, and I have to work to keep just one step ahead of him. It is only a matter of time.

At first, I was nervous when the kids were using computers in school that their time with Linux was going to make things harder for them. I was wrong. Instead, I got an earful about how much trouble the school computers are and each of them has told me, without prompting on my part, they actually prefer Linux. Even now, if it weren't for a graphic-intensive Windows game or some Minecraft mods, though the game itself runs great in Linux, they would not have any reason to use anything but Linux at home. Of course, the two Minecraft servers used by the kids and their friends are running on Linux as well.

The saying "one man's trash is another man's treasure" explains how I managed to go 15 years without purchasing a new computer for my own use.

I have been lucky to receive a dozen old computer systems companies or individuals no longer wanted, through the years. Most of the systems are over five years old and have their hard drive picked clean when I got them, but that wasn't an issue for me. Using one of the "big three" distributions (Fedora, Ubuntu and openSUSE) I can usually get these toss-away computers to be useful in some capacity. I still have a pre-Lenovo IBM laptop I use as a network bridge even though the screen's back light has long since stopped working.

You know what is a big factor in bringing me back to Linux over and over again? It's the diverse community of unique individuals around the world that I have gotten to communicate with online because of this one common interest. I frequent the Ubuntu forums, openSUSE forums and the Fedora forums, among others, and without having to hop on an airline I have talked with people from parts of Europe, Asia, Middle East, South America and possibly even Africa. While the technical assistance has helped me keep my systems running, I really enjoy the non-technical discussions where individuals' cultures can be seen from real people like me.

It was inside the openSUSE forum about a year and a half ago, during a time when all of my laptops had one or more ailment preventing them from being useful, that Malcolm Lewis approached me and offered me one of his laptops that was "collecting dust." That laptop is one of the more powerful systems in the house and is my current primary laptop.

My open story doesn't end there either. Linux and open source has opened door for me professionally and socially as well as helped my programming skills and keeping me in touch with technology trends, but that all will have to wait for another day. 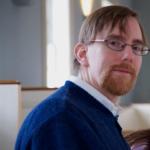 I have always been interested in computers, and would find myself hanging out with the Computer Science students instead of the Aviation Management or Business Management students I was a part of. At home and at work I have been largely self-teaching myself using computers starting with Excel and Access with VBA through ASP and SQL at work.
More about me