How the Actors Bridge Ensemble succeeds as an open organization

Theater group finds success by acting like an open organization

When Vali Forrister co-founded Actors Bridge Ensemble (ABE) in Nashville twenty years ago, she was a new graduate with a master's degree and a passion for the kind of theater that she was seeing in the more cosmopolitan cities.

"The kind of work that would never come to Nashville in the mid-90's," she said. The goal was an ensemble where "people would train together and work together so everyone could go deeper in the work as everyone spoke the same language."

Twenty years on, Actors Bridge Ensemble still brings to Nashville the plays that otherwise wouldn't come to the area, and they're still an ensemble of people working together in the same way they always have.

And on top of that, they've become an exemplary open organization—one in a field far removed from software engineering.

Now, as the producing artistic director of the Actors Bridge Ensemble, Forrister works daily with Jessika Malone, the artistic associate of the Ensemble. Jessika came to ABE through her undergraduate work at Belmont University in Nashville, and continues to produce and direct with ABE while in graduate school for her MFA.

The two of them, with a wide assortment of technical crew and actors, help further the Ensemble's ongoing mission of collaboration—and not just collaboration, but other principles of open management, like transparency, participation, and community, that Jim Whitehurst outlines in The Open Organization. While celebrating ABE's 20th anniversary, Vali and Jessika shared their goals of ensuring the "idea that they are a company of artists invested in each other for the long term" stays strong and vibrant within the Ensemble.

"We are a house that reaches across disciplines and we're very interested in cross-training and being multi-faceted across those disciplines," Jessika said. 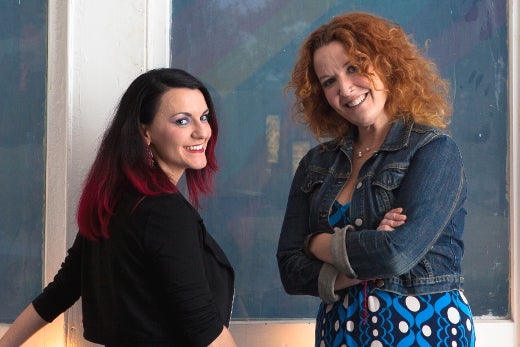 This encouragement comes from first hand experience. Vali started as an actor, but knew that, in order to make a living, she had to perform every other role in a theater company as well. Because she developed ABE as a house built on cross-functional role engagement, she recognized that this wasn't the traditional structure.

"Not just in the theater, but in every discipline, we're forced to specialize so early on that if you are on the acting track you are getting a lot of training but no one is teaching you how to stage manage or direct," she said.

Vali and Jessika have taken the opposite approach: everyone can, and is expected to, do everything.

This isn't just an attitude that is dictated from the top down. The members of the Ensemble also believe in and are attracted to this mentality. They are drawn to the collaboration, the community, and the realization that by taking on more (and more diverse) disciplines within ABE, they will greatly benefit in their own skills and experience.

In every open organization, the tenets of collaboration and transparency lead to passion and conflicts. ABE manages those eventualities in a way that's unique among theater companies.

In many companies, the director is an absolute dictator who orders the entire hierarchy. This just isn't the case at ABE.

"We see the director as more of a facilitator, the person who is helping guide all the contributions of the members towards a common goal. Not that the rest of the members of the organization are there to carry out orders, but they are asked to help bring the play to fruition."

Jessika continued: "We try to build in a community that is based on a sense of collaboration from the get-go, and if you can create intention from the beginning then people are much more willing to go with you."

Near the conclusion of The Open Organization, Jim writes: "An open organization encourages and fosters initiative and creativity among its members." ABE does this not just by empowering employees to share ideas, but also by encouraging them to take risks and try something new.

"If they have ideas, what do you have to lose in letting someone pursue that idea?" Jessika said. "If you give people space to work on projects that might not work out, they will take bigger risks which does lead to bigger rewards."

"Part of the larger process is normalizing risk taking," Vali said. "Why not get up every day and take some crazy huge risk? We foster a culture of fearlessness. No one is afraid to fail because that's part of what risk taking is."

Jim's criteria for open organizations are alive and well in Actors Bridge Ensemble. Their work models the success generated when the leadership and members of a group come together with the goal of "igniting passion and performance." The work the organization does to encourage their members is is something other organizations can emulate—even if they're not in an engineering field.

What next-generation leaders expect: the choice to work openly

A more sustainable future should be a more open future