Managing an app development team like an open organization

It was just a typical, mundane day at school, when I happened to bump into my friend, Sheng Liang, who asked me if I was interested in participating in a competition with his friend, Li Quan. Sheng Liang has an entrepreneurial and competitive mindset, someone we usually see busy with some sort of idea or competition. So I was intrigued by his proposal.

He told me about the "SIA App Challenge"—an app development competition from Singapore Airlines (SIA)—with a grand prize trip to Silicon Valley. 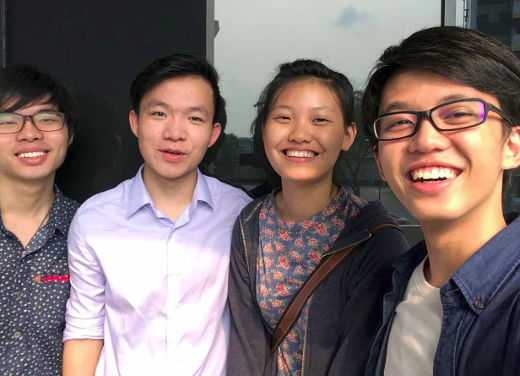 The author and his team. Courtesy of Woo Huiren. CC-BY-SA

You might think I'm crazy. I'm just a high school student, inexperienced and less competent than the competitors. But I prefer to call it "being adventurous." I had nothing to lose by entering the competition, and it would definitely be a fun learning experience. Maybe I could even win. I gave it a shot and used ideas from The Open Organization to shape my team and our approach to the competition.

But I'd already made my first mistake: I joined a competition because I wanted to win something, not necessarily because I felt that the work itself inspired me. The task, in other words, had little intrinsic value.

As Jim whitehurst says in The Open Organization, what motivates people to walk through walls with you is helping them believe in what you're all doing. The extrinsic motivation of this competition was very strong, but it would still not be as strong as an intrinsic one.

I knew I needed to fix this. At this point, our team had a total of three members. I knew we needed another. So I went looking for a high-spirited and passionate person—someone who would bring passion for the work to our team—and finally found Metilda. Metilda is also in the field of Information Technology and has a strong background as an artist who enjoys playing piano and violin. She's always cheerful, happy, and ready to lend others a helping hand. Her quick thinking and optimism is something that would be a great benefit to any open team. We'd found another catalyst.

Onward to the competition

Only one of us knew how to actually make mobile applications (me), and all of us were completely unfamiliar with the platform we needed to use during the competition (IBM Bluemix). Clearly, we were no match in terms of technical skills, so we had to work harder. Our team had to pick up mobile and web development skills as quickly as possible.

We tried our best to prepare, but time was just so tight. I began to feel that my teammates were becoming more and more dependent on me, rather than trusting themselves and their own abilities. From reading The Open Organization, I knew this was a pretty bad sign; centralized leadership would mean a single point of failure. In an open organization, leadership is decentralized, and the project lead would act as a catalyst and set the direction.

Finally we were briefed on the competition and its theme: improving flight experience for Singapore Airlines customers. Lots of other folks were there too—Google, IBM, SkyScanner, Mastercard, and Amadeus. Each of these companies also gave a talk on offerings that might help the teams with their prototype development. Our presentation of a solution—and a working prototype—would be due seven days later.

We needed to act quickly. First, we wanted to understand the problem and generate some ideas for our solution. We visited places like Changi Airport to seek inspiration. We interviewed people who were departing and asked about their flight experiences. Through that, we learned that most of the big problems already had solutions that most passengers found acceptable. That left minor inconveniences for us to address.

Open organizations are especially good at balancing inputs from internal and external communities, so I treated both my interviewees and my teammates at the airport like equal developer communities, constantly seeking their input, and opinions. Just by asking relevant and thought-provoking questions, one can build engagement—both within the team itself, and with external communities. People want to feel that they have a say in a group's activities. The initial research helped us iterate more quickly, too.

"What do you think of being able to call for the steward using your phone?" I asked some interviewees, who responded with thoughtful and helpful feedback, indicating that nothing was more convenient than the overhead button, so we moved on.

​After a day of research, we collected our thoughts and discussed problems and potential ways of solving them. By this point, we'd grown accustomed to acting like a tiny open organization. We'd already tuned in, for example, to the "sparks" that started flying when our teammates started automatically questioning the practicality and innovative value of ideas we devised. After the mood was set, none of us took criticisms personally, and we went with a "fail fast" model. As The Open Organization said they would, the ideas we came up with after thoughtful debates were a lot better than what we initially had.

On top of that, I believe this method of working helped us build a very trusting culture between us, where we would not be afraid to voice our ideas and take feedback to iterate on them.

At one point, for instance, we'd come up with two workable ideas, one targeted at improving flight experience through having a Tinder-style matching system to help travelers find a partner to travel with, and another targeted at minor refinements. The minor refinements were things like being able to use the in-flight entertainment through phone, order food, etc. But the next day, we sought opinions from our lecturers, and they criticised the usefulness of both our models. So we scrapped them both and decided to do something different: We decided to do a voice controlled virtual assistant that could help travellers plan, book, and pay for flights, as well as find potential traveling partners via a Tinder-style matching system.

To win, sing along

On the day of our pitch, we took a different approach for the presentation: we sang to the judges.

Have you ever thought of traveling?
We'll like to simplify your trip
For SIA and audience, and so many others,
Here's something we did!
Typing's mainstream everyone says
So we've tuned it up a bit (literally)
With IBM's bluemix and Amadeus's sandbox and MasterCard to give tips
We can now personalize, and recommend with just a touch of hand
You can now never fear loneliness, so you can just relax
You can now book flights, or cancel them, or change to another plan
We simplify ...
We simplify ...
For you.

We could only present an unfinished prototype, and we didn't survive past the competition's first round. But I was quite happy with the amount of effort we'd put into our work. Looking back, it was a brilliant and fun learning experience, and I would definitely do it again if I could rewind time.

Most importantly, the experience provided an effective testing ground for the ideas and strategies in The Open Organization. The competition proved to me that the book could hold true to its word and can be applied, even in the smallest organizations.

In it together: When your manager is your greatest advocate