We look back at 3D printing innovations in 2016. 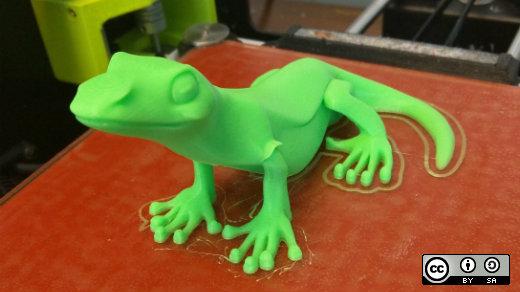 Open source continues to drive rapid innovation in the 3D printing industry. This makes sense if you stop and think about it—a 3D printer exists to make other things. Combining that philosophy with free software and open source hardware helps other people participate in improving the objects that it makes, and in making the printers faster, smarter, and cleaner.

Here are a few of my favorite open source 3D printing innovations from 2016: 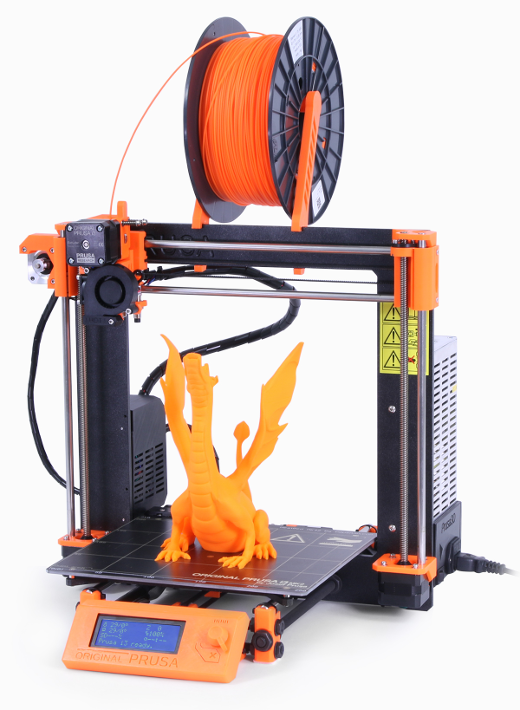 Josef Průša is one of the core developers of the RepRap project, and the line of printers that bears his name continues to get better and better, without sacrificing any of the open source goodness that makes it possible. In 2016, the Prusa I3 MK2 3D printer was released, and it is the first printer to correct its geometry in all axes automatically. This means that you no longer have to be as concerned about how precisely the printer is assembled or calibrated—the firmware included in the printer will do everything it can to ensure that the prints come out perfect. The printer uses nine special calibration points on the printer bed, combined with a probe that detects those points, then determines the deviation (if any) on the X and Y axes. This allows the printer to recalculate and adjust for any skew. It uses the same input to determine the Z height at all of the calibration points and adjust as needed. This technique is called mesh bed leveling and it eliminates most (if not all) imperfections in the bed.

There's a lot more math and engineering to explain how all of this works, but the end result is better prints every time, all powered with open source firmware and hardware. For a deeper dive into how it works, learn more on the Prusa Printers site, or watch this video: 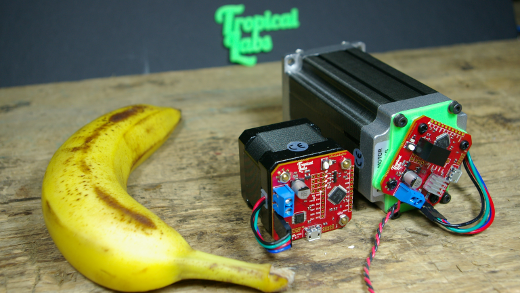 3D printers are usually powered by NEMA stepper motors. The motors turn belts, which cause the printer to move in three dimensions. The motors are cheap and simple, but not terribly accurate. To get accuracy, you usually want to use industrial servo motors, but they aren't cheap or simple. Enter Tropical Labs and their Mechaduino.

Mechaduino is an open source industrial servo control platform that provides a combination of the low cost of mass-produced stepper motors with high-resolution accuracy. Their vision is to be the “Arduino for mechatronics". Although this innovative board will have a big impact on a number of different electronics projects, the fact that this can be a drop-in addition to most 3D printers makes it very exciting to me. Lots of people agreed, as this easily got funded via Kickstarter, reaching 855% of their goal. 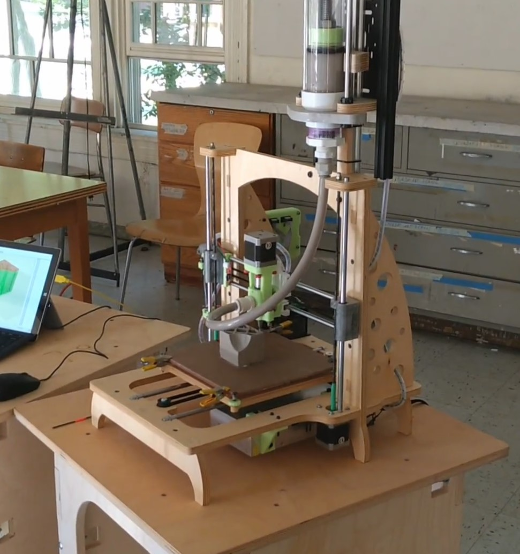 Most 3D printers use plastic filament or resin. A few use more exotic materials, such as sugar or chocolate, but Tom Lauerman wanted to use clay. Lauerman, an assistant professor at Penn State, designed his own 3D printer in collaboration with the University's Learning Factory program and the Center for Innovative Material Processing through Direct Digital Deposition (CIMP-3D). Unlike some academic printer projects, the Bricoleur Clay Extruder wasn't built from scratch, patented, documented in an academic paper that few would ever read, and then shelved in a dusty basement on campus. Lauerman built upon existing open source 3D clay print head designs, and as a result, he remained committed to releasing all of his designs under an open source license so that others could print and improve upon his design. 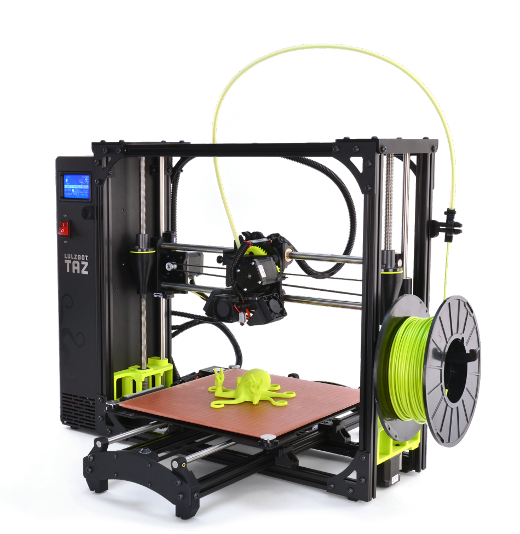 I am a huge fan of the Lulzbot printers, and the TAZ 6, released in 2016, is no different. There is a reason that it is “Earth's highest rated desktop 3D printer," and that reason is freedom. Everything that goes into the TAZ 6 is free as in freedom—the firmware that drives it, the parts that compose it, the software that controls it—there is no secret sauce in this printer. The TAZ 6 is yet another proof point that open source does not mean sloppy or beta.

The printer itself contains a large number of 3D-printed pieces, printed on a fleet of other TAZ printers. Freedom and open source are part of the Lulzbot DNA, and the parent company (Aleph Objects) actively works with their community to come up with hacks, improvements, and modifications to make the printer more robust, accurate, and intelligent. The result of this transparency, remixing, and collaboration is a simple yet powerful 3D printing experience that appeals to an audience from students to maker gurus.

(Full disclosure: We use Lulzbot 3d printers in the Red Hat 3D printing lab at the Red Hat headquarters in Raleigh, North Carolina.) 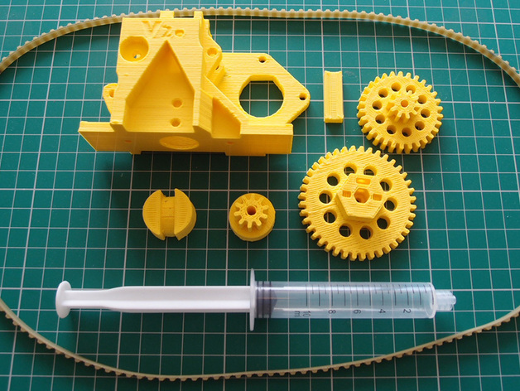 Early in 2016, Ourobotics, an Irish 3D bioprinting startup, introduced the Renegade, an open source bioprinter that can be assembled for under US$ 900. This printer is based on Richard Horne's Universal Paste Extruder. For much of the 3D printing community, bioprinting is seen as a holy grail of the technology. If we can print replacement organs, then we can improve and save lives around the world. We're not quite there yet, but Ourobotics saw the value of innovating in the open source way to help us get to that goal faster and more affordably.

Sadly, in August, the CEO of Ourobotics, Jemma Redmond passed away unexpectedly. One of the small comforts of open source work is the knowledge that those projects can live on, even after we are gone from this world.

Tom Callaway - Red Hat employee since 2001. Co-author of "Raspberry Pi Hacks" (O'Reilly, 2014). Currently leading the Education Outreach team at Red Hat to promote FOSS in schools. Maintains or co-maintains a large number of Packages in Fedora (350+), and is responsible for managing Fedora's Legal issues. Frequently represents Fedora and Free Software at conferences around the world, and tries his best not to make too big of a fool of himself. When not working, Tom enjoys geocaching, ice hockey, gaming,...
More about me

Seriously, you could not get a better photograph of a 3D printed item to lead this story. All the FDM printers featured in the story are capable of printing at a level of quality and accuracy that a few years ago would have required a printer many times more expensive. Open source no longer means having to accept low quality and shoddy prints or endless tinkering to get acceptable output. It now comes with high level of reliability and consistency that is leveraging makers and designers to be able to use 3D printer as production machines.

I totally agree. In fact, I gave them a different picture for the top of this article. Not sure why this one was used instead.

And now the picture is much better. :) Thanks Jen!

I've been watching 3D printing for a long time, awesome tech however a couple of things holding me back
1. It uses plastic. The world already has too much plastic, it's destroying our marine eco-systems (no I'm not a greenie but I do want my kids to have future food security). So I was pleasantly surprised to see a clay printer here.
2. Lack of color. I know there are multi-color printers now but $$$$. Are there any cheap multi-color printers you can add to the list? (yes, yes i understand they will likely use PLA despite my earlier objection ... still interesting though LOL)

1) There are a lot of new materials coming into the 3d printing space. There are several wood-based filaments (with a small amount of plastic mixed in), metal-based filaments (again, with a small amount of plastic mixed in), even coffee and beer based filaments. I think of it this way: Plastic isn't going away. We can use it responsibly, and dispose of it responsibly, or not. The 3d printer doesn't change that decision, but it does make it easier for you to take more control of _how_ you use plastics in your life.

i want know what is the volume build of Prusa i3 MK2 and Speed ??

I don't know what the speeds are, but that stat is generally not one that is terribly useful, since the speed is adjustable.