11 reasons to use the GNOME desktop environment 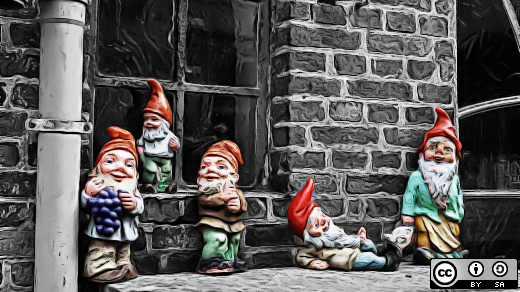 Late last year, an upgrade to Fedora 25 caused issues with the new version of KDE Plasma that made it difficult for me to get any work done. So I decided to try other Linux desktop environments for two reasons. First, I needed to get my work done. Second, having been using KDE exclusively for many years, I thought it might be time to try some different desktops.

The first alternate desktop I tried for several weeks was Cinnamon which I wrote about in January, and then I wrote about LXDE which I used for about eight weeks and I have found many things about it that I like. I have used GNOME 3 for a few weeks to research this article.

Like almost everything else in the cyberworld, GNOME is an acronym; it stands for GNU Network Object Model. The GNOME 3 desktop was designed with the goals of being simple, easy to access, and reliable. GNOME's popularity attests to the achievement of those goals.

GNOME 3 is useful in environments where lots of screen real-estate is needed. That means both large screens with high resolution, and minimizing the amount of space needed by the desktop widgets, panels, and icons to allow access to tasks like launching new programs. The GNOME project has a set of Human Interface Guidelines (HIG) that are used to define the GNOME philosophy for how humans should interface with the computer.

My eleven reasons for using GNOME 3

GNOME is a desktop unlike any other I have used. Its prime directive is "simplicity." Everything else takes a back seat to simplicity and ease of use. It takes very little time to learn how to use GNOME if you start with the getting started tutorial. That does not mean that GNOME is deficient in any way. It is a powerful and flexible desktop that stays out of the way at all times.

Nobody in his right mind tries to use KDE on a Red Hat product -- unless he's masochistic. Alternatively, if you want to use GNOME one needs look no further than Red Hat.

Not sure about that. I used to use Mandrake/Mandriva and it was an excellent RedHat based KDE distro. Even Fedora is mostly OK with KDE. It's not ideal but it mostly works.

Yeah, I remember how much I liked Mandrake when I was playing with it almost a decade and a half ago... It was so polished compared to many other big distros.

It is funny, because Linus Torvalds is using KDE on fedora...

I started using KDE on RHEL 5 because I was getting frustrated with GNOME. As with many choices, a lot of it comes down to personal preference.

i3 may not be a DE but it's fast, simple, lightweight and what I use when KDE is too buggy or resource-heavy. Far easier to build the latest i3 than GNOME on distros without the latest version in their official repos.

How about mentioning the great extensions?

Gnome is a good desktop environment but between Gnome, KDE and Xfce I find Gnome the heaviest. While the difference may not be drastic on newer systems, on my older systems (I think 7+ years old at the youngest) small differences can be noticeable.

KDE surprised me when I tried Neon and it clocked in around 700MB idle. More than Xfce but less than Gnome (both by ~ 200MB). More significantly the lag in how long actions take is more significant with Gnome. I can use a stopwatch to time how long it takes for the Dash to open, with animations off. I don't get the same slow-down in the other environments.

Gnome does, however, have a lot of positive features and feels comfortable. I prefer a number of GTK applications over their Qt equivalent and the idea of features such as Online Accounts.

Gnome definitely benefits from the breadth of extensions available from helpful utility to fun add -on.

I look forwards to seeing what the folks at Ubuntu bring into the fold for Gnome.

Most of the listed "reasons" are actually not reasons, it's mostly PR. Let me know when Gnome offers sane configuration choices. I don't have a problem with simplicity, but I do have a problem with simplicity forced on me. I want to be able to configure this thing if I wanted to. Simplicity can easily be achieved with sane defaults backed by configuration choice. Also many configuration goals can be achieved by plugins (glorified by another commenter here) but why do the Gnome devs make it so complicated to achieve basic configuration goals? Why do I have to remember esoteric key combinations in order to execute the most basic functions?

Clean desktop? The default layout of KDE presents just one taskbar at the bottom which is fully functional. It is "cleaner" than the screenshot in your article.
Also, I never see more than 300-400MB of memory usage on first boot of KDE (5.9.x or greater). Seems this is not a relevant argument anymore. Besides it feels as snappy as any other desktop.
Most objections against KDE are historical, IMO, and latest iterations are nothing short of awesome in terms of looks and functionality.

My whole familly uses it, and even our grandmother loves it ;)))

My best user desktop experience ever. And I tried may systems in last 30 years ...

Out of the box, Cinnamon was pretty clean and easy to use for me. I can't stand Gnome 3, it's to simplistic like Unity for Ubuntu became.

Personally, I just like how easily Gnome installs on vanilla Debian, and works well out of the box. For VMs and slower boxes, I still prefer LXDE. Gnome just happens to work fine for what I use my main box for. I barely see my desktop with all the programs open anyway, and I usually hit the windows menu key and either click a shortcut or type the first few letters of the program I need. Since I can do that on most DEs, these "wars" are largely irrelevant to me.

Opinions. The same as trying to scream out which type of coffee is best...

I will state very clearly that I began to hate Gnome after 1.4.6. - utter lack of ability to customise it to my liking - and then the chaotic nature of all the mixed GTK libraries...ARGH!

That being said, I shunned Gnome for years. "Gee! No me!" was my fave phrase - up until recently.

I believe in functionality. "Eye candy" is all nice and fine and dandy for some, but for me, I just want something that works. And keeps working. And continues to work after updates/upgrades. (Like WindowMaker?)

I've used nearly all "window manglers" and "desktop environmental disasters" - as curiosity and progress bait me...

That being the case, in the past two years, very little has impressed me...and I can only speak for ME, no one else. I continuously go back to my beloved "WindowMaker" because it's consistent, stable, albeit "mystical" in some respects. Gnome 3 - or the 3.22 "recent release" - actually DID impress me...enough to cause me to actually "chuck it all in" and install the whole "kit'n'kaboodle". Gnome-shell extensions and the whole "whoo-ha". I haven't done THAT in a long time...(since Enlightenment DR17).

I've even tested it on absolute "n00bs". Very little to show, and "whoosh!" - they're off. THAT impressed me even more.

It's obviously NOT perfect, and will continue to "progress"...but I *am* extremely gobsmacked at where it's come - especially in knowing it's past and the progression from there to here - now.

Ergonomically sensible, practical and logical. Clean. Configurable and easy to customise. Very little "hiccup" in any sense. Switching applications and desktops - easy peasey. Which I do quite often. I still can't believe that I'm this impressed with it.

Again, however, it's all on preference. "Fanboys" will hate - as is the nature of the beast - and rant about everything else on the planet. That's fine. That's FREEDOM. And it's nice.

I laud the Gnome team for their efforts and for what has finally come. I'm thankful and grateful for all the time and energy - and thought - that have been poured into this project.

If you've not played with it, please, by all means, do so. Give it a shot. For "n00bs", I'm now highly recommending this (for first-time linux users) as the first "desktop environment" to test.

Have been using Gnome since I first installed Fedora. I have never seen a desktop environment do EVERYTHING as well as it does! Kudos to the developers, and I hope it never goes the way of Canonical!....LoL!

That sounds hideous. I usually have dozens of applications running simultaneously that I need to constantly switch back and forth between. If I have to move the mouse all the way to the left, click on the activity menu, then click on a "matrix".... I've already died of frustration...

I use MATE, for one very simple reason: I work with 2 huge monitors, the desktop seamlessly spanning both. With MATE I get the nice old school functionality of having a task/menu bar running the length of each monitor, displaying all the apps that are visible *on that monitor*. It's intuitive, it's simple, it makes perfect sense. Look slightly down, see the relevant running app button, click it, look slightly up again - there's the app.

Can GNOME3 do that?

Gnome makes it unnecessarily difficult to move the dash to the bottom of the screen Mac-style. It ought to be a "right-click" option built into the dash itself.

I use a weak GNOME and have some problems, 1. sharing lan to wireless dont workind (on kde it works weary well), 2. right click to great a text file not working, (there is only new folder). But an other way it is stabile then kde. Now I use Atheros Arch Gnome, before used KDe on Fedora, Manjaro but there are many bugs. Kde have a very good function, it is kdeconnect. very good function. It's all. Thank you.