Go on an adventure in your Linux terminal 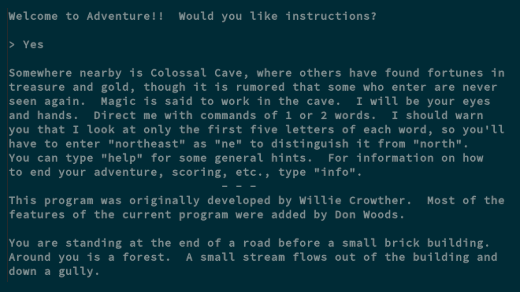 Today is the final day of our 24-day-long Linux command-line toys advent calendar. Hopefully, you've been following along, but if not, start back at the beginning and work your way through. You'll find plenty of games, diversions, and oddities for your Linux terminal.

"If the last day of your advent calendar is not ESR's [Eric S. Raymond's] open source release of Adventure, which retains use of the classic 'advent' command (Adventure in the BSD Games package uses 'adventure), I will be very, very, very disappointed. ;-)"

What a perfect way to end our series.

Colossal Cave Adventure (often just called Adventure), is a text-based game from the 1970s that gave rise to the entire adventure game genre. Despite its age, Adventure is still an easy way to lose hours as you explore a fantasy world, much like a Dungeons and Dragons dungeon master might lead you through an imaginary place.

Rather than take you through the history of Adventure here, I encourage you to go read Joshua's history of the game itself and why it was resurrected and re-ported a few years ago. Then, go clone the source and follow the installation instructions to launch the game with advent on your system. Or, as Joshua mentions, another version of the game can be obtained from the bsd-games package, which is probably available from your default repositories in your distribution of choice.

Do you have a favorite command-line toy that you we should have included? Our series concludes today, but we'd still love to feature some cool command-line toys in the new year. Let me know in the comments below, and I'll check it out. And let me know what you thought of today's amusement.

Be sure to check out yesterday's toy, The Linux command line can fetch fun from afar, and I'll see you next year!

The Linux command line can fetch fun from afar

Use these tools to access weather, reading material, and more from remote locations.