A well-chosen name can greatly influence the success of your software product. Here's how to pick the perfect one. 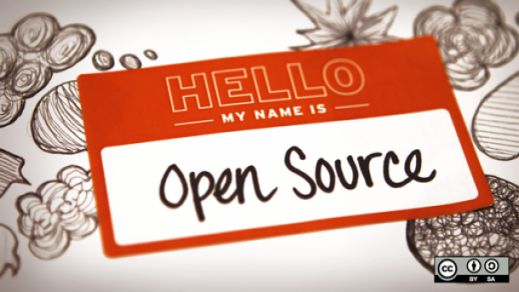 Working on a new open source project, you're focused on the code—getting that great new idea released so you can share it with the world. And you'll want to attract new contributors, so you need a terrific name for your project.

We've all read guides for creating names, but how do you go about choosing the right one? Keeping that cool science fiction reference you're using internally might feel fun, but it won't mean much to new users you're trying to attract. A better approach is to choose a name that's memorable to new users and developers searching for your project.

Names set expectations. Your project's name should showcase its functionality in the ecosystem and explain to users what your story is. In the crowded open source software world, it's important not to get entangled with other projects out there. Taking a little extra time now, before sending out that big announcement, will pay off later.

Here are four factors to keep in mind when choosing a name for your project.

What does your project's code do?

Start with your project: What does it do? You know the code intimately—but can you explain what it does to a new developer? Can you explain it to a CTO or non-developer at another company? What kinds of problems does your project solve for users?

Your project's name needs to reflect what it does in a way that makes sense to newcomers who want to use or contribute to your project. That means considering the ecosystem for your technology and understanding if there are any naming styles or conventions used for similar kinds of projects. Imagine that you're trying to evaluate someone else's project: Would the name be appealing to you?

Any distribution channels you push to are also part of the ecosystem. If your code will be in a Linux distribution, npm, CPAN, Maven, or in a Ruby Gem, you need to review any naming standards or common practices for that package manager. Review any similar existing names in that distribution channel, and get a feel for naming styles of other programs there.

Who are the users and developers you want to attract?

The hardest aspect of choosing a new name is putting yourself in the shoes of new users. You built this project; you already know how powerful it is, so while your cool name may sound great, it might not draw in new people. You need a name that is interesting to someone new, and that tells the world what problems your project solves.

Great names depend on what kind of users you want to attract. Are you building an Eclipse plugin or npm module that's focused on developers? Or an analytics toolkit that brings visualizations to the average user? Understanding your user base and the kinds of open source contributors you want to attract is critical.

Great names depend on what kind of users you want to attract.
Take the time to think this through. Who does your project most appeal to, and how can it help them do their job? What kinds of problems does your code solve for end users? Understanding the target user helps you focus on what users need, and what kind of names or brands they respond to.

When you're open source, this equation changes a bit—your target is not just users; it's also developers who will want to contribute code back to your project. You're probably a developer, too: What kinds of names and brands excite you, and what images would entice you to try out someone else's new project?

Once you have a better feel of what users and potential contributors expect, use that knowledge to refine your names. Remember, you need to step outside your project and think about how the name would appeal to someone who doesn't know how amazing your code is—yet. Once someone gets to your website, does the name synchronize with what your product does? If so, move to the next step.

Who else is using similar names for software?

Now that you've tried on a user's shoes to evaluate potential names, what's next? Figuring out if anyone else is already using a similar name. It sometimes feels like all the best names are taken—but if you search carefully, you'll find that's not true.

The first step is to do a few web searches using your proposed name. Search for the name, plus "software", "open source", and a few keywords for the functionality that your code provides. Look through several pages of results for each search to see what's out there in the software world.

Similar non-software product names are rarely an issue unless they are famous trademarks—like Nike or Red Bull, for example—where the companies behind them won't look kindly on anyone using a similar name. Using the same name as a less famous non-software product might be OK, depending on how big your project gets.

How big do you plan to grow your project?

Are you building a new node module or command-line utility, but not planning a career around it? Is your new project a million-dollar business idea, and you're thinking startup? Or is it something in between?

If your project is a basic developer utility—something useful that developers will integrate into their workflow—then you have enough data to choose a name. Think through the ecosystem and how a new user would see your potential names, and pick one. You don't need perfection, just a name you're happy with that seems right for your project.

If you're planning to build a business around your project, use these tips to develop a shortlist of names, but do more vetting before announcing the winner. Use for a business or major project requires some level of registered trademark search, which is usually performed by a law firm.

Finally, when choosing a name, avoid these common pitfalls:

Good luck—and remember to take the time to step out of your shoes and consider how a newcomer to your project will think of the name.

Shane Curcuru - Shane is founder of Punderthings℠ LLC consultancy, helping organizations find better ways to engage with the critical open source projects that power modern technology and business. He blogs and tweets about open source governance and trademark issues, and has spoken at major technology conferences like ApacheCon, OSCON, All Things Open, Community Leadership Summit, and Ignite. Shane...
More about me

Play the Busy Beaver Game through a simulator

After reading this beautyful blog I feels the important of Project Name :+1

Agreed - a good name is the first thing newcomers will think of when they come to your project.

We're considering a follow up article with a more step-by-step process to how to evaluate names, so if folks have links that talk about the name choice process, let me know!

"Who else is using similar names for software?"

Talk about that... In the '90s when you tried to search for something about SPICE (the circuit simulator) you would get lots of result related to "Spice Girls"...

Yes, but trademarks (generally) only apply when the goods - or the product - are similar. So just searching for the name itself often doesn't help. Searching for "YourName software" or with download, or open source, or a few words about the functionality your program provides is what you need to do.

No-one would confuse your software program with the Spice Girls, either the original ones or the reunion tour (I like the original set list best, myself!)