Get a real-time view of the processes running on Linux to fix slowdowns and other problems.

This article is excerpted from chapter 13 of the book Linux in Action, published by Manning.

Has the performance of your Linux machine been erratic or unusually slow? Do you suspect that growing demand might be outstripping your available resources? Here are some questions you should be asking yourself:

More Linux resources
Where should you look for answers? The top program is a great place to start. It can give you a rich, self-updating overview of the processes running on your system.

The figure below shows a typical screen of top data. The first line provides the current time, the elapsed time since the most recent system boot, the number of users currently logged in, and load averages for the last minute, five minutes, and 15 minutes. This information can also be returned by running uptime. 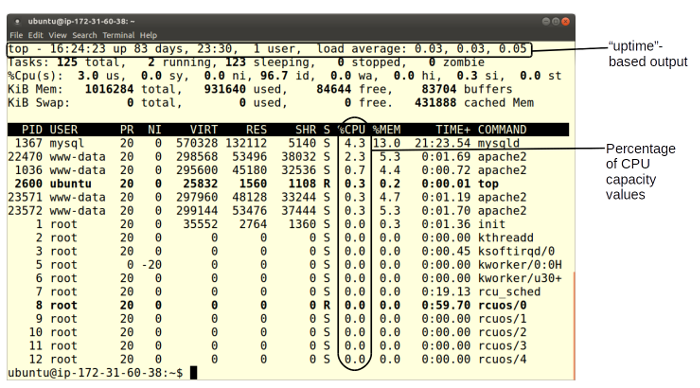 A snapshot of process data displayed by top.

Since we're trying to resolve performance problems, the columns of data that should interest us the most are %CPU (percentage of CPU capacity currently used by a given process) and %MEM (percentage of memory capacity). You'll especially want to note the processes showing up at the top of the list.

In this case, you can see that the MySQL daemon is using 4.3% of the server's CPU and, from the next column, 13% of its memory. If you follow that row over to the left, you'll see that the process ID (PID) is 1367 and the process is "owned" by the mysql user.

Perhaps you'll conclude that this process was taking more resources than can be justified and will have to be sacrificed (for the greater good, you understand). That top display gave you everything you'll need to kill it. Since MySQL is a service managed by systemd (on those distros using systemd), your first choice should be to use systemctl to bring the process down gently without putting any application data at risk.

If the process you want to shut down is not managed by systemd, or if something's gone wrong and systemctl failed to stop it, then you can use either kill or killall to eliminate your process. Some systems require you to install killall as part of the psmisc package. You pass the PID to kill this way:

killall, on the other hand, uses the process name rather than its ID.

To kill or to killall, that is the question. Actually, the answer is kind of obvious. kill will shut down a single process, based as it is on the PID, while killall will kill as many instances of a particular program as are running. So if there were two or three separate MySQL instances—perhaps belonging to separate users—all would be stopped. Before launching killall, make sure there aren't any similarly named processes you still want running that could become "collateral damage."

Of course, you'll also have to run systemctl disable to make sure the process doesn't restart the next time you boot.

In case you ever need them, the third line of top output you saw a bit earlier gives us time values (as percentages) for a number of other CPU metrics. Here's a quick rundown of the jumble of acronyms you'll see there:

The top display can be customized in real time through keyboard input. Type h to learn more.

Dying to see top in action but, wouldn't you know it, everything is running smoothly?

Why not simulate crisis-level CPU overload? Much like children, yes will output (digital) noise continuously until told to stop. On second thoughts, that's not at all like children.

This command will redirect that noise to the disposable /dev/null file and the & character will push the process into the background, giving control of the command line back to you. To ramp up the pressure, launch the command a few more times.

That should keep 'em busy. While all that's running, watch top to see what's happening. You could also try to run other applications to see how much it will take to slow them down. When you're done, run killall to knock off all your yes sessions in one go.

David Clinton - DAVID CLINTON is a system administrator, teacher, and writer. He has administered, written about, and created training material for many important technology subjects including Linux systems, cloud computing (AWS in particular), and container technologies like Docker. He is the author of Manning's Learn Amazon Web Services in a Month of Lunches and...
More about me

I've used top quite a bit to see what's going on when some memory-intensive Python script runs in Scribus. Lately, I have been using KSysGuard, which is similar to top, though it shows a graphical display of CPU activity, memory usage, including swap, and network activity. I have a Windows 10 VM set up and was trying to figure out what settings to use, since it was clogging my system. I thought that setting it to just use 1 CPU would be the answer, but I could see that what it was doing was rapidly switching from 100% use of one CPU to 100% of the other. Eventually, I found that setting it to use both CPUs, but at a limit of about 54% allowed the VM to run better and didn't choke my Fedora off. Even so, it's amazing how much Windows churns the CPUs and memory even when you have no applications running, compared with Linux by itself, where things are very quiet when you're not doing anything, even though you might have a browser and mail client both up and running.

What did you use to limit the Win10 VM...cgroups?

I used the settings in VirtualBox

I guess that does make more sense. :)

I had similar experiences with Virtualbox; especially when CPU is Corei3 (corei5, corei7 and better less issues)

Make sure to disable the Virtual Memory in windows if you have enough RAM, or make it fixed - at least 4GB. If you do not share resources, disable the "server" service. make sure you set performance to background services and "Adjust to best performance". Do not use any background pictures and disable power saving features.

On the subject of vm's and top, virt-top is worth a look if you are a zen or kvm user...

You can also use an alternative 'htop' which has similar features and semi graphical output for each cpu core.

I'd also recommend htop as well. Being Linux, there seem to be a wide range of utilities to meet everyone's individual needs here, glances is another text based dashboard type view which is quite popular. For I/O stats there is, of course, iotop as well.

atop is another alternative, it gives more of a whole-system view.