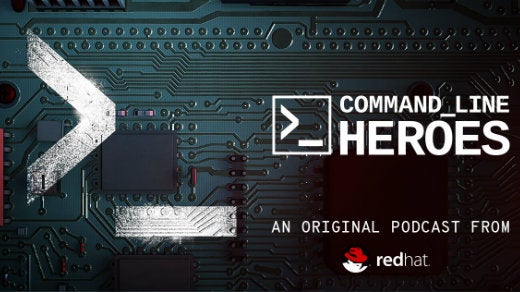 In the first two episodes, developer and host Saron Yitbarek tells the tales of how open source software and Linux gained momentum in the 80s and 90s. Then, in the next four episodes before the season finale, she gives brief yet powerful histories of agile, DevOps, containers, and the cloud.

Let's take a look at the agile and DevOps episodes. Next time, I'll brief you on containers and the cloud episodes.

With the advent of the internet, companies needed to deliver services and applications lightning fast. "It's all about faster time to market, increased agility, doing more iterative, rather than longer-term big pieces of work," said Richard Henshall, an Ansible product manager.

Developers were the heroes and heroines who rode in to save the day, and the role of the developer rose to prominence and prestige like it never had before. As with any change of this magnitude, the processes by which developers worked were analyzed, tried, tested, and reimagined. Enter two big changes to the way developers would work moving forward: agile and DevOps.

The agile method was born at a software development retreat in Utah during the winter of 2001. There, the manifesto was drawn up, and its list of principles begins:

"Our highest priority is to satisfy the customer through early and continuous delivery of valuable software. Welcome changing requirements, even late in development. Agile processes harness change for the customer's competitive advantage."

Agile continues to gain adoption by developers today, and the popular TV show Silicon Valley produced this clip on agile (and scrum):

To hear more about the rise of agile, listen to Episode 3.

Jonah Horowitz, who works for the Reliability Engineering team at Stripe, describes the problem this way:

"The operations team is often measured by uptime and reliability, and one of the biggest ways to increase uptime is to decrease the amount of change in the system. But of course, releasing new features is changing the system, and the software engineers who are doing product work are incentivized to ship as many features as quickly as possible. So you set up this conflict between dev and ops when you've got these separate roles."

Scott Hanselman, principal program manager for .NET and ASP.NET at Microsoft, describes the solution this way:

"The Wikipedia entry from 2008 that defines DevOps is actually very good. So, it's a set of practices that is intended to reduce the time between committing a change and that change going into production while ensuring quality. So if you think about, hey, I checked in some code. It's Tuesday and that will be going out in the June release. That sucks. That would be not continuous integration. That would be a couple-of-times-a-year integration.

If you have a good healthy DevOps system, if you've done the set-up practices, then you are going to be continuously integrating into production. So it's, what can you do? What best practices can you define, can you create, that will allow you to get it? So, I checked in some code on Tuesday and it's in production on Thursday. Now here's the important part—pause for effect—while ensuring high quality."

Gordon Haff, a senior manager at Red Hat, talks about what it takes to do DevOps right:

"You really need a whole new ecosystem of tooling to do DevOps most effectively. What we see is this huge collection of new types of tooling and platforms that DevOps can make use of. They're really all coming out of open source."

To hear more about how developers and IT leaders addressed the issues of speed and mindset with DevOps practices, plus the role automation plays, listen to Episode 4.

I'll conclude this wrap-up with some great links and further reading that I felt were important to include.

Find out what journalists and the great thinkers of agile have written on the subject.

Articles on this history of agile:

Reflections by those who wrote the manifesto:

Find out what the big thinkers in DevOps are saying.