How the four components of a distributed tracing system work together

Learn about the major architectural decisions in distributed tracing, and how the pieces fit together. 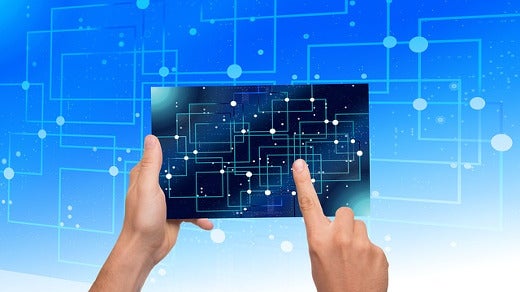 Ten years ago, essentially the only people thinking hard about distributed tracing were academics and a handful of large internet companies. Today, it’s turned into table stakes for any organization adopting microservices. The rationale is well-established: microservices fail in surprising and often spectacular ways, and distributed tracing is the best way to describe and diagnose those failures.

That said, if you set out to integrate distributed tracing into your own application, you’ll quickly realize that the term “Distributed Tracing” means different things to different people. Furthermore, the tracing ecosystem is crowded with partially-overlapping projects with similar charters. This article describes the four (potentially) independent components in distributed tracing, and how they fit together.

Most mental models for tracing descend from Google’s Dapper paper. OpenTracing uses similar nouns and verbs, so we will borrow the terms from that project:

If you would like to dig into a detailed description of this mental model, please check out the OpenTracing specification.

From the perspective of an application-layer distributed tracing system, a modern software system looks like the following diagram: 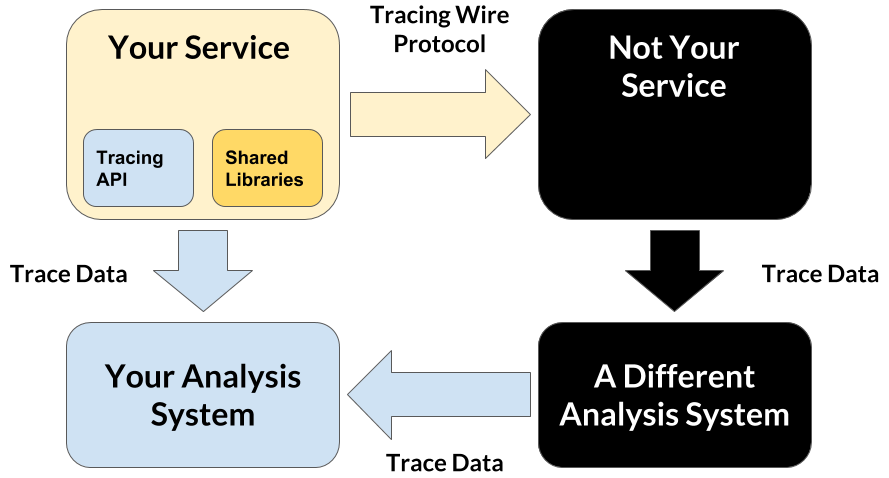 The components in a modern software system can be broken down into three categories:

These three components have different requirements and drive the design of the Distributed Tracing systems which is tasked with monitoring the application. The resulting design yields four important pieces:

To explain this further, we’ll dig into the details which drive this design. If you just want my suggestions, please skip to the four big solutions at the bottom.

Application code, shared libraries, and shared services have notable operational differences, which heavily influence the requirements for instrumenting them.

In any particular microservice, the bulk of the code written by the microservice developer is the application or business logic. This is the code that defines domain-specific operations; typically, it contains whatever special, unique logic justified the creation of a new microservice in the first place. Almost by definition, this code is usually not shared or otherwise present in more than one service.

That said, you still need to understand it, and that means it needs to be instrumented somehow. Some monitoring and tracing analysis systems auto-instrument code using black-box agents, and others expect explicit "white-box" instrumentation. For the latter, abstract tracing APIs offer many practical advantages for microservice-specific application code:

The utility code present in most applications—code that handles network requests, database calls, disk writes, threading, queueing, concurrency management, and so on—is often generic and not specific to any particular application. This code is packaged up into libraries and frameworks which are then installed in many microservices, and deployed into many different environments.

This is the real difference: with shared code, someone else is the user. Most users have different dependencies and operational styles. If you attempt to instrument this shared code, you will note a couple of common issues:

So, an abstract API which (a) has no dependencies, (b) is wire protocol agnostic, and (c) works with popular vendors and analysis systems should be a requirement for instrumenting shared library code.

Finally, sometimes entire services—or sets of microservices—are general-purpose enough that they are used by many independent applications. These shared services are often hosted and managed by third parties. Examples might be cache servers, message queues, and databases.

So, an abstracted tracing API would help libraries emit data and inject/extract Span Context. A standard wire protocol would help black-box services interconnect, and a standard data format would help separate analysis systems consolidate their data. Let's have a look at some promising options for solving these problems.

As shown above, in order to instrument application code, a tracing API is required. And in order to extend that instrumentation to shared libraries, where most of the Span Context injection and extraction occurs, the API must be abstracted in certain critical ways.

The OpenTracing project aims to solve this problem for library developers. OpenTracing is a vendor-neutral tracing API which comes with no dependencies, and is quickly gaining support from a large number of monitoring systems. This means that, increasingly, if libraries ship with native OpenTracing instrumentation baked in, tracing will automatically be enabled when a monitoring system connects at application startup.

Personally, as someone who has been writing, shipping, and operating open source software for over a decade, it is profoundly satisfying to work on the OpenTracing project and finally scratch this observability itch.

In addition to the API, the OpenTracing project maintains a growing list of contributed instrumentation, some of which can be found here. If you would like to get involved, either by contributing an instrumentation plugin, natively instrumenting your own OSS libraries, or just want to ask a question, please find us on Gitter and say hi.

In order for monitoring systems to interoperate, and to mitigate migration issues when changing from one monitoring system to another, a standard wire protocol is needed for propagating Span Context.

The w3c Distributed Trace Context Community Group is hard at work defining this standard. Currently, the focus is on defining a set of standard HTTP headers. The latest draft of the specification can be found here. If you have questions for this group, the mailing list and Gitter chatroom are great places to go for answers.

For black-box services, where it is not possible to install a tracer or otherwise interact with the program, a data protocol is needed to export data from the system.

Work on this data format and protocol is currently at an early stage, and mostly happening within the context of the w3c Distributed Trace Context Working Group. There is particular interest is in defining higher-level concepts, such as RPC calls, database statements, etc, in a standard data schema. This would allow tracing systems to make assumptions about what kind of data would be available. The OpenTracing project is also working on this issue, by starting to define a standard set of tags. The plan is for these two efforts to dovetail with each other.

Note that there is a middle ground available at the moment. For “network appliances” that the application developer operates, but does not want to compile or otherwise perform code modifications to, dynamic linking can help. The primary examples of this are service meshes and proxies, such as Envoy or NGINX. For this situation, an OpenTracing-compliant tracer can be compiled as a shared object, and then dynamically linked into the executable at runtime. This option is currently provided by the C++ OpenTracing API. For Java, an OpenTracing Tracer Resolver is also under development.

These solutions work well for services that support dynamic linking, and are deployed by the application developer. But in the long run, a standard data protocol may solve this problem more broadly.

Analysis system: A service for extracting insights from trace data

Last but not least, there is now a cornucopia of tracing and monitoring solutions. A list of monitoring systems known to be compatible with OpenTracing can be found here, but there are many more options out there. I would encourage you to research your options, and I hope you find the framework provided in this article to be useful when comparing options. In addition to rating monitoring systems based on their operational characteristics (not to mention whether you like the UI and features), make sure you think about the three big pieces above, their relative importance to you, and how the tracing system you are interested in provides a solution to them.

However, the reality is this: Distributed Tracing has become a necessity for monitoring modern systems. In designing the building blocks for these systems, the age-old approach—"decouple where you can"—still holds true. Cleanly decoupled components are the best way to maintain flexibility and forwards-compatibility when building a system as cross-cutting as a distributed monitoring system.

Thanks for reading! Hopefully, now when you're ready to implement tracing in your own application, you have a guide to understanding which pieces they are talking about, and how they fit together.

Want to learn more? Sign up to attend KubeCon EU in May or KubeCon North America in December.

What to read next
Tags
Cloud
Kubernetes
Ted Young 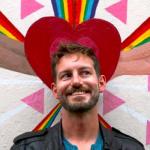 Ted Young is one of the lead maintainers of the OpenTracing project. He has been involved with OSS and distributed systems for over ten years. Previously, he worked on computer animation pipelines for VFX, national elections, and elastic compute platforms. Currently, he works at LightStep as their Director of Open Source Development.
More about me