How to reset, revert, and return to previous states in Git

Undo changes in a repository with the simplicity and elegance of Git commands.

One of the lesser understood (and appreciated) aspects of working with Git is how easy it is to get back to where you were before—that is, how easy it is to undo even major changes in a repository. In this article, we'll take a quick look at how to reset, revert, and completely return to previous states, all with the simplicity and elegance of individual Git commands.

How to reset a Git commit

Let's start with the Git command reset. Practically, you can think of it as a "rollback"—it points your local environment back to a previous commit. By "local environment," we mean your local repository, staging area, and working directory.

Take a look at Figure 1. Here we have a representation of a series of commits in Git. A branch in Git is simply a named, movable pointer to a specific commit. In this case, our branch master is a pointer to the latest commit in the chain. 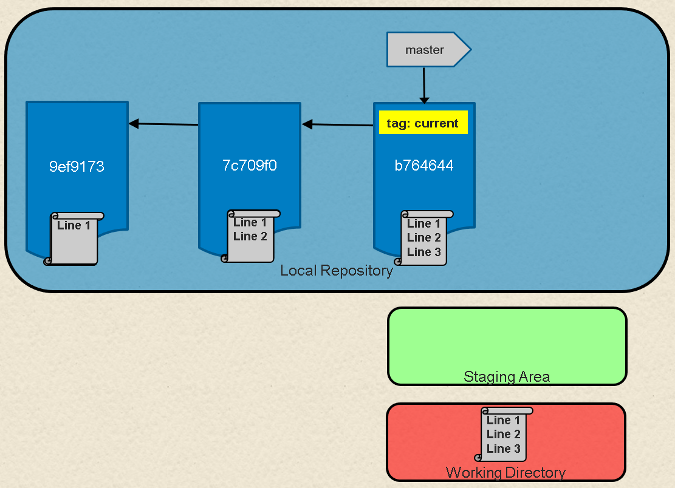 If we look at what's in our master branch now, we can see the chain of commits made so far.

What happens if we want to roll back to a previous commit. Simple—we can just move the branch pointer. Git supplies the reset command to do this for us. For example, if we want to reset master to point to the commit two back from the current commit, we could use either of the following methods:

Figure 2 shows the results of this operation. After this, if we execute a git log command on the current branch (master), we'll see just the one commit. 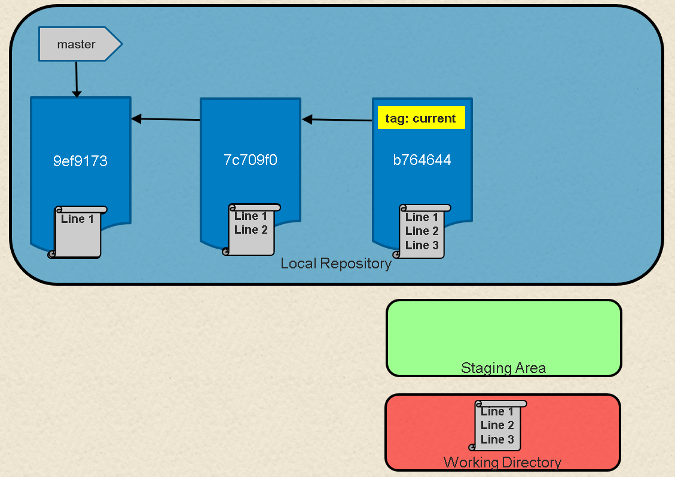 Using these options can be useful in targeted circumstances such as git reset --hard <commit sha1 | reference>. This overwrites any local changes you haven't committed. In effect, it resets (clears out) the staging area and overwrites content in the working directory with the content from the commit you reset to. Before you use the hard option, be sure that's what you really want to do, since the command overwrites any uncommitted changes.

How to revert a Git commit

The net effect of the git revert command is similar to reset, but its approach is different. Where the reset command moves the branch pointer back in the chain (typically) to "undo" changes, the revert command adds a new commit at the end of the chain to "cancel" changes. The effect is most easily seen by looking at Figure 1 again. If we add a line to a file in each commit in the chain, one way to get back to the version with only two lines is to reset to that commit, i.e., git reset HEAD~1.

Another way to end up with the two-line version is to add a new commit that has the third line removed—effectively canceling out that change. This can be done with a git revert command, such as:

Because this adds a new commit, Git will prompt for the commit message:

Figure 3 (below) shows the result after the revert operation is completed.

If we do a git log now, we'll see a new commit that reflects the contents before the previous commit.

Here are the current contents of the file in the working directory: 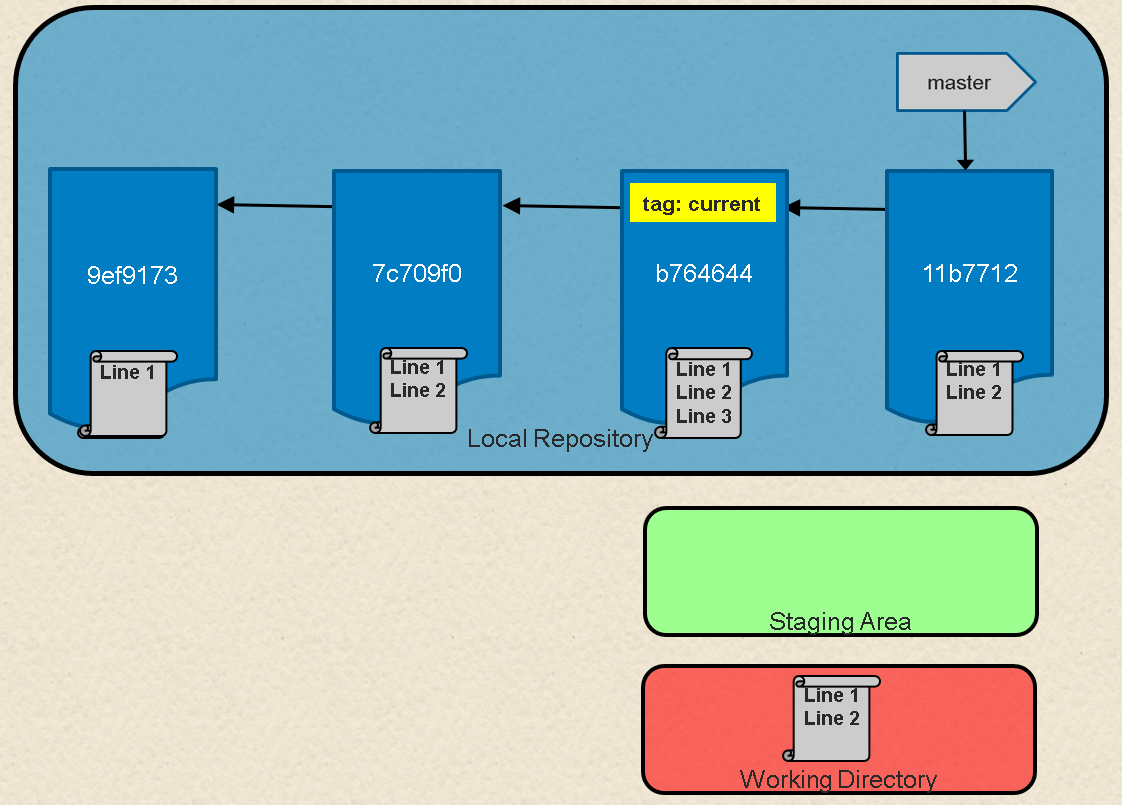 Why would you choose to do a revert over a reset operation? If you have already pushed your chain of commits to the remote repository (where others may have pulled your code and started working with it), a revert is a nicer way to cancel out changes for them. This is because the Git workflow works well for picking up additional commits at the end of a branch, but it can be challenging if a set of commits is no longer seen in the chain when someone resets the branch pointer back.

This brings us to one of the fundamental rules when working with Git in this manner: Making these kinds of changes in your local repository to code you haven't pushed yet is fine. But avoid making changes that rewrite history if the commits have already been pushed to the remote repository and others may be working with them.

In short, if you rollback, undo, or rewrite the history of a commit chain that others are working with, your colleagues may have a lot more work when they try to merge in changes based on the original chain they pulled. If you must make changes against code that has already been pushed and is being used by others, consider communicating before you make the changes and give people the chance to merge their changes first. Then they can pull a fresh copy after the infringing operation without needing to merge.

You may have noticed that the original chain of commits was still there after we did the reset. We moved the pointer and reset the code back to a previous commit, but it did not delete any commits. This means that, as long as we know the original commit we were pointing to, we can "restore" back to the previous point by simply resetting back to the original head of the branch:

A similar thing happens in most other operations we do in Git when commits are replaced. New commits are created, and the appropriate pointer is moved to the new chain. But the old chain of commits still exists. 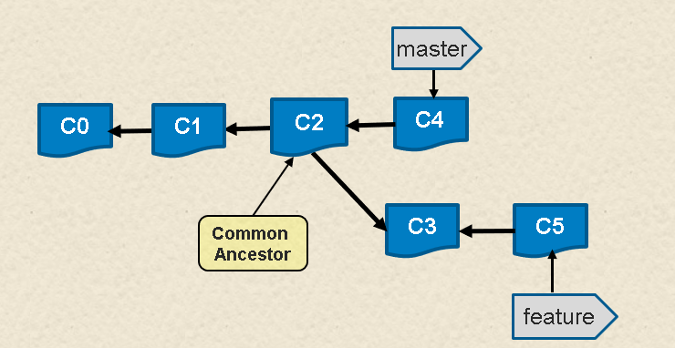 Fig. 4: Chain of commits for branches master and feature

If we look at the log of commits in the branches, they might look like the following. (The C designators for the commit messages are used to make this easier to understand.)

I tell people to think of a rebase as a "merge with history" in Git. Essentially what Git does is take each different commit in one branch and attempt to "replay" the differences onto the other branch.

So, we can rebase a feature onto master to pick up C4 (e.g., insert it into feature's chain). Using the basic Git commands, it might look like this:

Afterward, our chain of commits would look like Figure 5.

Fig. 5: Chain of commits after the rebase command

Again, looking at the log of commits, we can see the changes.

Notice that we have C3' and C5'—new commits created as a result of making the changes from the originals "on top of" the existing chain in master. But also notice that the "original" C3 and C5 are still there—they just don't have a branch pointing to them anymore.

If we did this rebase, then decided we didn't like the results and wanted to undo it, it would be as simple as:

With this simple change, our branch would now point back to the same set of commits as before the rebase operation—effectively undoing it (Figure 6).

Fig. 6: After undoing the rebase operation

What happens if you can't recall what commit a branch pointed to before an operation? Fortunately, Git again helps us out. For most operations that modify pointers in this way, Git remembers the original commit for you. In fact, it stores it in a special reference named ORIG_HEAD within the .git repository directory. That path is a file containing the most recent reference before it was modified. If we cat the file, we can see its contents.

We could use the reset command, as before, to point back to the original chain. Then the log would show this:

Another place to get this information is in the reflog. The reflog is a play-by-play listing of switches or changes to references in your local repository. To see it, you can use the git reflog command:

You can then reset to any of the items in that list using the special relative naming format you see in the log:

Once you understand that Git keeps the original chain of commits around when operations "modify" the chain, making changes in Git becomes much less scary. This is one of Git's core strengths: being able to quickly and easily try things out and undo them if they don't work. 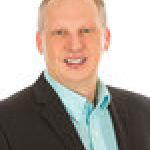 Brent Laster is a global trainer, presenter, and the author of the books Professional Git and
More about me