Like the Jedi Force, -f is powerful, potentially destructive, and very helpful when you know how to use it. 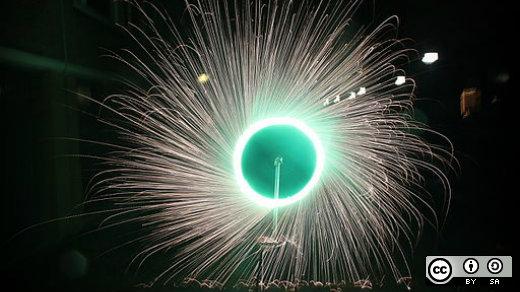 Sometime in recent history, sci-fi nerds began an annual celebration of everything Star Wars on May the 4th, a pun on the Jedi blessing, "May the Force be with you." Although most Linux users are probably not Jedi, they still have ways to use the force. Of course, the movie might not have been quite as exciting if Yoda simply told Luke to type man X-Wing fighter or man force. Or if he'd said, "RTFM" (Read the Force Manual, of course).

More Linux resources
Many Linux commands have an -f option, which stands for, you guessed it, force! Sometimes when you execute a command, it fails or prompts you for additional input. This may be an effort to protect the files you are trying to change or inform the user that a device is busy or a file already exists.

If you don't want to be bothered by prompts or don't care about errors, use the force!

Be aware that using a command's force option to override these protections is, generally, destructive. Therefore, the user needs to pay close attention and be sure that they know what they are doing. Using the force can have consequences!

Following are four Linux commands with a force option and a brief description of how and why you might want to use it.

The cp command is short for copy—it's used to copy (or duplicate) a file or directory. The man page describes the force option for cp as:

This example is for when you are working with read-only files:

If you want to copy a file called Hoth to Naboo, the cp command will not allow it since Naboo is read-only:

But by using the force, cp will not prompt. The contents and permissions of Hoth will immediately be copied to Naboo:

Oh no! I hope they have winter gear on Naboo.

The ln command is used to make links between files. The man page describes the force option for ln as:

Suppose Princess Leia is maintaining a Java application server and she has a directory where all Java versions are stored. Here is an example:

As you can see, there are several versions of the Java Development Kit (JDK) and a symbolic link pointing to the latest one. She uses a script with the following commands to install new JDK versions. However, it won't work without a force option or unless the root user runs it:

The tar command will extract the .gz file to the specified directory, but the ln command will fail to upgrade the link because one already exists. The result will be that the link no longer points to the latest JDK:

She can force ln to update the link correctly by passing the force option and one other, -n. The -n is needed because the link points to a directory. Now, the link again points to the latest JDK:

A Java application can be configured to find the JDK with the path /usr/lib/java/jdk instead of having to change it every time Java is updated.

The rm command is short for "remove" (which we often call delete, since some other operating systems have a del command for this action). The man page describes the force option for rm as:

If you try to delete a read-only file, you will be prompted by rm:

You must type either y or n to answer the prompt and allow the rm command to proceed. If you use the force option, rm will not prompt you and will immediately delete the file:

The most common use of force with rm is to delete a directory. The -r (recursive) option tells rm to remove a directory. When combined with the force option, it will remove the directory and all its contents without prompting.

The rm command with certain options can be disastrous. Over the years, online forums have filled with jokes and horror stories of users completely wiping their systems. This notorious usage is rm -rf *. This will immediately delete all files and directories without any prompt wherever it is used.

The userdel command is short for user delete, which will delete a user. The man page describes the force option for userdel as:

When Obi-Wan reached the castle on Mustafar, he knew what had to be done. He had to delete Darth's user account—but Darth was still logged in.

Since Darth is currently logged in, Obi-Wan has to use the force option to userdel. This will delete the user account even though it's logged in.

As you can see, the finger and ps commands confirm the user Darth has been deleted.

Many other commands have a force option. One place force is very useful is in shell scripts. Since we use scripts in cron jobs and other automated operations, avoiding any prompts is crucial, or else these automated processes will not complete.

I hope the four examples I shared above help you understand how certain circumstances may require the use of force. You should have a strong understanding of the force option when used at the command line or in creating automation scripts. It's misuse can have devastating effects—sometimes across your infrastructure, and not only on a single machine.

I really like your article! Use the force wisely. :)

It is really good to know about such options in almost every basic tool. But the is one more serious drawback in case if you need to use such an option. If you do then it means that you have missed something before. And I would recommend to learn how to avoid such situations in first place.

Victor, this is true and recommended. This is why I repeat that the user should be very sure about what they are doing.