Linux offers plenty of great options for a work/play combo or a full gaming console setup. Take our poll to tell us your favorite.

Gaming on Linux got a thorough kickstart in 2013 when Valve announced that their own SteamOS would be written on top of Linux. Since then, Linux users could realistically expect to play high-grade games that, in the past, required the purchase of a Windows computer or gaming console. The experience got off to a modest start, with just a few brave companies like CD Projekt Red, Deep Silver, Valve itself, and others putting the Linux penguin icon in their compatibility list, but eventually, even Gearbox and Square Enix were releasing their biggest titles on Linux. Today, Valve's Proton project helps ensure that even titles with no formal Linux release still work on SteamOS and other Linux distributions.

Valve didn't singlehandedly drag gaming into Linux, though. Well before Valve's initiative, there have been excellent independent games, blockbusters from id Software, and open source gaming emulators for Linux. Whether you want to play the latest releases or you want to relive classics from gaming history, Linux provides the only open source platform for your game rig. Here's an overview of what you might consider running on it. 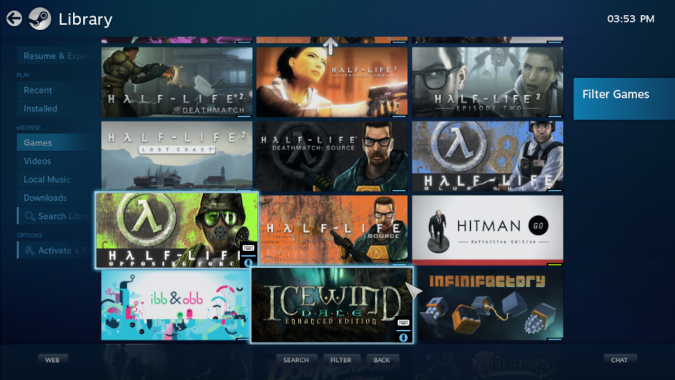 If you're looking for the full gaming PC experience—in which there's no difference between your desktop computer and a game console—then SteamOS is the obvious choice. On the one hand, there's nothing particularly special about SteamOS; it's essentially just Debian Linux with Steam set as the default startup application. When you boot your computer, Steam starts automatically, and you can interact with it using only your Steam controller or any Xbox-style gamepad. You can create the same configuration by installing Steam on any distribution and setting its "Big Picture mode" as a startup item.

However, SteamOS is ultimately specific to its purpose as a game console. While you can treat SteamOS as a normal desktop, the design choices of the distribution make it clear that it's intended as the frontend to a dedicated gaming machine. This isn't the distribution you're likely to use for your daily office or schoolwork. It's the "firmware" (except it's actually software) of a gaming console, first and foremost. When you're looking for a seamless, reliable, self-maintaining game console, build the machine of your dreams and install SteamOS. 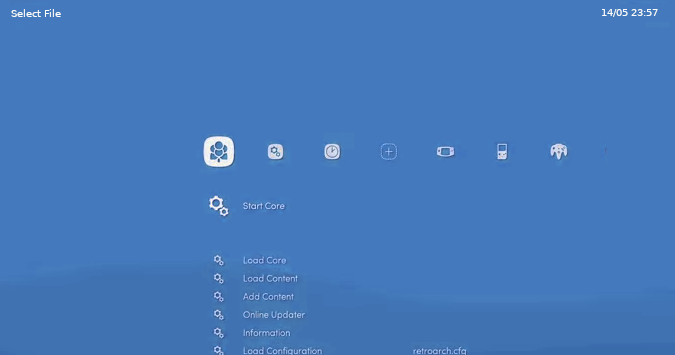 More Linux resources
Similar in spirit to SteamOS, Lakka recreates the Playstation 3 interface, but for retro gaming. I installed Lakka on a Raspberry Pi Rev 1 using Etcher and was pleasantly surprised to find it ready for gaming upon bootup. Lakka loads to an interface that's eerily familiar to PS3 gamers, and, like a Playstation, you can control everything using just a game controller.

Lakka focuses on retro gaming, meaning that, instead of Steam, it provides game emulators for old systems and engines. Provided you have ROM images, you can use the emulators to play games from Nintendo, Sega Genesis, Dreamcast, N64, or homebrew titles like POWDER, Warcraft Tower Defense, and others.

Lakka doesn't ship with any games, but it makes it easy for you to add games over SSH or Samba shares. Even if you've never used SSH or set up Samba (you've probably used it without knowing it), Lakka makes it easy to find your retro gaming system over your own network, so you can add games to it using whatever OS you have handy. 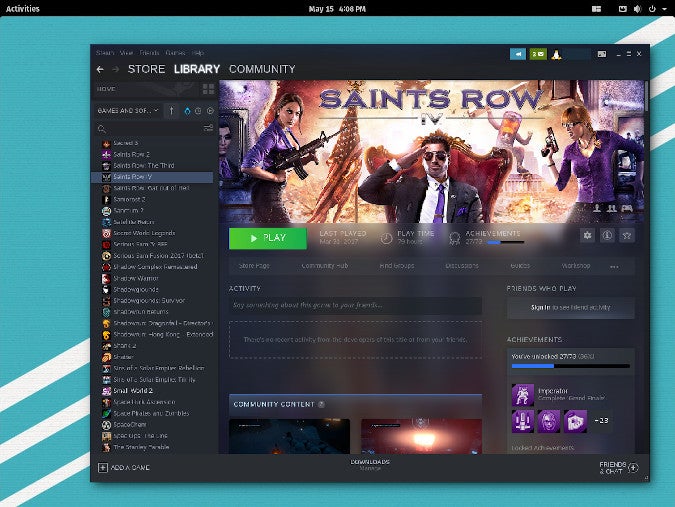 Not everyone is trying to build a game console—modern, retro, or otherwise. Sometimes, all you really want is a good computer with the ability to run games at top performance. System76 maintains a desktop they call Pop_OS!, designed around the standard GNOME desktop with some custom additions. Pop_OS! doesn't do much by way of innovation, but it makes an impact in the way its designers maintain convenient defaults. For gamers, this includes easy access to Steam, Proton, WINE, game emulators, PlayOnLinux, automatic game controller recognition and configuration, and more. It's not far from its Ubuntu roots, but it has been refined just enough to make a noticeable difference.

When you're not playing games, Pop_OS! is also a wonderful productivity-focused desktop. It uses all of GNOME's built-in conveniences (such as the quick Activities menu overlay) to maximize efficiency, and adds useful modifications to bring the desktop closer to the universal expectation that's grown from decades of traditions founded in KDE Plasma, Finder, and Explorer. Pop_OS! is an intuitive and understated environment that helps you focus on whatever you're working on, until you break out the gaming gear, and then it makes sure you spend your time on entertainment instead of configuration. 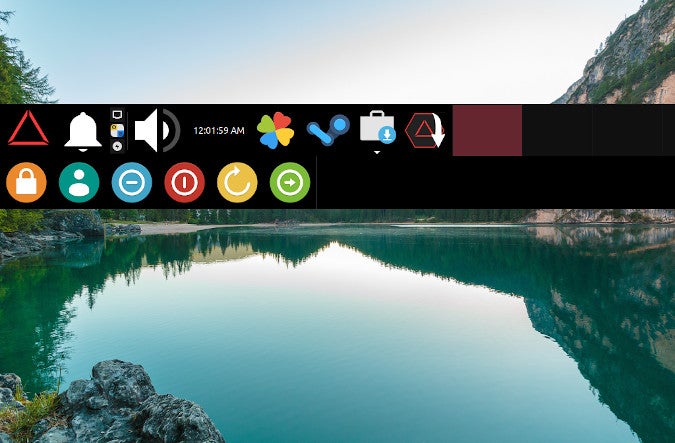 Situated somewhere between a dedicated gaming console and a plain old desktop is Drauger OS, with a simple interface designed to stay out of your way while also making it quick and easy to access the game applications you need. Drauger is still a young project, but it represents an interesting philosophy of computing and gaming—conserve every last resource for the task at hand. To that end, Drauger OS does away with the concept of a traditional desktop and instead provides a simplified control panel that lets you launch your game client (such as Steam, PlayOnLinux, Lutris, and so on), and configure services (such as your network) or launch an application. It's a little disorienting at first, especially because the control panel is designed to more or less disappear when in the background, but after an afternoon of interaction, you realize that the complexity of a full desktop is mostly unnecessary. The point of any computer is rarely its desktop. What you really care about is getting into an application as quickly and easily as possible, and then for that application to perform well.

The other side of this equation is performance. While having a drastically simplified desktop helps, Drauger OS attempts to maximize game performance by using a low-latency kernel. A kernel is the part of your operating system that communicates with external devices, such as game controllers and mice and keyboards, and even hard drives, memory, and video cards. An all-purpose kernel, such as the one that ships with most Linux distributions, gives more or less equal attention to all processes. A low-latency kernel can favor specific processes, including video and graphics, to ensure that calculations performed for important tasks are returned promptly, while mundane system tasks are assigned less importance. Drauger's Linux kernel is tuned for performance, so your games get top priority over all other processes.

The Linux of your choice 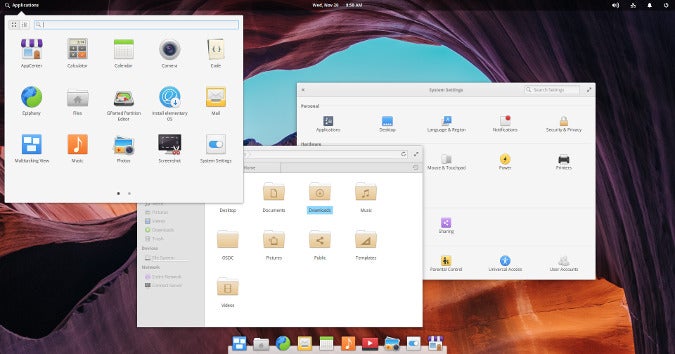 Looking past the self-declared focal points of individual "gaming distributions," one Linux is ultimately essentially the same as the next Linux. Amazingly, I play games even on my RHEL laptop, a distribution famous for its enterprise IT support, thanks to the Flatpak Steam installer. If you want to game on Linux in this decade, your question isn't how to do it but which system to use.

The easiest answer to which Linux to use is, ultimately, to choose whatever Linux works best on your hardware. When you find a Linux distribution that boots and recognizes your computer hardware, your game controllers, and lets you play your games. Once you find that, install the games of your choice and get busy playing.

There are more great Linux distributions for gaming out there, including the Fedora Games Spin, RetroPie, Clear Linux, Manjaro, and so many more. What's your favorite? Tell us in the comments.

These games are fun and free to play, a way to connect with friends, and an opportunity to make an old favorite even better.
Aman Gaur

I switched from Windows 10 to Linux Mint Debian Edition and so far gaming has been decent besides a few minor hiccups that I am blaming on Nvidia.

I use Fedora 32 workstation.

Kushagra Karira on 28 May 2020 Permalink

Fedora for me too.

Jorge Cabicieri on 28 May 2020 Permalink

Calgary Homes For Sale on 28 May 2020 Permalink

I use Arch btw

Anthony Eremondi on 28 May 2020 Permalink

I use Arch, btw

Andrew Whiteman on 28 May 2020 Permalink

ZORIN OS Ultimate for gaming and all the tasks

Solus all the way!

Actually i think you can install steam on all linux distribution and play your favorite game. I have no problem with it on my ubuntu.

For me stock Ubuntu works best. For my own needs, there is no need for a gaming distro because I can install the relevant packages and apps myself.

Well, if I go techy. Android is my fav for gaming

I have yet to find a distro that CAN run non-native platform games.

I use artix for gaming, the AUR provides basically every package you need.

Desmond ainsworth on 29 May 2020 Permalink

I use devuab beowulf, I've customised it ready for gaming.

I made it so it could boot up from dvd too using one of those remastersys clones.

Boots up a treat.

Went from an fx system to ryzen 2700x system and it boots grand.

Even jazzed up the boot menu with grub customizer, shame that border is hard coded in.

Lubuntu/lxde because I want to run games, not a Distro. lxde leaves my resourses free to run games.

Another great option is GamerOS. In a nutshell, it's a hybrid between SteamOS and Arch Linux. It has a great interface, outstanding use of the rolling release build and its own built-in ROM/emulator to steam integration complete with auto gamepad mapping.

I use Arch btw

I switched back to windows 10 for gaming. Proton has potential but I find it requires more tinkering and it struggles with some of my favourite titles like Ark. The anti cheat system doesn't work with proton so that leaves me to play on unofficial servers and the game feels laggy. Its best to wait for cross platform development and a complete departure from openGL. I myself do open source development using dotnet core and I see a future where linux plays a good part but not right now with gaming. By that I mean zero config gaming. Boot and play.

Ultimately, it depends on the game. Unfortunately, system exclusives are alive and well even in modern gaming.