How I play Tetris on the mainframe

Here's how I compiled and play my favorite game on a mainframe by accessing a virtual Linux server.

The ability to run Linux on modern mainframes opens doors to doing all kinds of things on the platform. An Apache HTTP server? Easy! A database? Would you like SQL or NoSQL? Kubernetes? Sure! As I concluded in Linux on the mainframe: Then and now, all of the most popular Linux distributions for servers today have versions for the mainframe.

This is great news for companies whose mission-critical infrastructures are running on a mainframe, but what if you just want to play around with one? The first time I got a bash shell on an IBM LinuxONE, I installed the irssi chat client and showed all my friends on IRC the output of /proc/cpuinfo to show off that it was an s390x architecture system. At first, I was at a loss as to what to do next.

Then I thought it would be fun to use this huge computer to play a game. My first thought was NetHack, but it turns out I could install that with a simple apt install nethack-console. No, I should compile something! For every computer architecture, you need compilers and interpreters written for that. With over 20 years of Linux on the mainframe, most compilers and interpreters you'd typically expect are already ported.

Growing up, one of my all-time favorite games was Tetris, so it was the logical choice for my experimentation. I found an open source Tetris game written in C called vitetris and gave it a try. It was just like compiling a C program on any other Linux server.

First, I needed to grab some dependencies. The mainframe was running Linux, so I could use my package manager to install the build requirements, and I was well on my way.

Next, it was just a matter of grabbing the code and building it:

And in no time, I was playing my favorite game! 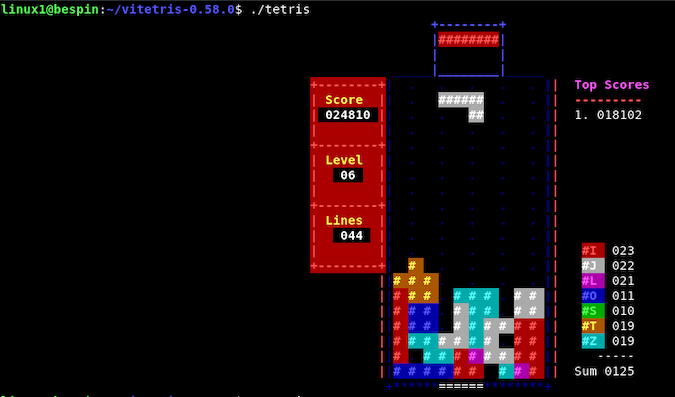 As I said, it's exactly like building any other C program on a Linux server, but you're doing it on a mainframe.

Unfortunately, I don't have a mainframe in my garage (yet). Instead, I've done all of this on a virtual server hosted by Marist College through the IBM LinuxONE Community Cloud program. It gives you free access to an s390x architecture Linux server, with your choice of the most popular distributions. With this virtual server, you have access to experiment for 120 days.

If you are a representative from an open source project that is considering building your application for Linux on s390x, there's a program for you, too. When I'm not playing Tetris, my actual job at IBM is working with open source communities to do just that. You can put in a request for a permanent Linux virtual server for your community to use for development, whether that's doing manual tests to see if your application will build or formally adding it to your project's continuous integration system. I recommend starting with the Community Cloud to do some experiments, and then you can fill out this form to get the process of getting a permanent virtual server rolling.

Linux on the mainframe: Then and now

It's been two decades since IBM got onboard with Linux on the mainframe. Here's what happened.