A wall of synth. That's what I dream of. Given the chance, on one wall of my office, I'd have a modular synthesizer that only Bob Moog himself could truly ever understand. Until I realize this dream, I make do with a very good approximation: Zyn-Fusion. 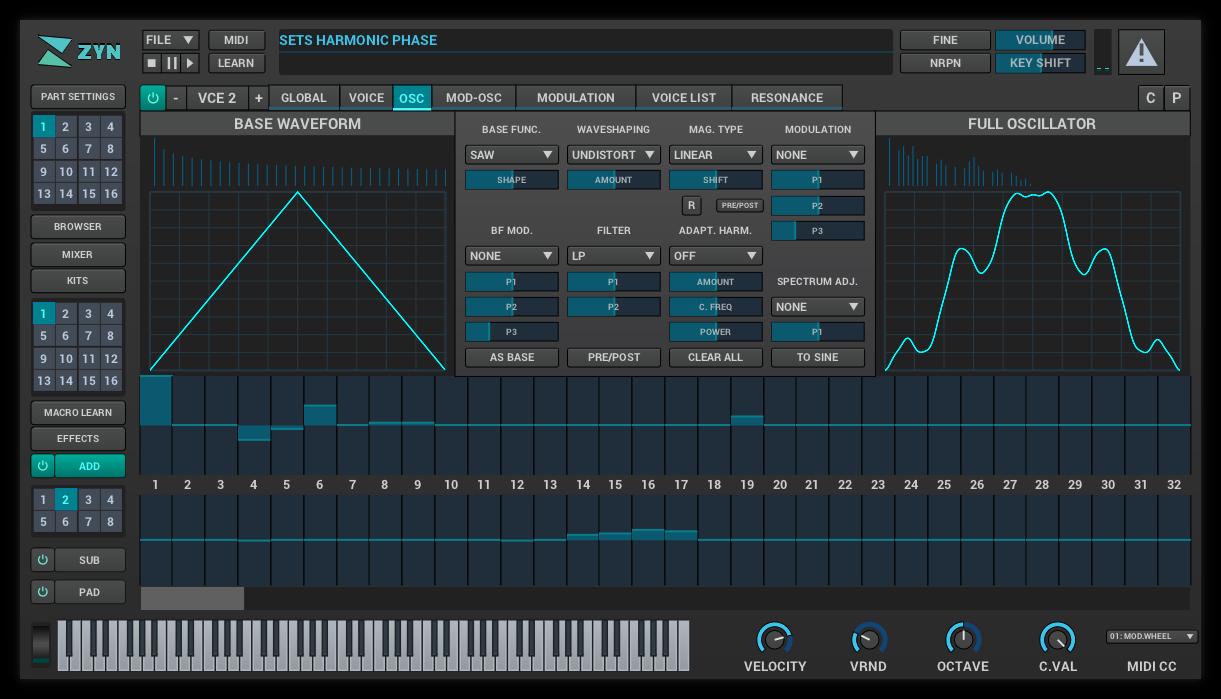 Zyn-Fusion is the evolution of the ZynAddSubFX synthesizer, the modular soft synth that's got so many oscillators, oscilloscopes, filters, effects, presets, and knobs that you'll wonder how there were any left for all the other great open source synths out there. Whether you've got musical skill or not, if you want to make electronic noise, you can do it with Zyn-Fusion. You don't need to know what you're doing or why you're doing it to make otherworldly soundtracks. Here's how I musically enhance my workday, and you can do it, too.

Modular synths are made of different components. While Zyn-Fusion bundles a lot into its interface, there are still a few things you need to install.

On Linux, you may find Zyn-Fusion in your software repository, or if you want to support the project you can pay for it.

It's open source, so you can also download and compile its source code.

You must also install JACK, which is available from your software repository.

First, identify your audio output using aplay. Depending on your computer, the output you see might be very simple or very complex, and because you're looking at raw system information, it's likely that you won't recognize all of the names and terms you see. It only looks complex, though:

Look through the output and think about each card. Don't worry about repeats, just establish what card represents your hardware. For example, I've got HDMI outputs that I don't use on my graphics card, and I have a Plantronics USB headset attached, but I only use that for voice calls. I want my synth to play through my speakers or headphones.

Through the process of elimination, I know that the Generic device is the sound card built into my motherboard. The way Linux refers to this device is hw:1 because it's card 1. My gaming headset is hw:2, and the digital output of my NVidia card is hw:0.

And finally, start your synth with the --auto-connect option to ensure that it attaches to JACK:

If you're using a MIDI keyboard (the one like a piano, not QWERTY), you can connect it to Zyn-Fusion using the aconnect command. First, identify MIDI inputs:

In this example, client 32 is the USB keyboard I've got plugged into my computer.

Next, identify applications on the system that can accept MIDI input:

In this example, client 129 is ZynAddSubFX.

Press a key on your MIDI keyboard to hear Zyn-Fusion's default patch.

To activate one of the modes, click the Power button to the left of the mode.

To enter a mode's editing screen, click the mode button itself.

Additive synthesis combines oscillators, each with its own waveform, to build a sound. An oscillator, in soft synths, is an emulated electronic circuit that produces a basic waveform, such as a sine wave, square, or saw. Zyn-Fusion also refers to an oscillator as a voice or vce for short. You can have up to eight voices in any sound you're designing.

Zyn-Fusion interface displays the current voice that's active in two places. It shows up as an array of buttons in the left panel:

It's also displayed as a combo-box with the tabs of the Add editing panel. 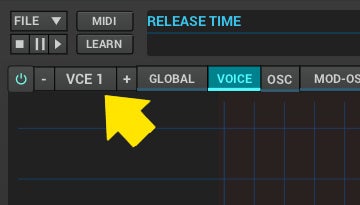 Each oscillator in Zyn-Fusion has its own envelope filter, which controls four attributes (commonly abbreviated as ADSR) of the waveform: the sharpness of its attack, how quickly the sound decays, how long the waveform is sustained, and how quickly it falls off after it's released.

There are dozens of other filters for each oscillator available in the Add panel, so click all of the tabs, turn all of the dials and knobs, draw new patterns to define resonance, change the shape of soundwaves, and combine oscillators through modulators until you re-invent white noise.

Additive synthesis is fun because the more oscillators you add, the more your sound changes. In stark contrast, subtractive synthesis is just you and one soundwave. You have filters, such as envelope settings, amplitude, harmonics, and bandwidth, and with those, you truly sculpt the soundwave into a form you like. It can be difficult to know what exactly to sculpt, at first, especially if you're not used to looking at a soundwave and translating its visual form into a template for audio. However, after sufficient experimentation, you develop not just a sense for what you're doing but comprehension.

If you want to understand the components of a synthesis, start with subtractive synthesis. It's raw and maybe overwhelming, but it's very powerful when you know exactly the sound you want to hear and just need a tool to help you carve it out of an oscillator's output.

The Pad panel contains complex filters and effects you can use to alter the characteristics of a voice. Using a combination of adjustments to the oscillator and samples to create a harmonic profile, the pad editor lets you create a consistent soundscape worthy of the term synth pad.

Sculpting soundwaves is fun, but there's a place for instant gratification, too. I haven't counted them all, but Zyn-Fusion comes with at least 100 patches ready to play. Click the Preset button in the left panel to see them. 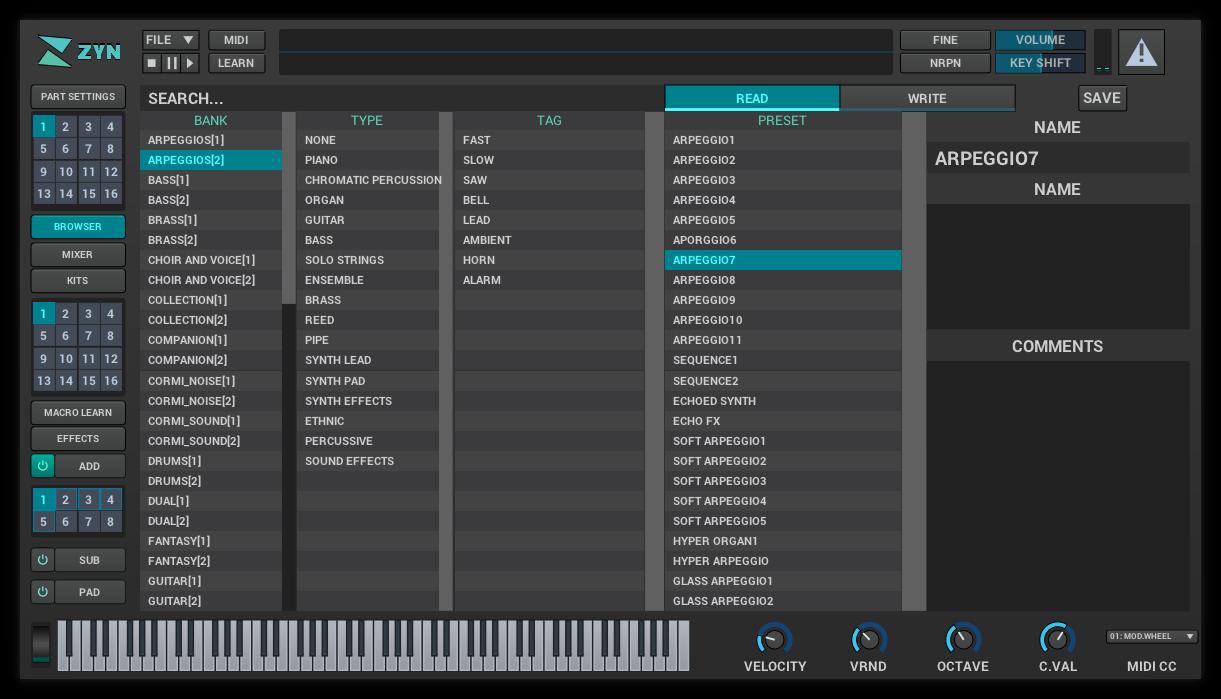 The browser uses a filter system to help you find the types of sounds you're looking for. The leftmost column contains patch banks contributed by Zyn-Fusion users, while the middle two columns filter by type and tag. In the right column are the patches contained in the selected patch bank. Until you're used to the presets available, ignore the middle two columns and just browse the unfiltered lists in the left and right columns. There's a lot to choose from, and you can easily spend half a year exploring these patches.

Peace and quiet are nice for a while, but sometimes you just have to make some noise. Zyn-Fusion is a classic open source synth with a modern interface. With so many different ways to create new sounds and discover great patches, Zyn-Fusion is one of the truly great soft synths. Download it, and lose a few days to it. You won't regret it.