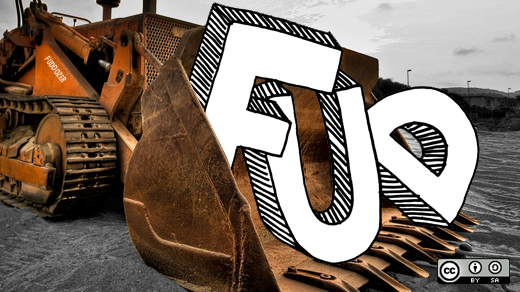 If there's one thing business leaders can learn from open source developers, it's when you begin disrupting the comfortable ways that people do business, you'll experience the power of FUD—Fear, Uncertainty, and Doubt. And your ideas, in all their brilliant, open-minded glory, will be the target.

Open source software developers have heard it all. Open source is risky. It will destroy your profitability. It will turn you into a communist. Worthy of inclusion on an international watchlist. And you should probably be quarantined.

So if you're facing opposition to bringing the open source way to your organization, find an established open source community and ask what has worked for them—and what hasn't.

Drupal developer Bryan Ollendyke likes to point to successful implementations of Drupal, like Penn State or the White House. This is an excellent strategy for silencing the nay-sayers. Arm yourself with examples of respected companies who embody the open source way.

Rob Weir of the OpenDocument Format looks carefully at the lies and half-truths and then formulates a concise response that sets the record straight. It's hard to argue with facts.

When dealing with FUD, it will be tempting to launch a full scale counter-attack. But you risk your integrity when you counter with more FUD.

Ultimately, the most effective solution to the FUD problem is to focus on driving forward the project that's facing the opposition. Success is more than just the best revenge—it wins you a broader audience and a bigger platform for advocating change.

and it's scaring the powers that be into mounting a campaign against your ideas.

Keep the focus of the arguments to what effects THEM and how it will benefit THEM. You could try and sell them something that brings world peace, cures cancer and puts hair on bald men, but if the powers-to-be don't see a benefit for them it's dead on arrival!

To convert/move over anything to Open Source is going to take manpower and time. So that is the minimum cost that has to be overcome before even trying to argue about the benefits.

Once you have the "cost" overcome and the benefits outweigh the price of implementation then is the more delicate minefield to navigate: emotions. People don't like changing so this is arguably the more difficult sell.

Overcoming the cost is just the ante-up, wooing over the emotional side is the poker play!