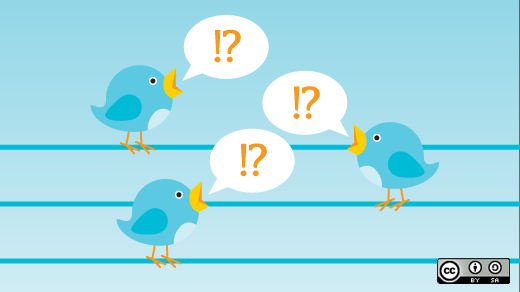 Twitter offers customer service access on problems that you couldn't have reached before: the little things. (I've heard they count.) There's a huge opportunity for companies to interact with their customers in a way they haven't before, but a lot of them are still ignoring it. Or worse, they think they're using it, but they're completely missing the point.

It's not unusual to write a letter to a company that has especially displeased you, or even occasionally to one that went above and beyond in a good way. No company has trouble finding truly irate customers. But what about the odd things here and there that might be easy to fix but aren't worth a customer writing a letter or making a phone call? In BT times, your company might never have heard about them. But by effectively tapping into the Twitter stream, you now have access to a much wider view into your customers' satisfaction.

Even as little as six months to a year ago, my rare interactions with corporate Twitter accounts brought one thought to mind:

They were generally self-promoting bots with no interaction. Tweets directed at them went into a black hole. And the worst--following them resulted in auto-reply DMs that all said, "Thanks for the follow! Buy this cool thing! http://short.irrelevant.url" or something equally generic.

Over the last few months, I've noticed that more companies are joining the AT times and really changing how they see customers and how customers see them. I've been experimenting with it through my own Twitter account as a consumer by periodically tweeting at companies I've interacted with. Here's how they did, from best to worst:

I have to give EventBrite the Doing Twitter Right award since I didn't even send a message naming their Twitter account. I tried to tap into the #sxsw hashtag stream for information instead:

#sxsw noob question: Seems like people RSVP to a thousand things on EventBrite. Do you really have to print and carry all those tickets?

Someone at EventBrite is doing exactly what they should--watching the Twitter stream not just for messages directed at them, but for messages that mention EventBrite. I shortly received a reply from @EventBriteHelp:

@suehle Hey Ruth, entry policy depends on host, but they have option to disable PDF tix: http://cot.ag/h6a1LL U can email host to ask.

The next message told me where to find the host's email address. I replied "thanks," and they replied, "no problem." Just like a real conversation with a real person, which is the way it should be.

I give @lapetiteacademy high marks because they didn't just reply to my original tweet--they got personal. Oddly enough, my initial impression of this child care company had been a very impersonal one--after I emailed a local center asking about a tour, I got a call back from a national number, not the local one. Post-tour, I tweeted:

@lapetiteacademy handbook says no personal items of value, like books, allowed. But iPods and gaming devices are OK with permission. Wha?

Their reply suggests to me that said handbook was hastily updated without much attention to changing technology:

@suehle All personal items may be allowed if approved (due to risk of loss or damage). Call 800-Lapetite for more info. Thanks for asking!

Then about a day later, I got this message:

@suehle By the way, we love your Hobby Hobby blog! You’re so crafty—the robots are great and you’ve got a lot of fun ideas!

We subsequently exchanged a few more tweets, and the result was that a company I had felt was rather impersonal got a lot more personal.

A few months ago, I was interested in a conference that was held by and advertised in Fast Company magazine. But when I went to the conference site, it still had 2010 registration information. The tweet:

@fastcompany Will mostcreativepeople.com be getting updated for 2011?

They quickly replied, "@suehle No doubt! Stay tuned for updates very soon. Thanks for reading!" But the real bonus points came about two weeks later when they replied again to let me know that the update had actually gone live:

@suehle Remember that update you asked for?? Here you go! http://mostcreativepeople.com/ Registration is now open. Get'em while they're hot!

It would be easy to reply-and-forget, so I really appreciated the second message.

Each year I buy one of those books of local coupons that neighborhood kids sell as fundraisers. One year my family had three different such books. We would often go to a new place to use a coupon from one of the books only to find they'd gone out of business. It was so common that we started calling ahead to places we didn't know just to check. This past weekend, it happened again. I tweeted:

I think @bestcouponsent (the Entertainment book) is cursed. We're forever showing up at a place in it to find they've gone out of business.

This was one where I didn't even expect a reply. There's not much they can do once the book's been printed, and they're not likely to tweet out, "Ha ha! Yeah, we're definitely cursing our clients." But they did reply:

@suehle Sorry for the inconvenience, Ruth! We try to remove those before printing. You can report those merchants here http://greatde.al/0rA

I don't think I'm the only one who didn't know, since there are no out-of-business places listed on that page, but I promptly reported my most recent find to get it started. I also appreciated this reply because, like EventBrite, they even used my name rather than just my Twitter handle.

I see geographically appropriate Groupons in my email and on their website. My phone is a different story. I tweeted:

My @Groupon profile has my correct zip code. But on my phone, it just shows me Philadelphia offers. How do I convince it I'm 4 states away?

I like that @MarriottIntl emails your receipt. But it doesn't help expense report filing when it doesn't come until a month after the stay.

A friendly reply agreed with me that this is a problem and offered to look into it. Thumbs up.

This one was a two-fer:

Taco Bell didn't necessarily have much to reply to here, unless it was to tell me that it's just been too long since I visited, and they introduced cups that crush at barely a touch ages ago. @RaleighGoGreen, however, which tweets about recycling in the city, could have answered the question. They eventually did, but it had been so long, I'd almost forgotten why they would be tweeting at me.

I confess a weakness for the Italian Herb and Cheese bread at Subway, so I've had chances to tweet them twice recently. They unintentionally were both environmentally related messages:

@subwayfreshbuzz Why a plastic bag for everyone? I can carry a sandwich five feet to a chair without wasting a bag.

@subwayfreshbuzz napkins ask you to recycle them. But the restaurant doesn't have a recycling bin, and you can't really recycle them anyway

No reply at all though.

Being authentic with your customers

Overall I've found this to be an interesting spectrum for how well companies are tapping into the transparency opportunity. But on top of that, there's also a spectrum of how authentic to their brands and authentic as voices the companies are--for example, the way some of them addressed me by name rather than handle, or the way Caribou's questions connect to its "stay awake" messaging.

Several others are setting the bar pretty high for authenticity. For example:

I also have to give an honorary mention to @CarnivalCruise. They're doing a good job of that customer service/fun banter use of Twitter, but what makes it even better is that according to the blog of John Heald, senior cruise director, that's how you connect with the "beards." Unfortunately John's not on Twitter, but you can follow him on Facebook for a real exercise in showing an authentic self. He posts things your company probably never imagined its most public-facing employees writing, from his bowel habits to complaints about rude guests on board--as well as help for the friendlier customers.

The simplest way to start talking to your followers is to ask a question. Then it's on you to figure out what you do with your newfound conversations.

Caribou Coffee (@caribou_coffee) frequently asks simple questions like what drink you're looking forward to that day, which fits in well with their "What do you stay awake for?" campaign. However, they seldom interact with their followers on Twitter. They do a better job on Facebook, where customers appear to have even been able to make a change. Several months ago, they posted that you would get 50 cents off coffee if you brought in a reusable Caribou mug. Customers replied in droves, "Why not ANY resuable mug?!" Indeed, the program now gives you a discount for any reusable mug. Time to bring those social media lessons over to the little blue bird.

In contrast, I've found a high degree of interaction from companies that I use for embroidery supplies and designs, in particular @MelcoUSA and @urbanthreads. When these folks ask questions, they actually reply to your answers, even throwing in the occasional, "Have a great Wednesday!" type message--general niceties that make it seem like an answer from a real person who's actually interested.

And that's the key

Make your corporate Twitter account seem like a person. That's the lesson. None of these examples involved any dramatic customer service problem that I would bother writing a letter for. They're the type of customer feedback that used to be behind a door, difficult to access. Twitter knocked down the door and installed a window. It's up to you to decide whether to open the window or draw the shades.