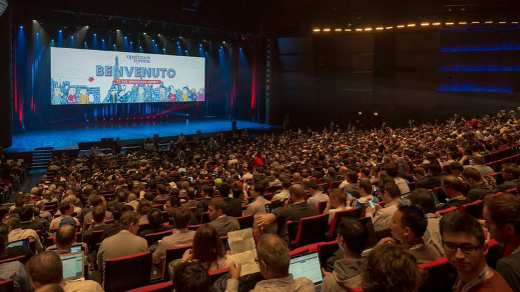 The first days of the OpenStack Summit in Paris have provided some amazing opportunities to learn about how in just four years OpenStack has gone from humble beginnings as a joint project between a single company and a government agency, and a cloud powerhouse now backending some of the most advanced IT infrastructures in the world while growing every day.

This week, over 4,600 OpenStack users and developers are descending upon the Palais des Congrès, breaking the record attendance set at the last OpenStack Summit in Atlanta. After OpenStack Foundation board and technical committee meetings on Sunday, day one opened with keynotes from foundation staff and major users from companies using OpenStack in the field in industries from automotive to banking to communications.

Kicking things off was OpenStack release manager Thierry Carrez, a Paris native, who welcomed attendees to the city. The first OpenStack Summit in Europe, the Paris Summit is being attended by a 48% European audience compared to only 9% at the last summit in Atlanta. This also meant that Americans in attendance were down 57% since the last summit, a stat which we were jokingly invited to take for what we will.

OpenStack Foundation Executive Director Jonathan Bryce gave the first keynote, setting the stage for the rest of the day with a theme: "passive consumption in IT is dead." The new IT paradigm is all about the user, and users demand fast above all else; waiting for new bare metal hardware to be approved, purchased, delivered, and installed is no longer a viable option. And those users demand choice on the resources they are allocated. The old model has been replaced, now that there is an "expectation you can get the resources you want, when you want them, configured the way you want."

And it's open source and open innovation that's powering that change. "Innovation no longer takes place in large institutions with proprietary models. It now happens with thousands of people working together from hundreds of companies in dozens of countries.”

The only open source project which has ever seen the scale and speed at which vendors worked together to create solutions for customers is the Linux kernel itself, and Linux Foundation Executive Director Jim Zemlin, who further extolled the importance of open source to the OpenStack project. "There’s too much software to be written for any one company to write it," Zemlin said. "Richard Stallman was right: sharing matters."

Back at the keynotes, we heard three great user stories including BBVA Bank, who are using OpenStack to handle IT operations in Spain, and Time Warner Cable, who are working with OpenStack provide self-service virtual machines for its developers as they look forward to potential future uses, which may include using the cloud as a replacement for traditional set-top boxes. But the biggest splash undoubtedly came from BMW, whose keynote was preceded by OpenStack Chief Operations Officer Mark Collier driving the company's i8 supercar onto the stage. BMW's Dr. Stefan Lenz reiterated the importance of OpenStack as a provider of battle-hardened infrastructure, as "every sixty seconds IT doesn't run, a car isn't built." BMW turned to OpenStack as a replacement for a previous in-house solution. "We want to build cars, not software," Lenz shared.

Finally, we saw the announcement of the very first OpenStack Superuser award, which was given to CERN. CERN, who we previously profiled through infrastructure lead Tim Bell, is using OpenStack to power several research clouds, the largest of which contains over 70,000 cores.

The Summit continues through Friday. Stay tuned for more updates as we continue to explore the vendor marketplace, attend technical sessions, watch live demos, and speak with some of the experts behind the software.

The OpenStack Foundation released a short video to snapshot some of the themes and visuals from the first day of the Summit. Take a look for quick snapshot of what's going on.

What to read next
Tags
Business
OpenStack
Cloud
Jason B