What it takes to lead at Red Hat 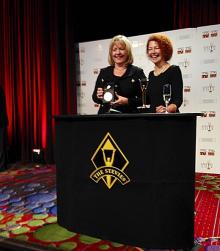 Recently, they were both honored at the Stevie Awards for Women in Business.

I caught up with them to learn more about their stories: how their careers led them to leadership positions in the software industry and what it takes to lead engineers at a company like Red Hat.

People and their problems

Denise began her career graduating at the age of twenty-one during a struggling economy. Her first experience working with software was for an academic system that coordinated scheduling and grades. It was written in BASIC, with no source control. The software developers who maintained it learned to recognize versions based on which bugs still existed in the code and which patches had been applied.

Katrinka, on the other hand, graduated into a booming economy and took a job with Deloitte, which was hiring liberal arts majors to be accountants for their soft skills. While working towards her CPA at night, she spent her days dealing directly with clients in a wide range of industries.

Both Katrinka and Denise agree that their close interaction with customers early on in their careers is important to how they lead today. They believe in a simple mantra: Every customer is someone with a real problem who has been promised value and is taking a risk that you and your company will solve it for them.

Denise remembers two experiences that drive the point home. Many years ago, she arrived at the Bank of Bermuda, in a suit, to resolve a recurring network issue. The person she planned to meet was already there, waiting impatiently, in shorts and sandals. Immediately upon her arrival, he lost his temper. But, despite his inappropriate behavior, Denise kept her cool. And over the next week, she fixed the bug and was given an award from the Bank of Bermuda for her hard work and expertise. On another occasion, Denise arrived at a chicken factory by plane, very late, on a rainy night to fix a bug. She headed out towards the data center where she found the vice president in a state of panic. What was she understood was that every minute the server was down, he had 400 drivers sitting in loading docks with no idea where to take tons of frozen chicken. Eventually the matter was solved. In both cases, Denise took away two main things: People don't use software for its own sake, they use it accomplish a goal or solve a problem. And, software problems are also people problems.

The next step in the acceleration of Denise's and Katrinka's careers involves their connections with colleagues in the field.

Katrinka earned an MBA and began working for the software division of a major networking equipment company. Eventually dissatisfied with the level of progress the management of the division was making, and with no prospects of being promoted, she decided to move on. The day after her farewell party, she got a call from the president of the company. He told her he was surprised by her departure and asked for one last meeting with her. She accepted, and in that meeting, she was not only rehired her but promoted her to replace former boss. Katrinka immediately set about instituting a more passionate, risk-taking approach to management that encouraged growth in the software division.

For Denise, management of a department was not what she had envisioned. She wanted to be a kernel developer. Then, a sudden change in circumstances forced her to look at management differently. She was working as a technical lead for a great team on a beloved project, when one day their project team lead (PTL) bailed. Someone had to step up. Someone had to pick up the pieces in order for the project to continue. Coworkers encouraged her to take on the challenge, and she did.

Technology is ever-changing and evolving, and so too, must its leaders be. In this effort, Denise and Katrinka focus on two observations:

1) Concepts are repeatedly applied in different contexts with different technologies. (Like, virtualization on the mainframe, and commodity hardware.)

2) Clear thinking is needed in order to make real change happen; look beyond the jargon and buzz.

Transitioning from being the leader of a small group to a large group is easier with a mentor and with colleagues who will give you honest feedback about your potential, strengths, and weaknesses. Having made that jump, Katrinka and Denise say there is no such thing as a perfect team because they are made up of real people with real lives. Sometimes people are happy, sometimes sad, and sometimes exhausted. Other times, people are new to a position or project, or pursuing other opportunities. The key to being a leader is to bring out the best from the people on your team in spite of all that. When the pace or pressure becomes overwhelming, they reflect on the company mission and the colleagues they works with.

Katrinka says if you ever see her on the beach selling flowers, you’ll know she’s had enough. But not until then.

She also stresses the importance of having an open mind. Opportunities there aren't obvious at first can end up having the biggest positive impact on your career. Denise was motivated by the stretch she made in her transition from contributor to leader: "If you’re completely sure, you’re probably choosing wrong. If you’re not nervous, you’re not stretching." She qualifies that advice with the disclaimer that she is also probably "too stubborn to turn down a challenge."

Leading open source into the future

Those who work for open source companies like Red Hat understand there is something unique about the culture of an open organization. "The sharing of frank opinions," according to Denise. Open and thorough discussion of the issues facing a community may lead to slower decisions, but they’re almost always better ones. This makes the ability to convey ideas clearly, think systemically, and carry people with you, valuable skills.

Katrinka likes the idea of a leader as mayor of a community, as put forward in a book called The Social Leader. Relying on influence instead of hierarchy is a new concept to many companies, but for one that is rooted in, and dependent on, a huge network of open source communities, it is an established practice.

Both Katrinka and Denise agree that where the open source world could do better is in our ability to truly listen to one another. We have a lot of practice at "talking on the Internet." Unfortunately, that comes with bias towards presenting a point-of-view over understanding others' perspectives.

On the topic of diversity in tech, Denise says, "We should have more women!" The work of groups like PyLadies, Django Girls, Women Who Code, Girl Develop It, and many others, give her reason for optimism. Katrinka notes that diversity is not simply a case of women and men, it's about embracing our different perspectives and allowing anyone with gifts and passion a safe place to contribute to the success of the open source movement.

After spending the afternoon talking with Denise and Katrinka about their leadership roles, career paths, and place in technology, I felt that the biggest emphasis was on the people who make up the teams, the communities, and even the problems. The best skills for the job then, are: effective listening, stepping outside your comfort zones, and detecting uneccessary information. Both Katrinka and Denise also receive satisfaction from helping others reach for their greatest potential.

Tim Hildred - I'm Tim. I like to write about how technology affects people, and vice versa. I’m constantly engaging with the news, tech, and culture with an eye to building the best possible sci-fi future. Every couple of weeks I’d like to share the best of it with you in a hopepunk newsletter (or on Twitter if you're into that sort of thing).
More about me