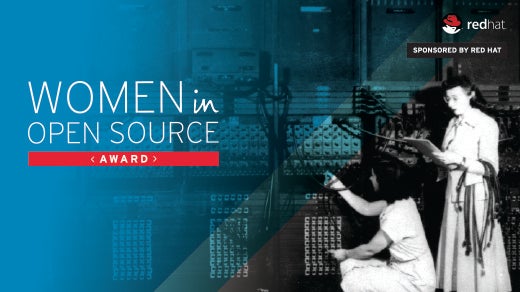 Last year Red Hat announced its first Women in Open Source Award, created to recognize the contributions that women are making in open source technologies and communities. I was honored to be on one of the committees that reviewed more than 100 nominations and narrowed the list down to 10 finalists divided into two categories: community and academic. Then the open source community voted, and I anxiously awaited the results. I wanted every woman on both lists to win, so I knew that no matter who ended up with most votes, I'd be happy.

Now that the winners have been announced at Red Hat Summit, I can officially congratulate Sarah Sharp, winner of the Community Award, and someone whom I've known and admired for a few years. Sarah is a software developer who has been involved in Linux kernel development since 2006. She's active in the open source community, and she coordinated kernel internships for the Outreach Program for Women (OWP), which was succeed by Outreachy earlier this year. Last October I ran into Sarah at LinuxCon Europe, where she was accompanied by seven of the former interns who were presenting on their projects.

In February 2015, The Linux Foundation released a Linux Development Report, which said that the Outreach Program for Women ranked #13 for Linux kernel contributions in the last cycle, and the interns contributed 1.5 percent of the patches to Linux kernel 3.11. Although Sarah recently stepped down as coordinator for the Linux kernel OPW internships, she's actively involved with Outreachy (along with Karen Sandler, another finalist for our Women in Open Source Award). In this interview, I asked Sarah about her career achievements so far, and her recommendations for inspiring the next generation of women in open source.

Congratulations on winning Red Hat's first Women in Open Source award. Looking back at the open source projects you've worked on and communities you've worked with, what do you think is one of your biggest achievements?

I'm really proud of two particular occasions. The first was when the USB 3.0 host controller driver I wrote got merged into the Linux kernel, making Linux the first operating system with USB 3.0 support. I spent a lot of time debugging my own code, wrestling with early prototype hardware, and clarifying specification ambiguities with the USB 3.0 specification architects. I was really happy when the driver landed, and every time I see a blue USB port on a Linux laptop, I think, "They're running my code!"

My second proudest moment is the very first round when the Linux kernel participated in the Outreach Program for Women (now called Outreachy). A lot of kernel maintainers complained about how newcomers would send them mangled patches, and grump about how the newcomers should really just RTFM and look at our patch submission guidelines. Of course, it turned out the manual was lacking or out of date, and there were a lot of steps to set up tools for Linux kernel development, so I spent a week and created a step-by-step tutorial.

It was really gratifying to see those first applicants go through my tutorial and send well-formed patches. I've loved watching those interns move onto bigger projects, and even get hired to work on the Linux kernel, and I'm really proud I was able to help people get involved in Linux kernel development.

It's important to increase the visibility of minorities in open source, and one of the ways we can do that is to encourage those community members to give talks at conferences. When you speak at a conference, people recognize you as an expert on your subject matter, and it's a really good chance to network.

So how do we increase the number of minority conference speakers? It's not enough to advertise being a welcoming conference with a good code of conduct; you have to also reach out to minorities and encourage them to submit, tweet at @callbackwomen, show up at their user groups, and maybe even host a proposal hackathon.

What do you think are the low-hanging fruits for inspiring a new generation to join the open source movement?

There are a lot of young people who are interested in Arduino and Raspberry Pi, or other open source hardware projects. They love the endless possibilities, and the fact that they can get help online, or share projects. However, they don't necessarily associate those projects with open source, or know how to get involved with an open source community. Making that connection—through articles, videos, and mentoring people&mdashis important.

I'm really honored to be recognized for both my technical achievements and my efforts to improve open source communities. I believe we should be focusing on diversity and mentorship, which is why I'm donating my Women in Open Source award stipend to Outreachy to support internships and the conference travel fund.

What to read next
Tags
Business
Rikki Endsley