Going open can be a culture shock

Several months ago, Red Hatters David Egts and Gunnar Hellekson welcomed Paul Smith, Red Hat Public Sector VP, onto their podcast, The Dave & Gunnar Show, where they discussed Smith's experience in an open organization. The conversation is insightful—and we recommend tuning in.

Here's how Smith describes the culture shock he experienced when transitioning from a traditional organization to an open one:

I came from a lot of other large organizations. [Here's] an interesting story about my days at Unisys.

I won't say when, but it was sometime in the late '80s. I was in high school and was an intern at the time, but (talk about positional leadership) this is kind of how we were brought up. Your position in the company was very much conspicuous by the office space that you had. As a matter of fact, my first sales manager job, I graduated from an office that had, like, 15 tiles to an office that had 20 tiles. Tiles are the way the real estate companies actually count cubic foot, because they're usually 2x2s.

The vice president at the time had this beautiful office that was the size of my living room now with a couch, the table top was pure glass, there were no file cabinets. There was a bathroom in the corner. It was just absolutely gorgeous, and when you walked into that office you knew you were walking into some place of power, and you almost felt like you needed to genuflect coming in and out of the office.

So those are the types of organizations that we grew up in, which is kind of the top-down kind of organization. And I think Jim kind of experienced the same thing from his background. Classically trained at Harvard Business School, the Boston Consulting Group, Delta Air Lines and the mother of all hierarchies, and then coming in here to Red Hat, where we had memo-list [...] basically coming into an organization where everyone has a voice and everyone's opinion really does have merit and it gets vetted out whether some of the opinions are good or some of them are not.

There was a cultural change that I experienced much the same way that Jim did. As a matter of fact, I was talking to Jim at our sales kickoff meeting, when he was doing some book signings, and he turned me on to Stanley McChrystal's book, Team of Teams. So, for most of you, at least in our organization, you'll know that General McChrystal was a four-star. His last assignment was Commander of the American Coalition Forces in Afghanistan. And he was fighting a brand new type of enemy that was very agile, that made use of modern technology, that operated in small cells—small groups that did things fast. So he basically talks about how he had to transform the oldest of all hierarchy (with the exception of maybe the Catholic church), moving from a command-and-control type of environment to creating a team of teams that could actually iterate fast, come up with some ideas and move it out to the field for fast execution. Otherwise, they were not going to do well in a lot of the campaigns they were running in Iraq. So it was really kind of cool (as Jim pointed out to me) that McChrystal's book kind of came out very shortly after The Open Organization. One of course deals with leadership management philosophies and the other one deals with how to conduct warfare in the modern world.

So we have all gone through these transformations, and I think one of the lessons is: Change or die. If you're not adopting these types of organizational leadership skills—or not tuned into them—you'll be part of the Mode One guys who will never make it to Mode 2. Ever.

Listen to the entire episode for even more great stories. 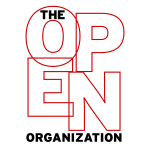