Download this comprehensive eBook to learn awk and get started using it. 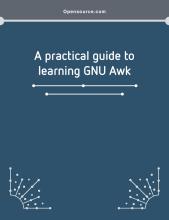 Awk is known for its robust ability to process and interpret data from text files. It is used as a command as often as it is used as an interpreted script. Awk is robust enough as a language that it has been used to program a wiki and even (believe it or not) a retargetable assembler for eight-bit microprocessors. Learning awk is mostly a matter of using awk. Once you get the hang of it, you can write Bash functions that invoke your custom awk commands for easier use. With enough practice, you'll be able to write scripts to parse complex datasets. This eBook covers what you need to know to get started using awk. Read up on its history and terminology, then follow the practical tutorials to use awk in real life. This eBook also contains our GNU awk cheat sheet.

File
What to read next