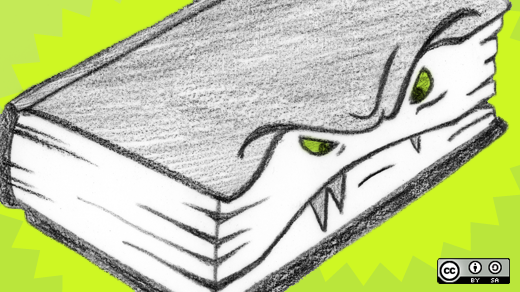 Jaron Lanier is certainly getting his share of press lately.  His latest guest starring role: a rant in Monday's very special episode of L. Gordon Crozier's technology column for the Wall Street Journal.  Seems like Lanier is becoming a go-to guy when one is in need of a sound bite denouncing "free culture" in all of its radical and dangerous forms.

It's a perfect fit, too.  To the world of traditional media, Lanier must seem like the perfect spokesmodel: the dreadlocked visionary who has journeyed for years in the virtual wilderness, and has now returned to warn us of our horrible dystopian future, in which all the creative souls of the world must deliver pizzas because no one values their genius.  What we call a commons, Lanier calls "Digital Maoism".

Nothing new to us in the open source world -- although it's been a while since anyone called us communists.  With a straight face, anyway.

The latest vector of attack for the red menace: remixable textbooks.

Apparently, Macmillan is going to give textbook remixing a try, with the launch of their new Dynamic Books platform.  It's pretty interesting stuff, actually.

It's clear that Macmillan is recognizing some important new opportunites as they venture into the world of online texts.  Professors are almost never happy with a textbook as it is written; many go so far as to write their own textbooks from scratch.  Allowing these professors to start more easily from someone else's otherwise strong base seems like a perfectly logical -- one might even say scientific -- method of extending and improving academic discourse.  These kinds of innovations are now possible in a digital world, in which the costs of producing atoms and delivering bits are finally, mercifully separated.

Lanier takes a somewhat dimmer view of Macmillan's new foray into textbook remixing.  Crozier tees it up for us:

Mr. Lanier's new book, "You Are Not a Gadget," rails against the Internet for promoting a "digital Maoism," in which "a mashup is more important than the sources who were mashed." He says anonymous groups creating content lack the accountability of an individual. "If you're worried about history or science being politicized, a mashup will be even worse. Individual textbook authors are not perfect, but at least they have a voice with consistency and creativity."

What an oddly shrill response -- but a response that puts the nature of Lanier's misunderstanding in very sharp relief.

Find me any accepted open license, anywhere on Earth, in any language, that doesn't have an attribution clause as one of its central features.

No, that's okay.  Don't waste your time, because there aren't any.

It's a classic logical fallacy: some mashups are anonymous, therefore all mashups are anonymous.  Which is, of course, utter nonsense.  In an honest-to-goodness actual digital commons, the notion of attribution is ingrained and enforced -- a reality quite removed from Lanier's vision, in which every professor is a potential saboteur, painting virtual moustaches on the Mona Lisas of scholarship, and the poor stupid sheeple of the world won't know the difference.

Crozier clearly worries about this as well, although somewhat more diplomatically:

We have to wonder about the unintended consequences of a textbook absent an author. For example, since 1948 generations of students learned from Paul Samuelson's "Economics," which has sold four million copies. It had quirks and went through many editions. But it also was elegantly written and became canonical. What happens when students learn from what appears to be the same text but isn't?

Gee, that would obviously be terrible, wouldn't it?  A textbook absent an author!  Of course, none of these textbooks will be "absent an author" any more than emacs is absent Richard Stallman.  An authorless system would be to no one's benefit at all, which means that no one would stand for it.  In the academic world, in which appeal to authority is high art and plagiarism is felony, how can one entertain, even for a second, the ludicrous notion that some cow college econ professor might be able to get away with taking credit for Paul Samuelson's "Economics"?

It seems quite reasonable to imagine a digital verion of Samuelson on steroids, with Talmud-like commentaries by the greatest economic minds of the day, all very clearly labeled, with attractive and useful interfaces to differentiate between various interpretations.  The original work would always be the "upstream", and professors would be able to overlay digital "patches", clearly marked as such, to clarify this point or that point.  Such a work would be a tremendous boon to scholarship -- and would look suspiciously like the systems that open source developers have used to manage bits for many years now.

Near the close of the article, Mr. Crozier says "in the case of textbooks there should at least be transparency when the relationship between authors and students is amended. Readers should be able to know they've read the book the author intended or what changes were made and why."

Amen to that.  We are in violent agreement.  Now, I don't know what model Macmillan will choose, so I can't speak for them -- but it's clear that they are very much following the open content playbook, and in the world of open content, this transparency is precisely the point.  What's truly "appalling and preposterous" is that the Jaron Laniers of the world would have you believe otherwise.