A review of the Printrbot 3D printer

If you're looking around for 3D printers that are both inexpensive and open source friendly, the Printrbot Simple Kit will probably catch your attention.

This Kit sells for close to $300, and for our team required a full-day of DIY assembly, though skilled makers might be able to put it together in four hours or so. Our team was made up of three PhDs and two R&D engineers, and it took us close to eight hours to complete the assembly, which of course included some philosophical and licensing discussions and a couple of trips to the hardware store. It was indeed a lot of fun!

Because there are multiple models, it is important to verify that you are using the appropriate set of instructions. Detailed step-by-step instructions are available on the Printrbot website. 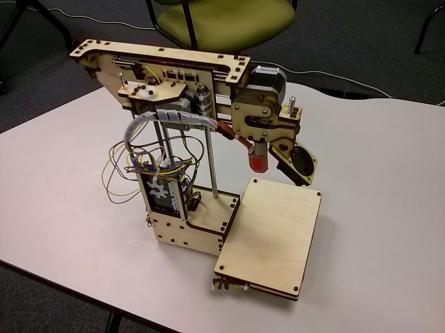 This printer is a great device for taking your first steps into the world of 3D printing. As we assembled it, it became very clear how the printer works and that knowledge became quite valuable down the road when we were fine-tuning the printer to adjust it to specific objects.

The printer doesn't have it's own software (which is actually a good thing). The following open source programs work well with it:

With the Printrbot, it is important to start with very simple models and only increase complexity as you get familiar with the printer and its features. A constellation of models can be found in the open repository: Thingiverse.

Our team also found that it is important to spend the time to set up the proper parameters of the printer into the auxiliary programs (Repetier and Slic3r). In particular the bed size and the calibration of the home location for all the motors.

As we watched this printer build 3D models out of molten PLA plastic, there was no doubt that a manufacturing revolution is unfolding before our eyes. Just as the personal computer started the Information Revolution in the 1980s. The best thing we can do is put these printers in the hands of students and teachers so they can experiment and learn, unleashing a whole new world of educational creativity. We will be doing just that during this Spring semester in the Physical Computing class at SUNY Albany.