Why open data matters in education

Rajan attends a school in a small village located around 140 kilometers from my hometown of Amritsar, India. Otherwise an active boy who is adept in handling numbers in the ledger book at his father’s convenience store and who loves playing flute, he falls into the depths of apathy and indifference the moment he enters his classroom. Rajan is not at fault for the abrupt change in his behavior at the school. He attends a school that has one teacher for all its students from classes starting from the first standard through the fifth standard, that has no proper infrastructure, a dilapidated library, and an obsolete teaching methodology.

In an environment where the students do not get personal attention indispensable for nurturing their strengths, where the teachers lack the professional training to bring sophisticated teaching methods in the classroom, and where the concept of a customized curriculum is unheard of, Rajan's distrust in his school is not surprising. Like him, millions of students in India in particular, and the developing world in general, get lost in the complex maze of the schooling system. Interestingly, these millions are counted in the educated and literate sections of governmental statistics. These scenarios are indicative of the fact that the solution to the problems of education transcends far beyond just opening up schools in the rural areas of the country.

Nelson Mandela once said that "Education is the most powerful weapon which you can use to change the world." It thus becomes a responsibility of both the public and the private players to create a system which maximizes the potential of children in their formative years. The way students learn can be constructively influenced and improved. In the long run, quality of a person's life grows proportionally to the quality of education of the person. 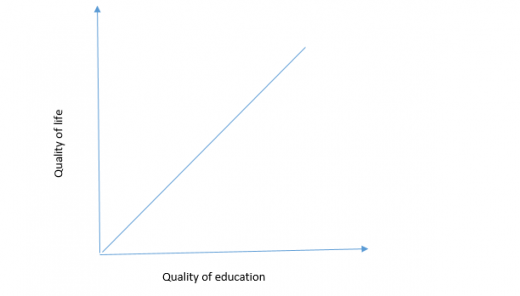 Similar to the way open source changed the way technology is built and used, open data has begun to change the way the world looks at data. Open data provides an opportunity to resolve some of the world's most complicated problems, whether in private sector or public sector. Businesses and governments have already started to realize the benefits that opening up the data and using/reusing it can bring. Joel Gurin, senior advisor at the Governance Lab at New York University, writes in his book "Open Data Now" that “open data is the world’s greatest free resource—unprecedented access to thousands of databases—and it is one of the most revolutionary developments since the information Age began."

Education in general and schooling system in particular is one area where the journey has just begin and there is still a long way to go. In comparison to other areas, it is one such critical area which is still largely untouched by innovative solutions, especially when it comes to people living at the 'bottom of the pyramid'. In such a scenario, what role can open data play in improving the situation? Why is it relevant to the education system? What new approaches does it offers to the problem in context? A few perspectives in this regards are as follows.

Approximately 5500 kilometers away from that village near Amritsar is Finland, where the standards of schooling system and education take a 180 degree turn. Whether it is a sprawling suburb of Espoo near Helsinki or the thinly populated Lapland, the country's 62,000 teachers and 3,500 schools ensure that their students get the best of education and grow as responsible citizens. Finland has consistently performed high on Programme for International Student Assessment (PISA), a standardized test given to 15 year olds in more than 40 global venues.

Whether it is deciphering text or manipulating numbers, Finnish students are among the top performers in the world. Teachers rarely stand at the front of the classroom for the entire 50 minutes, and it is typical to see students walking around from one workshop to another which exemplifies high degree of autonomy in thinking and decision making that the students have. There is an evident disparity in educational systems and the growth of students across the world. Open data increases the understanding of this disparity across different countries tremendously. Solution providers can better understand what works where and what does not works in what parts of the world. They can also understand and analyze the situations most amicable for creating a learning environment.

A dashboard on the World Bank's open data website vividly showcases, along with other statistics, the stark difference in the autonomy in planning and management of school budget between Burkino Faso and Finland. These kind of visualizations created from open data increases the contextual intelligence and consequently equips the solution providers to focus on areas which need the maximum attention.

Improved understanding of the problem

Anything that can be measured can be resolved. Applications built on top of open data can be used to monitor among other things, the learning patterns of students, their performance patterns, teacher absenteeism, and on a larger scale regions that perform better and regions that perform poorly. This creates a better grip on the problem we are encountering as well as the scale of the problem. An educational map indicating the best and the worst areas and the scale of the problem in each of those areas can assist both the private players and the public entities to customize solutions accordingly.

With the push to open data in the government sector in the US, under the leadership of Aneesh Chopra, who served as the first chief technology officer of the country, umpteen opportunities have been created for start up entrepreneurs and public sector employees. The shift of the policy towards opening up the data to the public has enhanced the collaboration opportunities between government and the citizens. Many initiatives like the School of Open, School of Data, and Open Knowledge are collaborating with public sector across the developing world to assist them make better use of their data. A bootcamp organized by the School of Data in conjunction with the government and the civil society organizations resulted in the participants creating a map showcasing whether schools in Moldova encourage rather integration or segregation. Innovation in the educational sector can result from the effective collaboration of open data, public policy and start up business dedicated to change the landscape of schooling system.

Lessons from other fields

Jay Bradner, a researcher at Dana-Farber Cancer Institute in Boston, was stuck by the explosion of data about the human genome on one hand and the reliance on primitive anti-cancer drug like arsenic on the other. Bradner was a big believer in sharing research in open data. He began work on a compound that could interfere with malignant cells in a rare kind of cancer called midline carcinoma. He shared his data with other labs and got important insights from Oxford, and soon showed that the compound, which they called JQ1, could stop the growth of that cancer in mice. He later shared his research at the earliest prototype stage which in turn attracted interest from various pharmaceutical companies, academic labs, and start-ups. This example from the healthcare field exemplifies that when research comes out of an isolated lab, it benefits society at a faster rate. Many businesses in various industries ranging from telecommunication to transportation have benefited from open data. The same success built on the common methodology of leveraging open data can also be replicated in education.

I strongly believe that improving the state of education and making children better learners is a human endeavor. It requires understanding the behavior of children, what motivates them and what demotivates them. Technology solutions based on open data can strengthen and fuel that human endeavor on which much of our future depends.

Aseem Sharma - Aseem is a graduate of Conrad Business, Entrepreneurship and Technology Center, Faculty of Engineering, University of Waterloo, Canada. He also holds a masters in computers application from Guru Nanak Dev University, Punjab, India. On Opensource.com, he serves as an author. He also blogs at http://aseemsharma.info/.
More about me