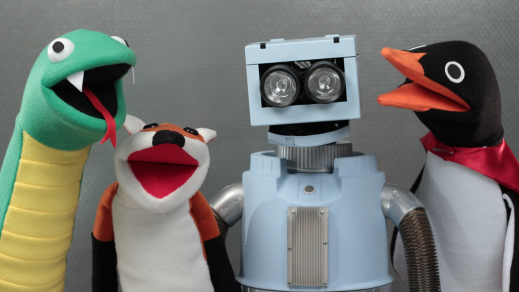 Brother team Jared and JR Nielsen are the puppet masters behind The Hello World Program, a video and tutorial series hosted by a penguin, a snake, a fox, and a robot. They bring to life the learning and fun of open source programming, web development, and computer science. Plus, all of the content is licensed under Creative Commons—so if you have kids or young friends, or if you are an educator, you are encouraged to share and use this material to teach others.

A sampling of topics include:

As with the nature of open source communities, there are ways you can give back too. Daisy's web development diary is for sale on Gumroad for $10.00, or leave feedback and suggestions for each tutorial or video to improve the material.

In my interview with the Nielsen brothers, they tell me more about their open source video and tutorial making process and how they hope The Hello World Program will grow.

How do you make your videos for tech education?

We only use free or open source, Linux-based software for our media production. I distinguish between the two because the best video editor we found on Linux is Lightworks, which is free but not open source (yet). Our theme song was written using LMMS, our 3D animations are rendered in Blender, our graphics are all done in Inkscape and GIMP, and our stopmotion is created using Entangle and then compiled with avconv.

Why use free and open source software?

We use free and open source software for three reasons:

First, as we touched on above, one of our goals is to remove the economic barrier associated with learning computer science. By extension, we wanted our media production tools to be accessible as well. We provide tutorials ranging from puppet-making to video editing on our site so that anyone with access to a computer and a camera could make their own web series like we do. Second, when we were starting, the idea of creating a professional product using only FOSS seemed crazy. We loved the idea of a challenge. Lastly, much of our skill set and knowledge base is built upon the work that others freely contributed to the commons. Our projects are an effort to further open source culture.

How did you choose computer science, Linux, web development, and Python?

We’ve always had an interest in computers and technology but found it difficult to learn on our own. So we created an approachable and positive learning environment for these concepts.

One of the aims of the Hello World Program is to remove the economic barrier associated with educational access. We specifically chose Linux, HTML, and Python because these tools are not only free, they are rapidly gaining in popularity and provide a powerful integrated, foundation for any to student to build upon.

Will you stick with these or expand?

We want to expand into other STEM fields, but we’re currently focused on finishing the four tracks we’ve already started. Once those are complete, we will evaluate and determine the next course for The Hello World Program.

What experiences and mentors inspired you to teach through puppets?

We grew up in a small town in rural Utah. With few neighbors and structured activities we created our own entertainment, making puppets and shooting short videos with our father’s camcorder. We learned about the world by watching Sesame Street, The Muppets, and Mr. Roger's Neighborhood. Through their creative efforts, Jim Henson and Fred Rogers instilled in us a passion for lifelong learning.

We wanted to create an educational tech show, but we’re both introverts and extremely camera shy, so the obvious course of action was to use puppets. We have an affinity for analog effects in cinema, such as stopmotion and miniatures. Computer generated imagery requires a suspension of disbelief, but puppets are immediately relatable because they are real, tangible objects. Puppeteering is like engineering in designing something that didn’t exist before and bringing it to life.

Tell us about a success story.

Our booth at Maker Faire Bay Area 2013 received three Editor’s Choice Blue Ribbon awards. Our presentation at LinuxCon North America 2013 was so well received we were invited to Edinburgh for LinuxCon Europe. But the real success was how this project brought us together as adults. Working on The Hello World Program gives us the opportunity to build a stronger relationship than we had in our youth.