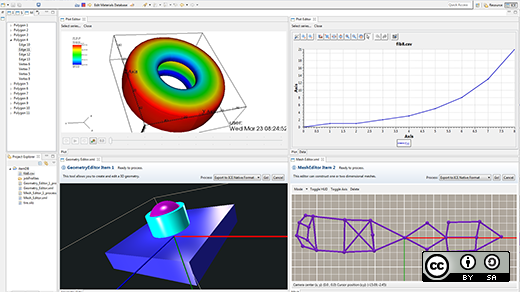 Gone are the days of scientists processing data by hand. Scientific tools are rapidly scaling to meet the increasing demands of their users, both in terms of complexity and sheer volumes of data.

In various domains, highly sophisticated scientific workbenches have been developed to enable scientists and researchers to quickly make sense of their data in a reproducible way. Several scientific workbenches have been built on top of the Eclipse Rich Client Platform (RCP) framework and offer up open source environments for processing and visualizing data. The companies and institutions behind these workbenches got together to collaborate on these tools, and so the Eclipse Science Working Group was born.

Here are five great scientific workbenches from members of the Eclipse Science Group. Every one of them is open source and built on Java and Eclipse RCP. 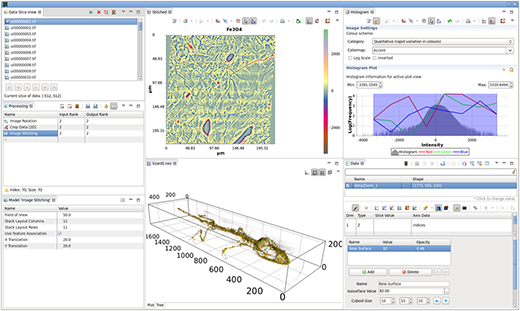 DAWNSci's processing views including the 3D volume & isosurfaces of a lizard

DAWNSci is a data analysis workbench developed by a collaboration of synchrotron sites. It is used by leading scientists and researchers on a variety things: viruses, retinas, dinosaur bones, and chocolate, to name a few. Its features include 1D, 2D, and 3D plotting, processing and workflow algorithms for image analysis, and fully integrated Python support. DAWNSci's underlying numerical data structures have been spun off to be independently reusable as part of the Eclipse January project. 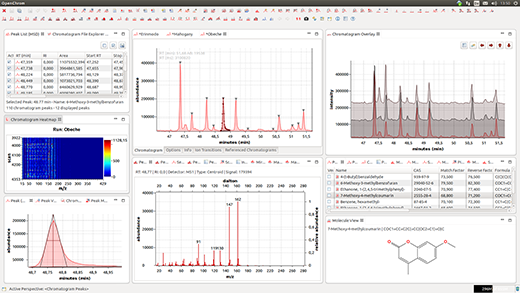 ChemClipse is an open source workbench for analytical chemistry. It is used to analyze data from chromatography and mass spectrometry experiments. These techniques are used to identify the underlying components that make up materials, so are used heavily in fields such as forensics, quality control and food analytics. ChemClipse enables chemists to evaluate data sets and use functionality like peak detection and peak integration to identify substances as well as produce reports. 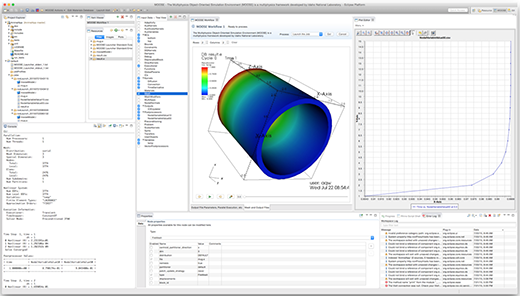 ICE plugins for MOOSE, shown after the real-time running and post-processing of a 3D convection simulation

The Integrated Computational Environment (ICE) is a rich modeling and simulation workbench​. It improves productivity and streamlines workflows for computational scientists as they create input files, launch jobs on local or remote machines, or process the resulting output. ICE is used extensively in fields ranging from analyzing nuclear reactors to neutron reflectivity simulation. Its rich feature set includes 3D visualizations and the ability to integrate with other frameworks, such as MOOSE. The underlying visualizations and data structures of the ICE project will soon be reusable independently as part of the Eclipse Advanced Visualization Project (EAVP) and Eclipse January project, respectively. 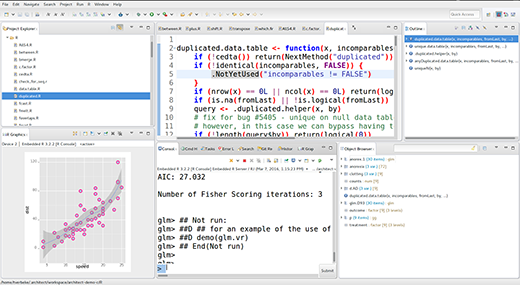 Architect in action with its R features for data science

Architect provides a development environment for data science. Architect provides features for building statistical models and has particularly rich support for the R language, including editors and console integration. In also provides some nice features for editing Docker files. A spin-off project from the Architect team is a Jupyter console plugin. This allows a console in Eclipse to integrate with any Jupyter kernel, providing an easy way to get Julia, R, or Python embedded in your workbench. 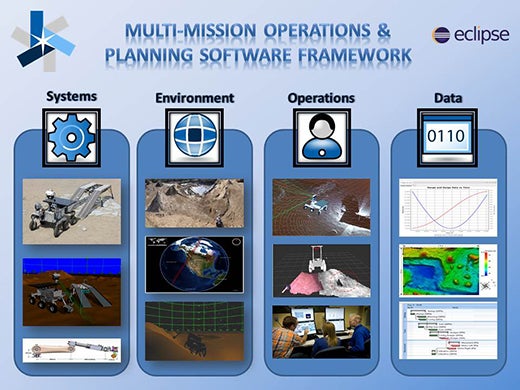 Apogy is a workbench developed and used by the Canadian Space Agency for multi-mission operations and planning. Apogy integrates various technologies to provide a dedicated workbench for operations of systems such as robotic arms, rovers and sensors. Apogy uses extensive modeling functionality to help visualize 3D topologies and 3D representation of scientific instruments and spacecraft.

The institutions and companies behind these workbenches are all members of the Eclipse Science Working Group. Each one solves scientific problems in specific domains, yet there is a lot of overlap and common functionality. This results in collaborative projects that form basic building blocks that can be reused for any scientific workbench. The Eclipse Science Working group features fundamental projects for common data structures:

It's a friendly group, and anyone can participate by signing up to the forum. This lines up well with the goals of the group, which include fostering collaboration, working together on open software for science, and developing great tools for science.

Tracy Miranda - Tracy Miranda is a software developer and founder of Kichwa Coders, a software consultancy specializing in Eclipse tools for scientific and embedded software. Tracy has been using Eclipse since 2003 and is actively involved in the community, particularly the Eclipse Science Working Group. Tracy has a background in electronics system design. She mentors young coders at the festival of code for Young Rewired State. Follow Tracy on Twitter @tracymiranda.
More about me