Google recently announced the release of its Science Journal app, a tool intended to "inspire future makers and scientists." All you need to get started is an Android phone—it will make use of the sensors on your phone and offers a digital science notebook to record your findings. The app is free and slated to be released open source later this summer. Google has already released microcontroller firmware for Arduino-based sensors on GitHub. 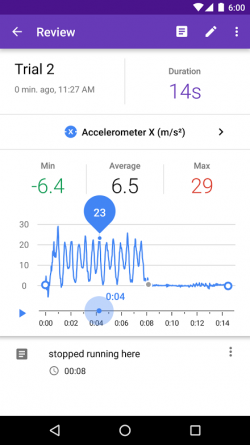 You can start experimenting and making notebook entries once you have downloaded the app, and the interface is friendly and approachable. There are a number of experiments I intend to do with my 7-year-old son, and the Arduino kits look like something he would love too. There is a site where US-based customers can purchase kits to do more experiments, and the post states they want to foster an "open ecosystem where people everywhere can use Science Journal to create their own activities, integrate their own sensors, and even build kits of their own."

An initial runthrough reveals features like trials, where it states: "You should repeat your experiment several times, with the same experiment setup, to see whether the data is consistent." It's easy to switch between current values from a sensor and a live log of readings. There is also an enable audio feature that indicates the current value with audio, and you can hit the record button to start recording data. These are automatically added as trials, which can be reviewed. Notes can also be added, and some basic statistics are extracted.

This is a great initiative from Google to inspire the next generation of scientists, and as a father of two I can see great potential in their approach for bringing it to younger scientists. Science needs to be more open, and we need to work harder to get people young and old thinking like scientists. I was able to start making recordings within seconds of downloading the app, and thanks to the friendly interface, my son was able to interact with it quickly too.

What to read next
Tags
Education
Android
Marcus D. Hanwell