Join us Feb. 16 when we host General Hugh Shelton, former Chairman of the Joint Chiefs of Staff and now Chairman of the Board of Directors of Red Hat, in the next Open Your World Forum webcast.

General Shelton's recently published autobiography, Without Hesitation: The Odyssey of an American Warrior

, chronicles his distinguished and nearly four-decade military career, spanning a history from the Vietnam War to 9/11 and his time as Chairman of the Joint Chiefs of Staff. During the webcast, 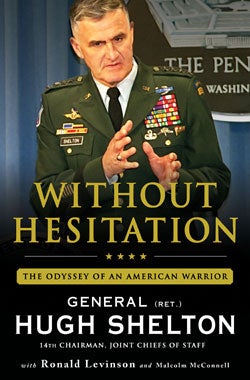 he'll reflect on that career and the links that his own experiences and the military in general have to the principles that the open source way comprises.

When we talk about the open source way, what we're really talking about are a set of principles and values, including meritocracy, transparency, rapid prototyping, and authenticity. And although open source communities are seldom considered militaristic, they have quite a bit in common with the military around these principles.

For example, militaries around the world and throughout history are perhaps the closest examples we have to true, functioning meritocracies. Shelton’s career from his entry into the Army through his promotion to Chairman of the Joint Chiefs of Staff in 1997 was built on the military’s long-standing meritocracy. In his autobiography, he writes, “I recognized that moving into the general-officer ranks, I might...have a chance to make a much greater impact...in terms of making the Army better. Greater responsibility came with the turf, and I viewed the promotion as an opportunity in that regard.”

Rapid prototyping has become increasingly important when fighting modern threats like terrorism, which move quickly, unbounded by national borders or the international rules of armed conflict. Decades ago, during the Vietnam War, General Shelton was early in his career and already experimenting with rapid prototyping in intelligence gathering and analysis.

General Shelton has exemplified transparency in his military career, which on the surface seems to be the least likely place for overlap with the open source way. After all, there's national security and the chain of command to consider. But there's also balance required, and the public's trust in its military relies on a level of transparency into its actions. “I’m frequently asked if (in the interest of national security) I have ever lied to the press," General Shelton wrote in Without Hesitation. "My answer: no. They often follow up by asking if there is ever an occasion when it might be necessary to do so. My answer: I sure can’t think of any at the moment.”

We hope you'll join us to hear more from General Shelton on February 16 about these stories and more. You'll also have an opportunity to ask your own questions.