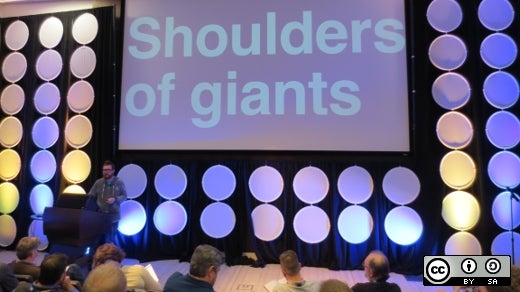 One of the ways Obama won the 2012 election was with technology. It wasn’t the only way, but technology offered one thing that feet on the street couldn’t: a force multiplier effect. The technology used during the campaign to accept donations and manage volunteers was based on open source and open standards. Open source helped the campaign accomplish several things. It enabled the team building the technology to create a culture of code, innovate faster, and solve problems the open source way.

Harper Reed is one of the featured keynote speakers at Palmetto Open Source Conference (POSSCON). Reed was the CTO of Obama for America and is an engineer who builds paradigm-shifting technology and leads others to do the same. During his keynote, he shared some stories from the trenches and three lessons from his days on the campaign.

He started off with the basics. Things like, hiring engineers to do engineering and focusing on solving the problem. They wanted to use what they could, technology-wise, to solve the problem the quickest way—and open source offered the opportunity to achieve that at a dramatic pace.

He also highlighted the power of the open source development model and how re-using existing code and platforms allowed them to develop at a rapid past. They didn't want to invent things, they just wanted to put them together.

Three lessons from the Obama for America campaign

Reed shared three lessons that made the campaign successful, at least from a technology perspective: Building a great team, practice failure, and use open source.

Reed said the real innovation for the technology was the team of people they brought together. You can’t be afraid to fire people, because bad habits can become infectious. On hiring, Reed said that A’s hire A’s and B’s hire C’s. Basically, hire people smarter than you. For his team, open source was one of the best recruiting tools out there.

Other advice included measuring everything—aggressively. Talk about successes and talk about failure. His team celebrated wins every Friday with a "retro"; a look back at their successes for the week, no matter how big or small. It inspired the team to keep going and look forward to the getting back to work the next week.

Always make sure to give credit where it’s do. But don’t credit the failure, build on it and make it successful.

Creating a great team allowed them to iteratively develop and ship. And it’s important to ship code. It's important to get it out there.

Reed stressed the importance of user experience (UX) to building the technology during the campaign. He said this is the first time any campaign hired a UX designer and they made a strategic decision to invest in user experience. And they actually talked to their users. Lots of them.

Testing early and often and breaking things was also important. The team practiced multi-variant testing. They always "rolled forward" and never rolled back. Their preference was to patch it and do another release. Rolling back is safe, but it hurts the users.

The Obama for America technology team had to move fast, really fast. So they needed to stand on the shoulder of giants and open source allowed them to stand taller. Open source was one of the only things that has spanned his career, both at Threadless and Obama for America. So it's part of his DNA.

One of the best features about open source is that you can build on top of it. Reed added five reasons to choose open source:

The team tried to only use things or piece things together and they avoided inventing new things. That’s the power of open source.

Reed stressed to the audience that we understand what we're using. Know what the license is and if there is support for the project. Respect open source.

The big takeaways for Reed were about releasing early and often, coding iteratively, and creating culture. The technology may not make it to the next campaign, but if there is one thing that Reed would like to give forward to the next campaign, it would be the people and the process and open source culture.