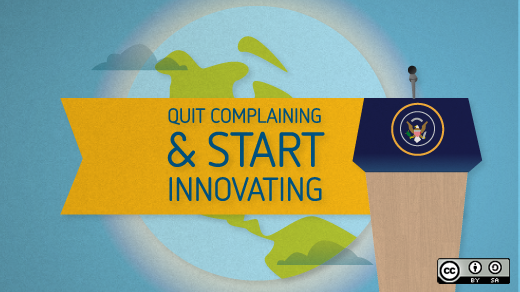 That shiny new app isn't cutting it at hackathons anymore. While the lure of creating something new to solve a problem is an enticing road to go down, it's a path that puts sustainability, maintainability, and community building on the wayside. Augmentation is the new shiny object—the idea that a government agency is the maintainer of a project for civic hackers to contribute to. In fact, it might be more of a fixture. And helping out a government agency just got a lot more attractive.

Let's face it. It's hard to get a new project off the ground. You have to find contributors, get the word out, and grow the user base. While I'm not discouraging starting new projects, we have entered into an era of civic hacking where reuse and collaboration are taking higher priorities—or at least they should.

The local Code for America brigade that I'm a part of, Code for Raleigh, identified three ways to move forward with civic hacking projects. New projects, or green field projects as we call it, are still part of the mix. We think there is more to helping out your local government and the citizens where you live than just starting new projects. There are two other important considerations once you've identified a problem and a potential solution.

It's excited to work on something new. You can start from scratch, choose the best coding language for the project, and harness the energy of a shiny new object to get the ball rolling.

Description: An open source project exists, most likely from Code for America or another Code for America Brigade that could be "cloned" (copied) and implemented for your city, region, or state.

Join forces with an existing project to take something that already exists and modify it for your needs. The open source way tells us to add more value to the project and contribute back. This is the classic "building on the shoulders of giants" approach and is an easy way to get a new application deployed without too much heavy-lifting.

On the flip side, it might take you a little effort to get up-to-speed on the project, how it works, and where it needs improvements. But the benefits of this approach far outweigh the risks. An added bonus is that you can help grow an existing community and bring fresh ideas to the project. Because it's typically easier to get up and running, you can spend most of your creative time thinking up new features (which can give it that green field project feel).

One of the most popular examples of a cloned project is the Code for America Adopta application.

Description: Vetted and supported projects that are currently being worked on by a city, county, or state agency where civic hackers can support development activity, provide user feedback, increase adoption, and assist in testing by augmenting a sponsored project.

This is the most interesting model to look into for both civic hackers and government IT agencies solving problems today. While there is a lot of preparation needed in order to make this successful for a hackathon event or a recurring civic hacking night, that investment by the agency will pay off with quality code commitments and feedback. The preparation might involve creating a repository, writing good documentation, maintaining a backlog, and reviewing project submissions (code, bug reports, feature requests, etc.).

The agency benefits from a fresh perspective of the problem and accelerated development. Many government IT shops are facing smaller budgets, more projects, and may even lack some of the skill-sets needed to implement the projects they want to work on. By reaching out to their local Code for America brigade and tech communities, government IT can augment their staff with passionate technologists who want to help advance the mission.

For the civic hackers, it's a short-term commitment. The idea is that they can show up to a hackathon or hack night, grab a few tasks from the backlog, and submit their code for review. They're able to contribute to a project without having to maintain or deploy the solution.

The part that I love about the augmentation model is it resolves that pesky hand-off between citizen coders and government agencies. Because the agency is maintaining the code base, the scary moment where you "give the agency a puppy" goes away. In this model, civic hackers no longer have to hand their code over at regular intervals.

As an example, Jim Alberque with the City of Raleigh brought two projects to the December 2014 Code for Raleigh brigade meet-up. First there was Hospitality, a noise complaint app to help with the Glenwood South Hospitality District that allows citizens to log noise complaints and/or directly connect with businesses. The other was Represent Map, a map that showcases the start-up scene in Raleigh that is part of a partnership with the economic development department in Raleigh. In both cases, Jim brought these city-developed apps to the Code for Raleigh meet-up to get feedback and ask for help. When I saw this happen, it became clear to me that the augmentation model was something worth pursuing further.

Augmented hacking takes engagement to new heights. This model is the path forward to take civic hacking and hacker engagement to the next level. To be clear, augmentation isn't the end all be all. It's part of a three-tier model identified in this post as a way to help civic hackers achieve their goals. Determine the right goal up front and your civic hacking project will be a success.