Is open source the missing building block to improved nutrition for schoolkids? 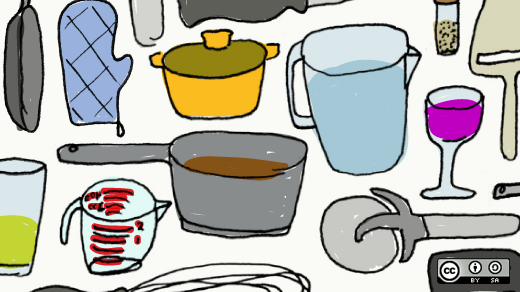 At the start of every new year resolutions on diet and health abound. Yet there seems to be little discussion on schoolchildren's health and nutrition, and taking a more open education approach to it. This is remarkable since childhood obesity and diabetes are at record levels in the US. Today there are 12.5 million obese children—three times as many as there were in the 1980s—according to the Centers for Disease Control and Prevention.

Worse, many states and mayors, such as Mayor Michael Bloomberg in New York City, have taken a dictatorial approach to banning home-baked good sales but not to banning store-bought, packaged goods or vending machines in schools. Efforts to curb childhood obesity and diabetes have been half-hearted at best. This year the federal government is supposed to set new nutritional guidelines and standards if it can wade through the controversy and lobbyists from the food and beverage industries. Meanwhile, in case you were unaware, the federal government has replaced the nutritional pyramid with two circles (one small circle for dairy; one large circle for fruits, vegetables, grains, and protein) to represent the foods and portions to eat; ideally fruits and vegetables should make up half of a person's daily diet and nutritional needs.

What is even more remarkable about the health awareness efforts on children's health and nutrition, thought, is the lack of creativity, inventiveness, and open methods to include children with food, cooking, and nutrition. Years ago, home economics classes were required as part of a general curriculum to graduate—a form of conformance, compliance, and dependency. I remember baking brownies in junior high school according to a recipe provided by the teacher with all-purpose flour (which has little nutritional content) and probably with butter, trans-fats, or hydrogenated products too (which have few health benefits, if any); my high-tech younger brother burned his brownies and subsequently got a D grade in the same class years later, which he has never lived down. In home economics classes, there was no discussion on where to obtain recipes other than a cookbook or how to create recipes from scratch. There was no discussion on how to make alternative brownies with black beans, bananas, or more alternative, nutritious ingredients. There was no discussion on how refined, processed food items are deliberately created with the tongue's sense of sweet and salt especially in mind rather than with nutritional or calorie content and how such food items are marketed to children.

Recently schools in Braintree, Massachusetts have tried to counter this issue and experimented with a black bean brownie to boost protein and nutrition with children. While these efforts are commendable, I do wish this concept of alternative recipes and foods would go a few steps further. First, it's hard to imagine that students cannot find or create an alternative recipe, such as a black bean brownie, using nutritional content  and open source (such as NUT Nutrition software). Alternative recipes are freely accessible and available on the Internet as well as information about alternative products to standard food items and ingredients. Second, it's hard to imagine that students cannot make an open cookbook using these alternative recipes and with open source such as Mahara. Third, it's hard to imagine that students cannot find local ingredients, such as wild blueberries, to promote sustainability and local knowledge. Granted this is difficult to do in the winter, but even in New York City it is possible to pick wild blackberries in season and make something with it.

It's hard to imagine that the city with the greatest number of restaurants in the country, if not the world, and the biggest school system in the United States cannot devise some kind of contest to promote schoolchildren creating an open cookbook using alternative recipes and ingredients. New York City is home to some of best chefs in the world; people from nearly every nation and, unfortunately, some of the most economically deprived schoolchildren too. In a city that never sleeps and where nearly every nation of the world is represented, it's hard to fathom that schoolchildren cannot embrace such open diversity and culture in the food when they are invested in the creative process.

Healthy food need not be tasteless or flavorless or even costly, but if New York City schools and other school districts across the country want children to eat more nutritious food then perhaps they might start with seeking their input and from local communities. One part of balancing calories is to eat foods that provide adequate nutrition and an appropriate number of calories. However, one does not have to be a dietitian or nutritionist to recognize that there's probably more nutritional content in freshly picked, local, wild blackberries in Van Cortlandt Park in the Bronx than something processed or coated in sugar. Even president Mike Cascione of CC Vending, who developed a computerized system for parents to have control over a child's drink purchase in all New York City schools, conceded last August that "to change a nation, the change must start with the kids."

As a parent who is involved in my child's education and in open source, I am making a resolution this year to heed more attention to my son's health and nutrition. Admittedly, I had already made dietary changes last August, which was no simple task and which I have previously written an article on. And while the Centers for Disease Control and Prevention mention that there is no single solution to ending childhood obesity, it's ironic that they do not advocate children playing a larger role in their own health and nutrition, involving children more, and ultimately taking an open education approach to children's health and nutrition. Make it a game, an experiment, a mystery. Find out if camu camu or acerola has more vitamin C and what you can do with it. Find out where local wild berries grow and why they taste good. Find out who can make the best black bean brownie and what crazy ingredients you can put in it.

The cluelessly incompetent need to be fiored from their school administration positions. They're easy to spot: just ask how they feel about 'political correctness.' If they approve of it, fire them on the spot.