Hacking on health: open source for the rare disease community

Rare diseases are defined as as those afflicting populations of fewer than 200,000 patients, or about 1 in 1,500 people. There are about 7,000 rare diseases, the majority of which are genetically related and commonly affecting the very young (infants). At first glance, rare diseases seem to only affect a small number of people, but in reality their aggregate impacts close to 30 million patients in the US, and about 25 million in the EU alone. This impact also extends to the millions of caregivers and families, who also feel and live with the disease, just in a different way.

A large part of the struggle too exists outside of the disease itself. Due to the nature of rare diseases, there is a great lack of information about them to answer questions related to the cause, the treatment, and the prognosis. On average, a patient visits eight different physicians over a period of 7.5 years before arriving at a correct diagnosis (of their rare disease).

Subsequently, the caregivers and families of the patient often become de-facto experts on the management and care of a person living with that particular rare disease. They become literate on both the scientific fundamentals of the disorder and the practical day-to-day management that it requires. Somehow, they are the equivalent of a DIY community on the healthcare space.

One of the greatest needs in many of these communities is an information management platform, usually called a registry, that enables a user to capture information about a person afflicted by a rare disease, like: daily symptoms, treatments, medicines, coping mechanisms, devices, etc.

Recently, an enthusiastic group of faculty, students, and community participants joined the First Hackathon on Rare Diseases, hosted at the State University of New York at Albany. The group met to develop an open source solution for an information management platform to enable these communities to maximize the benefit and impact of the valuable information they are in a unique position to capture for the wider, greater use. 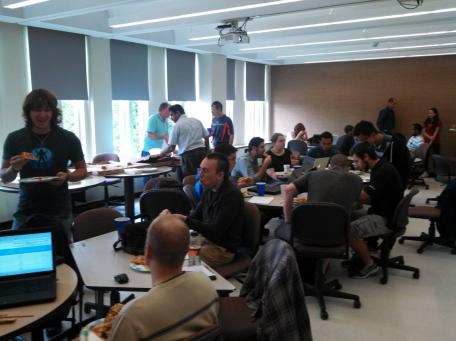 The hackathon group was guided by Ed Fennell, the caregiver for his two granddaughters afflicted with a rare disorder, who has become a passionate advocate for the rare disease community. Ed organized the annual World Rare Disorders Forum at the Albany Medical Center this year. Christy Collins, an advocate for the Macrocephaly-capillary malformation (M-CM) community and web designer, also joined and contributed to the Hackathon.

Read more in this report.

A follow up hackathon is scheduled for Saturday October 26th.

Due to staying far from the community, many people cannot know about the rare diseases. This article can raise awareness. Thank you.

More details in the links below: