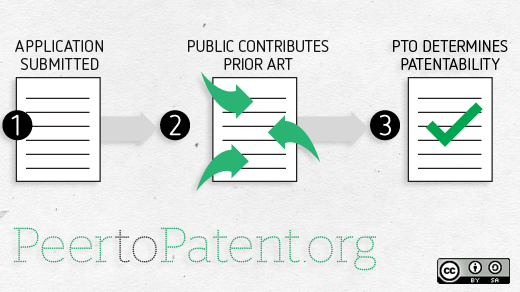 The willingness to collaborate brought us free and open source software.  Now we continue to see that willingness to collaborate permeate our government agencies.  A prime example is the Peer To Patent program developed at New York Law School by Prof. Beth Noveck.  First presented as an idea on her July 2005 blog Peer to Patent: A Modest Proposal, Peer To Patent has become an early success story in actively engaging the public to improve the quality of government decision making.

Peer To Patent works by posting patent applications that have been voluntarily submitted by their owners to the Peer To Patent review process.  Once posted, any member of the public may come to the Peer To Patent website, www.peertopatent.org, and participate in a discussion about the merits of the patent and what might constitute prior art, documentary evidence that someone had previously invented the same device or process (novelty) or that the device or process is merely a combination of previous devices and processes and does not include an inventive step, i.e., anyone knowledgeable in the subject matter would have seem the logic in creating the combination (non-obviousness).

The collaborating peers then search for the prior art to document their views and post it to the Peer To Patent site.  Importantly, both the posting peer and others may then annotate the posted prior art to note why it is relevant to the pending patent applications.  After a few months of this give and take, the posted prior art and related annotations are compiled by New York Law School students into an information disclosure statement that is then submitted to the U.S. Patent and Trademark Office.  Patent examiners then have this information available to them to assist in their determination of whether a patent should be granted.

By improving the information available to patent examiners at the time of examination, Peer To Patent assists in reducing the number of erroneously issued patents, sometimes referred to as improving patent quality.  At the same time the Peer To Patent review can help substantiate the value of inventions claimed in patent applications by providing a more thorough vetting of the claimed inventions.  By helping eliminate patent claims that should not issue and validating those that should, Peer To Patent helps add more certainty to the enforcement of patents, helping to reduce litigation and increase certainty related to patent licensing.

In addition to the U.S. pilot projects, IP Australia has run a Peer To Patent - Australia pilot project in conjunction with Queensland University of Technology with technology assistance from New York Law School.  The results of that pilot are now being compiled, but it appears the results will be quite similar to those in the U.S.  Later in 2010 the Institute of Intellectual Property in Japan plans to run a Peer To Patent pilot in conjunction with the Japan Patent Office.

What to read next
Tags
Law
Mark Webbink 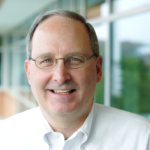 Mark is the former General Counsel and Deputy General Counsel - Intellectual Property for Red Hat, Inc. At present he is a Visiting Professor at New York Law School, where he heads the Center for Patent Innovations, and a Senior Lecturing Fellow at Duke University School of Law.
More about me