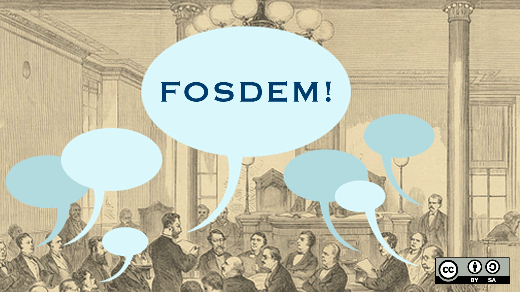 For FOSDEM 2012, held last weekend in Brussels, I had the privilege of co-organizing (with Tom Marble, Karen Sandler, and Bradley Kuhn) the first-ever DevRoom track devoted to discussion of legal issues relating to free/libre/open source software. With several thousand attendees and hundreds of sessions, FOSDEM is one of the largest FLOSS conferences in the world, and surely the largest in Europe. This makes it all the more remarkable that FOSDEM is a free-admission, non-commercial community event, organized and administered entirely by volunteers.

The idea of a Legal DevRoom being untested, FOSDEM's organizers gave us a single day and a relatively small room. Our basic goal was to

distinguish our track from similar ones at other FLOSS conferences, by avoiding introductory material and focusing exclusively on advanced legal and related policy topics. We were pleasantly surprised to have received so many good talk proposals. As it turned out, our 75-person room was filled to capacity for nearly all the talks, and I am told that typically as many as 20 people had to be turned away from individual sessions.

The DevRoom opened with a presentation by Philippe Laurent on how various European courts have dealt with open source and open content licenses in specific cases (a number of which involved audience member Harald Welte as plaintiff).

Next up was Ambjörn Elder, who led a very interesting discussion on the political techniques used by free software advocates to try to influence government policy, and how these efforts might be made more effective through application of approaches used by parallel activist movements.

The inclement weather kept Armijn Hemel from arriving in Brussels for his scheduled talk on tracing build processes to identify a binary's sources. Karen and Bradley stepped in and gave an impromptu presentation on the role of fiscal sponsorship nonprofit organizations in free software.

Dave Neary then gave a lively talk discussing a number of historical examples of gray areas in free software licensing, particulary those associated with combinations of works under distinct licenses. As Dave's examples illustrated, more often than not the answer to interesting legal questions in free software is "maybe."

Allison Randal reviewed the legal history of free software, arguing that free software had moved from a 1960s-inspired emphasis on decentralization and individualism to greater use of formal legal structures (such as project-specific foundations and fiscal sponsorship organizations, along with more carefully-drafted licenses and contributor agreements). Recently, she noted, there seems to have been a swing back to decentralized individualism. I understood Allison to be suggesting that the recent trend represents a failure to remember the historical crises that had led to a perceived need for greater legal formality.

The brilliant Michael Meeks followed with a discussion of the problems that copyright assignment can cause for free software project communities. This was the first time I had met Michael in person; his statements on this subject have greatly influenced my own opinions on the dubious value of maximalist contributor agreements.

Loïc Dachary gave a talk explaining how commercial entities can ethically enforce the GPL without resorting to the notorious and, some would say, corrupt business practices of the former MySQL AB.

John Sullivan and I then gave successive talks that were motivated by recent claims, principally made by Matthew Aslett, that the GPL license family is in decline. John pointed out that such claims rely on data and statistics that are obscure and are likely based on questionable assumptions. For example, it is not clear whether programs of vastly different sizes are treated equally by those attempting to demonstrate a shift away from copyleft. John then discussed the results of his own analysis of the licensing of Debian packages, which suggests increased rather than decreased use of the GPL family.

My talk was rather different (for one thing, it relied on a fair amount of humor, including some good-natured trolling of Bradley). While I am not sure whether Aslett has spotted an accurate trend, much of what I have observed recently from my vantage point as Red Hat open source licensing counsel is consistent with a shift in favor of permissive licensing. Even if such a trend is illusory, there are various historical and economic reasons why we should expect it to have occurred, both intrinsic and extrinsic to the GPL. I concluded with some suggestions for how strong copyleft could be revived by those who support its policy goals and ethical underpinnings.

The DevRoom then featured two panels. One, which I moderated, discussed the implications of the rise of so-called app stores for free software, and included Giovanni Battista Gallus and Hugo Roy along with Bradley as panelists. The other was a discussion on the current state of the  patent legal landscape, moderated by Karen, with Deb Nicholson, Ciarán O'Riordan and Benjamin Henrion as panelists.

The DevRoom closed with a talk by Mike Linksvayer that tied the drafting of the 4.0 versions of the Creative Commons license suite to broader public policy issues.  Mike noted that we face a challenge larger than that of drafting voluntary public licenses, namely that of winning a greater share of public opinion for the view that software freedom is an important social good. He talked about some of the main ideas being discussed by those engaged in the redrafting of the Creative Commons licenses (how to deal with DRM, sui generis database rights, moral rights, and the nonfree NC and ND members of the CC suite; whether to expand or clarify copyleft scope; and whether CC licenses should have a source requirement like the GPL).

Most of the talks were recorded, and (if the audio quality is sufficiently good) are expected to be presented on future episodes of Bradley and Karen's Free as in Freedom podcast. The Legal Issues DevRoom was a great success, and I look forward to helping plan next year's instance of it. I conclude this report by acknowledging our debt to Tom Marble. The DevRoom would never have gotten off the ground or proceeded to flawless execution without Tom's ideas, guidance, and careful planning.

It was great session, I was there.

Looking forward to the podcasts

I found it offensive how the Americans behaved like they owned the place and demonstrated little respect. It was a bit strange that these American law hippies occupied Fosdem and treated people in a very disrespectful manner. We would never dare to go to Boston and do what they did in Brussels.

I agree, to a certain extent. I found the FSF dogmatism to be unhelpful. There were several politically-correct speeches whose presenters were beyond challenge. Maybe next year the room will have a few more Europeans? Maybe even some involved in arranging it?

This comment puzzles me. Which talks were characterized by "politically-correct" "FSF dogmatism"? Even FSF director John Sullivan's talk doesn't seem thus describable. My talk included specific criticism of the FSF, as did Michael Meeks's talk. The speakers were a mix of Americans and Europeans.

Regarding "beyond challenge", it is true that longer sessions would have allowed for more questions from the audience. The schedule we designed reflected the desire to have as many presentations in the limited amount of time we were allotted (while allowing breaks).

The implication of UScentrism seems mostly unfair. It is true that the co-organizers were all Americans, and this cannot be considered completely coincidental. However, early on we tried to get a number of European lawyers as co-organizers. None of those we contacted were interested or available. (FOSDEM, I should note, is the sort of conference I think both European and US lawyers would have a professional tendency to overlook.) We also solicited talk proposals from the <a href="http://fsfe.org/projects/ftf/network.en.html">European Legal Network</a> mailing list, an invitation-only list dominated by European lawyers interested in FLOSS, but received only limited interest. (Full disclosure: I am a subscriber to this list, though IANAEL [nor do I play one on TV].) It is worth noting that the European Legal Network operates its own invitation-only <a href="http://fsfe.org/projects/ftf/legal-conference.en.html">conference</a> which I suppose might have the indirect effect of reducing the natural interest of its members in participating in FOSDEM.

If you have ideas for how the devroom CFP might be better publicized for next year, particularly among Europeans, we'd be very interested in hearing them.

It was strange to have a complete devroom at FOSDEM organised by Americans.

I count 9 EUians and 9 USians among the names on http://fosdem.org/2012/schedule/track/legal_issues_devroom (but 1 of the EUians did not make it, and indeed all 4 organizers are USians).

I was there the entire time except for the opening. I missed the "behaved like they owned the place" feeling, but maybe I'm imperceptive or even was a small part of the problem (I was the last speaker, and a USian). Examples?

I think almost all of the speakers are more aligned with "free software" than "open source" (which I consider a hairsplitting divide anyway) but FSF dogmatism? Several of the talks contained significant criticism of the FSF.

I wonder if the "behaved like they owned the place" was a reaction to the efforts (mostly by Bradley, but [during the Bradley/Karen talk necessitated by Armijn Hemel's inability to show up] also by me) at limiting attendance size in accordance with ULB safety regulations. In addition to the intrinsic importance of such safety, it was very important for the ongoing viability of FOSDEM for the devroom organizers to enforce the audience size limits. The room we were given was small, as I've noted, and most of the talks were being recorded, which made it necessary to provide some guidance to latecomers regarding where to sit and how to get to said seats.

It might be a reference to people being refused access, although with hit-and-run commenters it'll always be impossible to know.
I couldn't get in to your talk; the queue extended all down the stairs and round the corridor. I was rather surprised at the small the room was. I knew that it would be very rammed solid, and so it was.

Only a guess, but perhaps the comment author took issue with the common assumption that US jurisdiction applies? I know, for example, that in my talk I mentioned a US precedent on the copyrightability of collected information, and it was pointed out to me that that only applies in the US, and that Europe has a collection of database protection laws. Similarly, trademark protection, and who can be an interested party in a copyright infringement law-suit, work differently in different jurisdictions.

So perhaps the comment author felt there was too much "this is how it works in the US" going on? I certainly didn't have that impression, but I suppose it's possible.

Tom Marble is collecting <a href="http://info9.net/wiki/fosdem/LegalIssuesDevRoom/Speakers/">pointers</a> to slides and related blog posts.

wow this is real heaven for those guys who working in legal field, Michael Meeks's speech is really great and inspiring.

My presentation is here: