In a world where movies are produced on budgets of hundreds of millions of dollars, at a time when studios expect a huge return on their investment, in an industry where the opening weekend can make or break a film--one man refuses to live by society's (or the movie industry's) rules. One man is willing to put it all on the line and do something different. Something daring. Something... free.

That man is Mike Schneider.

That film is Night Of The Living Dead: Reanimated.

As a horror and zombie film buff, I'm familiar with George Romero's classic 1968 film, Night Of The Living Dead. And also aware of the mistake made by Romero and his colleagues when they released the film without a copyright notice, accidentally making their hard work into a public domain property.

In 2008, Mike Schneider took that work and, in collaboration with other artists and animators, derived a new work based on Romero's film. They replaced the entire visual experience with a series of still drawings, cartoon animations, stop-motion animations, and other visual interpretations of the original work. And in a manner very similar to open source development, Mike collaborated with his team--vetting their submissions, putting them together, and producing a new work. I had the chance to email Mike about this project, and also to interview two of his associates, Rob Hauschild and Peter Gutierrez, on A Little Dead Podcast, where I review genre films, games, books, and more. We talked about the motivations, the goals, and the path to get from the concept phase to a successful project.

But a project is not very successful without an audience. And in the case of a movie, that audience has to be willing to either purchase a ticket to see the film, or else buy or rent the DVD or Bluray disc, or stream it from a pay service like Netflix. A willingness to pay the price to watch the film is the barrier that the producers have to overcome.

But what if that price were free?

Another group with whom I've had the chance to talk is Fewdio, a production group made up of film industry professionals with a shared interest in horror and short films. They produce short horror films and release them on YouTube and on their own website. On my podcast, I had the pleasure of interviewing one member of Fewdio, writer and director Paul Hungerford. He spoke about how their goal was to make films available to their audience freely, while still being able to sustain a business by providing a production DVD that the audience would buy.

With Night Of The Living Dead: Reanimated you can legally download the film, burn a copy of it and share it with your friends--all without having to pay a single cent. Similarly, with Fewdio you can go online and watch all of their works for free. So how does either team plan to make money, or at least cover the costs of producing the works in the first place?

By producing a quality film, combined with enough extras to make the customer want to pay for a copy. The idea is simple: let the audience see the work and, if they like it enough, allow them to buy a production DVD or Bluray that contains not only the film(s) but also extras, things that the viewer would like or which enhance the film. Such things as commentary tracks, foreign language audio, behind-the-scenes films, and more.

And while a fairly radical idea, this is not necessarily a new one. Back in 2006, the band Harvey Danger released the first CD of their CD set Little By Little... as a free download on both P2P networks and as a direct download from their website. Their business plan was simple: if you like the first CD, then purchase the set to get the rest.

And this leads to a benefit for the producers: greater market penetration for their work. With legal and financial barriers lowered or removed, a greater number of potential customers will be aware of the work at a lower cost to the producers. As audiences share the works with their friends, word-of-mouth marketing can easily and quickly make more people aware of the work and increase the potential base of paying customers.

Another derived benefit from this sort of arrangement is that the quality of the work should tend to go up as a result. By opening up their work for free review by their audience, producers will have to invest more into the quality of their product--and not their marketing--to get their audience's money. Everybody benefits when the quality goes up, and the market itself grows.

You can listen to the interview with Paul Hungerford and the one with Peter Gutierrez and Rob Hauschild on the podcast website. The podcast is freely available; Each episode is released under Creative Commons share and share alike (By-NC-SA) licensing. Listeners can freely download, copy, and share it as well. And my hope is to spread the word about projects like Night Of The Living Dead: Reanimated and Fewdio to as many people as possible.

What to read next
Tags
Licensing
Business
Darryl L. Pierce 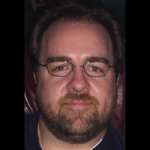 After seeing the movie "War Games", I was obsessed with computers and what they could do. But after playing games for a few weeks, I grew bored and wanted to know HOW computer games were made.
More about me